Skylar no longer has time for basic news. If I'm being honest, I'm jealous of the result, but not of the means and methods to get to that result.

Medical school rotations are somehow even more miserable than my worst expectations. I'm talking about my experience with them, of course. I don't know how Skylar feels about it all, exactly. I can only make an educated guess by collecting the evidence and scrutinizing it. Bags under his eyes. His mysterious disappearance every morning before I wake up. The perpetual state of verging on tears.

He slumps into the house every evening and inhales whatever slop I've just finished cooking. "I only have five minutes," he'll say. That means he's about to take residency on the west end of the couch, put on noise-canceling headphones, and study until midnight.

"What happened today in the news?"

I admire the desire to stay up to date, and I envy the ignorance in These Unprecedented Times.

But what an incredible amount of pressure to put on little old me. I'm exclusively responsible for curating his view of the world. If I don't want him to know about something like, oh, say, an insurrection at the Capitol, I can basically keep that information from him. I can shape his world view in any way I'd like.

"Well there's a new strain of Coronavirus that has now reached the United States," my brain tells me to say.

"Someone blew up an entire city block in Nashville," I feel compelled to inform him.

"Our state legislature is currently trying to codify their overwhelming trans and homophobia, once again," I start to bombard him.

But then I stop myself. I say none of it.

"Honestly, everything is looking up."

He doesn't believe me. I know he doesn't. But I don't think it really matters.

Sometimes you just need someone to tell you things are looking up.

This time in Strangerville, Meg’s children thinks she might be having an affair with Eli, why do people work so much?, and Eli recounts a memory of seeing locals show up on early reality television programs. Story: Utah’s Reality Pioneers, by Eli 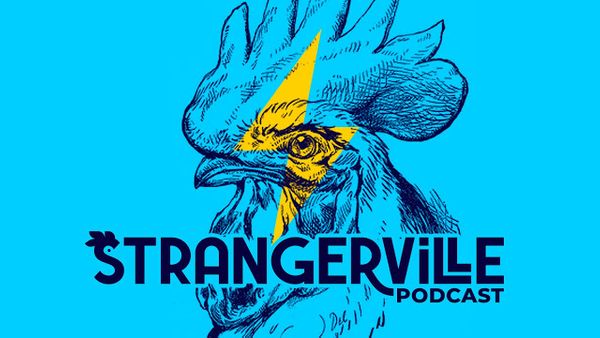 A couple of quick things: First, your comments on the Shannon recap [https://www.itjustgetsstranger.com/2021/01/shannon-recap-of-1961-byu-film-about.html] are giving me life. Also, SOMEONE IN THE COMMENTS LITERALLY