We visited my parents on Saturday night to bring them dinner as they (hopefully) wrap up their attention-seeking brushes with covid death. We've been texting them every day for updates on their condition and the last several have been very positive.

Yesterday my dad informed the group he had had a good sleep and was feeling better than he has felt in three weeks. He went on and on about how he was getting stronger and had more energy. After a long text update my sister responded "great! And how is mom?" And I don't know. I guess it's because I was tired, but I suddenly imaged dad texting back "oh, she died in her sleep" and I could not stop laughing for most of the rest of the morning.

I KNOW THAT'S NOT FUNNY. If anything happened to my mother I would slowly walk into a cold lake holding flowers up to my chest as a sad Enya song played in the background. I would obviously be wearing a black dress and mascara tear marks would be present on both cheeks.

The point is, I think this terrifying experience with my parents has taught me that nothing can really kill my dark humor.

In any event, Sky and I were so relieved to see both Bob and Cathie looking much better than the last time we had seen them when we stopped by on Saturday.

We chatted with them for a few hours and eventually my mom remembered she had something for me. She retreated and returned holding a vintage book of knitting needles my great grandma Hinkle bought in the 1940s or so and used for the rest of her life. She died in 2004 when I was on my mission in Ukraine.

"You're the only knitter in the family," my mom told me.

My mom has always been exceptionally crafty, and so in her later years grandma Hinkle decided to gift her all of her knitting supplies. Grandma knew my mom was a quilter and not a knitter, but she figured if anyone in the family would ever find a way to make use of these things, it would be my mom.

Her prediction was sort of correct. Mom has never picked up knitting but she did produce an extremely homosexual son with a significant anxiety problem who figured out a few years ago that knitting was soothing.

And so, ta da! I have now inherited grandma's knitting needles.

They even come with some tags she had embroidered to say:

I almost started crying when I saw them. I adored my great grandma Hinkle. She was a feisty and fun-spirited woman who taught me to play poker when I was 9. She was like a second mom to my dad while he was growing up down the street from her house. I think because of this, and because grandma and grandpa Hinkle were so much like my parents in a lot of ways, we had a very close relationship with them while I was growing up.

I still feel very connected to both of them. Grandpa's paintings hang throughout my house and I've always felt like I had such great reminders of him because of it. But this is the first time I've had something—an actual object that connects me to grandma.

I think that's a little silly—to care so much about objects. I'm no hoarder, but I've always attached sentiment to some things. This weekend when I pulled out grandma's knitting needles and started using them—the same needles she started with now 70 years ago—it almost felt like her hands were on mine, making some mistake-laden sweater. As dumb as it sounds, I felt us occasionally sigh together and shake out our tired wrists.

We both look forward to passing on the needles to some future generation. And we both look very much forward to our next game of poker.

And now, please enjoy some Strangerville.

P.S. In the below episode I discuss at length pictures that supposedly show a demon at a child's birthday party. I have shared those pictures on our Patreon so if you would like to check them out, now would be a great time to completely empty all of your bank accounts and become a Strangerville Patron.

This time in Strangerville, Eli’s family is being haunted! Meg didn’t get celebrated enough on International Women’s Day. And a piece about how our perception of online dating has evolved over the past two decades.

This time in Strangerville, Meg’s toddler chopped off his own finger and Eli is VERY sorry for how funny he thinks this story is. And a woman has a perfect day that ends in an incredible coincidence on a Canadian beach. Story: Coincidence, 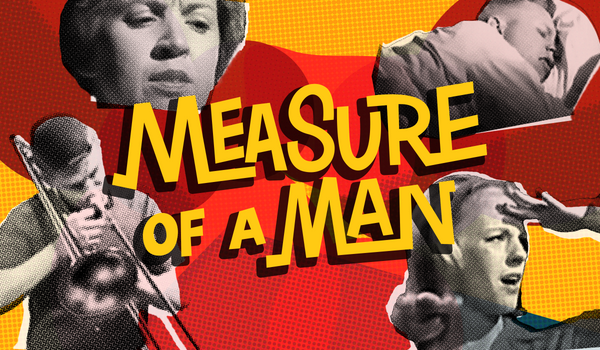 Ever since I started recapping bad old Mormon movies people have been telling me I “must” check out Measure of a Man. It appears to be a 1962 film produced