"I can't find the charger for the drill," the ominous text said without any further explanation.

I started typing back. The first word of my text was "why," which I then deleted in a prompt about-face when I realized that sometimes it's just better if I don't know.

Later that afternoon I located the charger, only a moment before I noticed a small pile of lumber on the back patio. I started another text that began with the word "what," but I deleted that one, too.

I did not marry a handyman. But I did marry a man with the confidence of a handyman. I learned this not long after he moved in during the winter of Year of our Lord Cher two thousand and sixteen.

"We should just knock out that back wall and turn it into large French doors."

"Just." He used the word the way one might when deciding what to cook for dinner.

"And how do you propose we do that?" I asked him, out of genuine curiosity.

"Hammers." He said it with his eyebrows raised and head tilted down, slowly nodding, like he was embarrassed for me that I didn't already know.

I was able to talk him out of his proposed career in reckless demolition, but only after directing his attention to the fact that the ceiling at the back of our house slopes downward, leaving the back wall only five or so feet tall. "You won't be able to fit your French doors there," I told him. He sighed.

Skylar arrived home an hour or two after I started charging the drill. He dropped a bag of supplies from Home Depot onto the kitchen counter. The clanking sound they made suggested this was substantially more than a few screws.

"Don't worry. I recruited Courtney to help me," he explained, anticipating a number of questions that might include "is my time and attendance expected for this mysterious project" and "do you know what you're doing?" Courtney, his med school classmate, as far as I'm aware, is not known for power tool proficiency. But she is going into surgery. I wasn't sure whether those skills transferred, but I decided not to ask.

An hour later I heard the sounds of a very gay man whistling over the unambiguous friction of a dull saw being dragged at no constant cadence across a dry two-by-four. It was at this point I could no longer settle into blissful ignorance.

"Ok. I'll bite," I told him, after finding him shirtless, wearing slippers and sweatpants, on the back patio next to a bucket of white paint and a pile of supplies that didn't seem to have a logical connection to one another. "What are you doing?"

"I'm building something for my cute new wisteria vine to climb up to the top of the covered patio." He sounded so excited. "Courtney is helping me. I'm paying her in hugs and kisses."

This seemed like it was going to be entertaining enough, so a moment later I poured myself a strong mixed drink, parked a lawn chair under a tree, and began watching, like this was a tv show. By the way, I have a new idea for a tv show.

The construction concluded around 11:00 PM. He planted the wisteria the following day and paraded me out to the backyard to admire it.

"Isn't it beautiful?" he asked.

"Now imagine how nice it will be one day to view from our French doors." 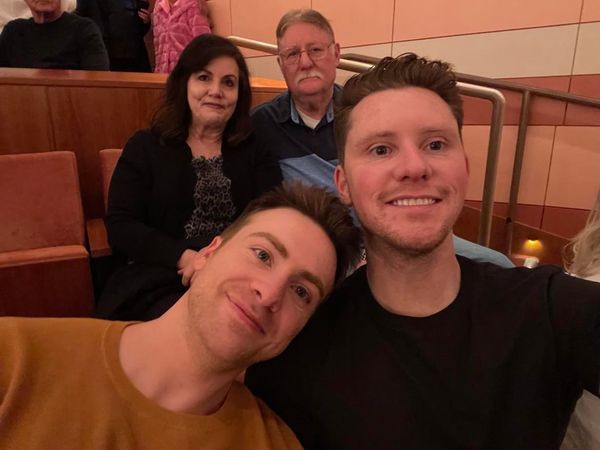 "What color are my eyes?" Skylar had shut them before he asked me, a measure aimed at preventing me from "cheating." "Dazzling?" My answer was rejected because "that's not a