"What color are my eyes?" Skylar had shut them before he asked me, a measure aimed at preventing me from "cheating."

My answer was rejected because "that's not a color."

It really was unfair of him to put me on the spot like this. How was I supposed to just know what color someone's eyes are? I was well into my 20s before I even knew my own. It just occurred to me one day that I wasn't totally sure. I pulled out my driver's license to investigate. "Blue," it had said. Then I asked someone nearby if they could verify this for me.

"They're green," my disappointed husband told me after opening his eyes. "How did you not know that?"

I told him not to take it personally. "I sat across from Meg for over two hours this morning in a recording studio and, gun to my head, I could not even begin to tell you a broad general description of what she was wearing."

I really meant that. Not a clue. Was it a dress? Pants? A colorful jumpsuit? Was she wearing a hat? Glasses? A wash off face tattoo? I don't know.

Offer me one million dollars to tell you what the tile looks like in the bathroom at my office I've seen every day for almost ten years and I would respond by saying "there's tile in there?"

It's always been this way. For a long time I thought maybe I was just dumb, but then a few years ago I heard about other people who have a hard time picturing detail. I've had friends who can describe with alarming specificity every inch of a painting they saw one time.

I planted some flowers in a pot 25 minutes ago and I'm not sure, sitting here now, what color they were.

For years I've believed police sketches of suspects were a hoax. If a cop asked me to describe my mother I would say "well, dark hair and a mom face, I guess." He could show me a photo of Diane Keaton and ask if that was her and I would legitimately respond that "it's possible."

You think I'm joking, but one time several years ago I followed a woman around a store and tried to get in her line of vision to see if she would recognize me because I thought it might be my mom. It wasn't. Or maybe it was and she was not speaking to me at the time. I'm still not sure.

"I don't know that you're in a position to judge," I told Skylar, the man who asked me what my middle name was as we were driving to our wedding.

He has to look up my birthday every year.

"Oh just text it to me," he said recently when I tried to give him a shopping list three items long. "I'll never remember all that."

A while ago Skylar told me it was "unfair" that I can remember, verbatim, conversations we had had, sometimes years after the fact. "You shouldn't get to win arguments just because you can quote myself back to me," he had said.

One day we'll be watching a sunset, both inspired. Or we'll be delighted when our child takes her first step.

Then I'll have an idea.

"Quick—describe it for me so I won't either."

This time in Strangerville, celebrity meetings, a walk through Strangerville history, and Whitney Call takes the Strangerville Live stage to share a story about a very uncomfortable blind date. 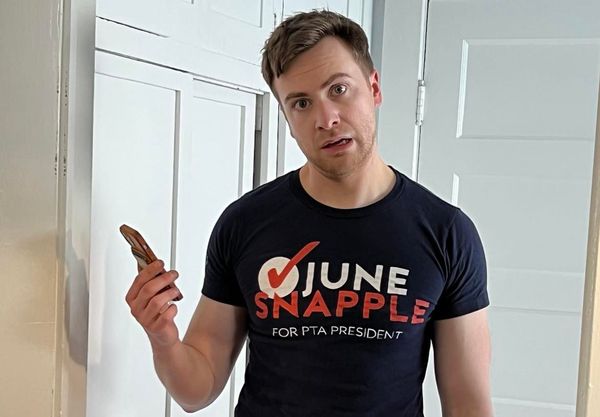 "I can't find the charger for the drill," the ominous text said without any further explanation. I started typing back. The first word of my text was "why," which I