Almost the exact moment I published my last update on Stranger last Thursday, mere seconds after I typed the words at you "I haven't lost taste or smell at all," I suddenly couldn't smell anything.

It really did hit that quickly. I had, just that afternoon, opened a window and felt a breeze and I remember thinking, "ah. I love the smell of fall. I may be sick, but at least I can smeeeeeellllll falllllll."

Then I wrote to you, got up from my computer, and decided to make some dinner.

Skylar had gone out and bought various groceries at my request. Last week I was so unbelievably bored, but I couldn't get myself to do anything about it because I felt so hopeless and miserable.

"Buy some supplies," I had asked Sky on Wednesday. "Because the moment I feel up for it, I want to start cooking. At least that will give me something to do."

Cooking has been a comfort task for me for nearly 20 years. I didn't grow up cooking much, but when I got to Ukraine on my Mormon mission, I learned to find it soothing. I think it's because it made me feel less homesick.

I had this apartment in L'viv, in far western Ukraine just on the border of Poland. I lived in it for 6 or 8 months, which is an eternity when you're a 19-year-old missionary. It's where I lived through my first Ukrainian winter. It's where I was living when I found out two of my grandparents died.

The building was hundreds of years old. The apartment ceilings must have been 20 feet high. It was extremely drafty. I remember lying in bed at night, the room lit by the moon outside just above a courtyard, and I could see my breath. I couldn't believe how far away from home I felt. The only heating we had in the apartment was an old tile "pichka,"—a tall masonry oven that ran from the floor to the ceiling. We would light a fire in it from wood we had collected, and then we'd shut the oven door. The tile on the outside would radiate heat. On especially cold nights, I would get up, wrapped in a blanket, and stand against it until I couldn't stay awake any longer.

We had a large kitchen with a wood-burning stove. I didn't know how to cook but I found a small binder—a makeshift cookbook—in one cupboard. It had 20 or 30 recipes and it had been put together by a former mission president's wife. It was a cookbook for people who didn't know the first thing about cooking.

I decided to cook my way through this cookbook. I was the first Julie & Julia. And by the time I finished the project, I knew the very basics of cooking.

Every day, we'd come home to that cold apartment. I would put on an oversized sweater. I'd make some tea. I'd turn on some music. And I'd just cook in that big drafty kitchen. If I close my eyes and picture it—my thin youthful self, learning to mash potatoes or peel beets—the nostalgia nearly overwhelms me.

I don't claim to be a great cook now. I should be better than I am considering how much time I've spent doing it. I'm good at making up recipes but not at following them—I usually find following recipes tedious. I like the process, but not the concentration.

When the Pandemic began, I, like a lot of people, went into cooking overdrive. It was one of the most important things that kept me sane. I looked forward to it every day. Right at 4:00 or 5:00, I'd put away my work, go to the kitchen, pour a glass of wine or tea, depending on how judgmental I thought Sky's eyebrows might be that day when he next walked through the room, queue up a podcast, and start chopping, peeling, boiling, baking.

Suddenly I'd be back in eastern Europe. Stressed, worried, a little sad, and then promptly warmed by the smell of fresh dill.

I've received messages from a number of people in the last year, telling me that Strangerville was a comfort podcast for them during the Pandemic—that they listened every week and felt connected with this community.

It obviously warms my heart to hear that, but also, I totally get it. Making Strangerville did that for me. But I also had my own comfort podcasts—usually about movies or Survivor—that made me feel normal when things were very not normal.

On Thursday night, just after writing to you, I started chopping garlic—a lot of garlic. People keep telling me to eat garlic. It hit me just as I was putting a baking sheet of garlic and brussels sprouts in the oven that I hadn't smelled any of it.

Over the next few minutes, I frantically started pulling spices from the spice cabinet and sniffing them one by one.

Not even a faint whiff of it.

I knew this was something that happened with Covid, but I guess it never occurred to me that this would be a scary thing to experience until it happened. Scary. Terrified. Suddenly, running through my mind was a panicked "what if this is permanent?"

I know so much of my reaction was a result of feeling crummy and hopeless in the first place. I know that. But, in my fatigue and fear I just felt myself fighting back tears.

I tried to explain it to Skylar when he got home. "It's like trying to smell through your elbow," I told him. "Nothing. I can't smell anything."

It's not simply losing the sense of smell that is so terrifying—it's the thought that it could be permanent. Most people slowly get it back, per the internet. But I've heard from several who have now gone a year or more without any improvement.

I think having Covid, mild as my experience has been compared to so many others, has given me some perspective on the Pandemic that I just didn't have before. It's made me feel so impressed with the people I know who have had it already and, now looking back, seemed so calm and brave considering what they went through.

On Saturday I started making soup. I chopped an onion. A podcast was playing. Duncan was curled up near my feet—he's been very clingy to me since I got sick.

I pulled out some dill and began sprinkling it into the pot. A very faint, almost imperceptible scent of Eastern Europe came over me. I held the dill up close to my nose and sniffed. Suddenly I was in a Ukrainian kitchen, slightly homesick, glancing out a window into a courtyard where a babushka with a headscarf was sprinkling dirt from a bucket onto an icy walkway.

I closed my eyes, smiled, and fought off a tear of relief.

This time in Strangerville, Eli has Covid and it’s very sad, Meg can’t be a vegan because of cheese, and a woman accidentally gets stoned right before giving her daughter dating advice she now can’t remember. 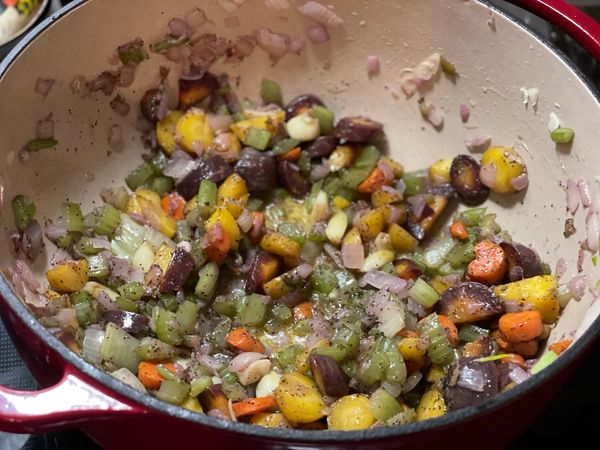 I forgot this is supposed to be a cooking blog and I haven't given you a new recipe for a while. Here's my mom's minestrone soup recipe, which I've been

This time in Strangerville, Eli has Covid and it’s very sad, Meg can’t be a vegan because of cheese, and a woman accidentally gets stoned right before giving her daughter dating advice she now can’t remember. Story Accidental Stoning, by Tara