If you follow me on any social media, you might be aware that I've been The Most Sad And Tired Man In The United States Of God Bless America for about the last ten days. The moment breaking news began to report the bombings on the outskirts of Kyiv, what was it? 90 years ago? I don't know. The last week has been so long that you can see it from space. But, the moment they began to report that, my heart fell clean out of my body and it hasn't beat since.

I spent the next three or so days doomscrolling through news and in constant communication with several friends spread out over western Ukraine. I don't know that I slept more than two hours a night during that time.

I kept asking my Ukrainian friends what I could possibly do to help them and they kept repeating, over and over, that the best thing I could do was write about Ukraine and tweet about it so people in the United States would know what was going on. I certainly did that, constantly, for days on end.

Then last Sunday rolled around. That evening I was sitting on my couch, reading truly heartbreaking messages from friends in Ukraine while CNN played a parade of horribles for me on the TV on the opposite side of the room. I felt like I was about to burst. I texted my dear childhood friend Michelle Pearson, who also lived in Ukraine back in the early 2000s, and told her "we need to do something about Ukraine."

She was in the same place mentally as I was and she agreed.

I then tweeted out:

I'm telling you, within minutes, dozens of people started messaging and texting me to offer to help. By 10:00 PM, just as we were getting ready to go to bed, I started reading all of the messages I was receiving from people to Skylar, while also manically running through a thousand ideas for putting together a fundraiser.

"We're not going to bed anytime soon, are we." Skylar said, more than asked.

By the next morning, we had booked two venues for two events to be held the coming Friday and Saturday. I was now texting with literally over 50 people at once to arrange various elements of the events. And by the middle of the day, I was on the verge of an actual nervous breakdown. I mean that literally.

I was driving down a street to my office, sobbing my eyes out because I was stressed and sad and hadn't slept in five days now. I had mascara running down my face. And I don't even wear mascara.

That evening, Skylar and I attended a large rally for Ukraine at our state capitol building. As we drove away and I started breaking down crying again, Skylar turned to me and said "you can't do this alone and you can't manage all of this."

He quickly started taking tasks from me, texting people to tell them to communicate with him and not me for the remainder of the week, and performing a mountain of tasks I may never fully realize. God, I love that man.

Jolyn called me and offered to join my friends Kellie and Brigham Daniels in fully arranging two intricate silent auctions. "Don't think about the silent auction again," she told me. "It's handled."

My friend Becky Pickle who has a name that you have to say in full every time you reference her because it and she are perfect, called me and let me know she had found and booked two incredible venues who offered to donate their space, that she was going to handle all food and drink arrangements, and that she had already found a handful of silent auction items to include. I am not only going to name my children after Becky Pickle, I've already started naming your children after Becky Pickle.

Unita Brewing reached out and immediately offered to supply all the drinks through a very generous monetary donation. "This is exactly the kind of thing we want to support," they told me.

My dear friend Shireen Ghorbani offered to emcee the event and arrange for live music.

Skylar took over all decoration duties, locating designers who gave their time and supplies to give the event a breathtaking Ukrainian theme, including the florist who did our wedding, Native Flower Company. They prepared gorgeous sunflower and dill arrangements to be placed throughout the venue.

Multiple graphic designers worked with my friend Kathleen Sykes to put together a beautiful website so quickly that I think it may have been illegal. We titled the events Strangers in Ukraine, because, obviously.

My very dear friends and real life superheroes at Equality Utah called me and told me that since I obviously didn't have time to create a charitable organization, they would convert their digital infrastructure and donate their personal time to collect and track all donations for us throughout the week, which donations would then be paid out equally to two humanitarian organizations (Razom and Lifting Hands International) we had chosen, both of whom are currently on the ground in Ukraine and at its borders providing food, medical supplies, refuge, etc. to Ukrainians.

Donations began pouring in. Nearly all of our local news stations and public radio stations started running stories on our efforts, giving us amazing advertisement. I've done so many media interviews this week that I've either become very good at it or I've doubled down on bad habits I'll never be able to fix.

Lovely reporter Lincoln Graves additionally released a few clips of our interview that were not used in the larger piece.

KSL dropped a nice written article on the efforts as well.

When I tweeted out last Sunday that I wanted to do an event, I literally thought at most we might raise $5,000 or so. I told myself I'd be very proud of that.

Thanks to the overwhelming support and a few match pledges from several incredibly generous people, we ended Saturday with just under $118,000 in financial donations, 100% of which will be paid out to the two humanitarian organizations since we did all of this with zero overhead cost thanks to everything being donated to get the events up and running and the funds collected.

I still can't believe it. I immediately tear up when I remember this.

Donations have continued to trickle in today, and we've received one more significant pledge that will be collected early in the week. Because we are collecting a couple of pledges hopefully in the next couple of days, we will leave our donation link live until then. We are hoping to get a final count (which I'll announce) in the next day or two and then we'll be transferring the funds so they can be put to use right away.

The events were incredible. I'll have photos from photographers who donated their time and will be sending me professional shots later. But here are a couple of videos I took. The first is at Publik Coffee on Friday night, just as we were finishing getting set up for the evening. (We had around 150 people in attendance that night).

The second video is of us getting things set up at Cactus & Tropicals in Salt Lake City on Saturday night (where we had about 90 in attendance).

Both evenings we had a few speakers share some thoughts, including some Ukrainians, a representative from one of the humanitarian organizations, Michelle Pearson, and yours truly.

We live-streamed the Saturday program through my Instagram. You can watch/listen to it now.

None of it would have been possible without the incredible community we have who rose to the call to show up for a community on the other side of the world who is currently trying desperately to show up for itself.

I hate that it took this senseless tragedy for this to happen, but after seeing everyone come together in love and support, fully inspired by what we've seen from these beautiful and brave Ukrainian people, I can't help but wonder if one of the greatest gifts they're giving the world is their example. I hope we don't disregard the lessons we are learning now about what it means to love your neighbor and be there for them. I hope their sense of morality and passion and charity will be baked into us just like I believe it is baked into them.

Sometimes the most heartbreaking destruction paves the way for the most beautiful healing.

That doesn't justify the destruction. But maybe it gives it some meaning to those who are suffering.

I love you. I love Ukraine.

Thank you for showing up.

This time in Strangerville, Meg went to her neighborhood caucus and had a wild time, an explanation about the current happenings in Ukraine, and Eli launched a fundraiser. Story Ukraine, A Brief History, by Eli McCann Production by Eli McCann & Meg Walter Join our 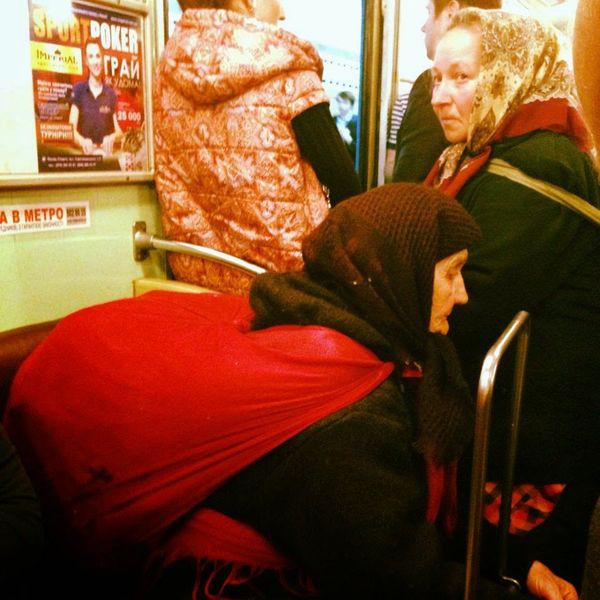 In light of recent events, and feeling somewhat helpless and sad, I thought I'd try to give a concise overview of the recent history to help anyone interested understand what