I called Great Grandma Whittle a little over a week ago to see if Micalyne and I could come by so Micalyne could interview her for a paper she needed to write but grandma told me that she had fallen onto a chair the day before and cracked a rib so we decided to postpone the appointment. Grandma told me over the phone that she just wanted to stay low key that day so she would hopefully be feeling better the next morning to get out and watch the kids do the Easter egg hunt.

I called grandma again today to see how she was feeling and asked if I could stop by to see her. She sounded thrilled and then asked as though this was a business deal, "do you want to some work?" I told her I would love to but I had a meeting so would only have about 45 minutes but would get done what I could.

When I got to grandma's, she walked me out to her backyard and showed me a patch of dirt that was filled with weeds and she asked me to clean it out so that another time we could dig out her five rose bushes and move them over to this spot. I thought grandma would just go inside and rest while I worked on this but she was back out there with me about two minutes after I got started with a coat, gloves and a light peach handkerchief over her head like she was ready for some heavy labor. I asked her several times if she just wanted to go inside to stay warm but she kept saying that the fresh air was good for her as she bent over to pick up twigs that were littering her driveway. I thought about stopping her and found myself wanting to get in her way and pick up anything she was bending down to get but then I realized that this woman has lived more than four times longer than I have and is perfectly aware of what she is capable of so I should stop treating her like she's a child.

We worked for a little while--the entire time I was a nervous wreck because as much as a perfectionist as I am, I know that I get it from my mom's side as it's diminished slightly with each generation; my great grandma, therefore, has three generations more intensely perfectionist characteristics than I do and I was terrified to have her evaluate my work. At one point I asked her if my work was up to her standards; she just laughed. She never did answer me though.

Finally grandma agreed that the work was good enough for the day and I went in to wash my hands quickly. When I came back out, grandma was hunched over sweeping a pile of twigs into an old dust pan. I tried to take it from her but she just laughed and said "for heaven sakes, you're going to be late for your meeting if you don't go now! I can take care of this." I watched her for a little bit before I finally left at her several demands. Her old wrinkly hands scooped the brush into the dust pan and it seemed so interesting to me that those hands have done so much for so long. For a century they've cared for people, they've worked, they've served and now, in 2008, they were scooping up brush into an old dust pan. I don't know why that seemed so strange to me or why it was that watching grandma do this when she knows very well that there are hundreds of people that would be happy to do this for her made me respect her so much more when I thought I really couldn't respect her any more than I already did. But she finally looked up at me, handkerchief still around her hair, and smiled at me really wide, told me she loved me and then sent me on my way. 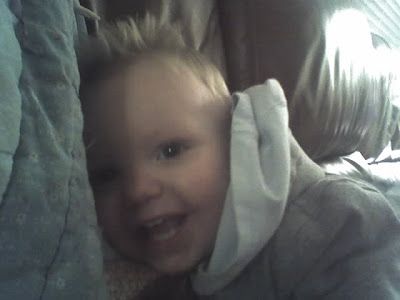 Please tell me this picture makes you smile. A lot has happened in the last week and I thought I would update everyone as orderly as possible. No, that's too

First of all, I want to update everyone on canker situation; as of tomorrow morning, I believe that my final canker will be entirely healed. So many of you came through for me during this very difficult time and I want you to know