First of all, I want to update everyone on canker situation; as of tomorrow morning, I believe that my final canker will be entirely healed. So many of you came through for me during this very difficult time and I want you to know that I tried every one's advice (literally at the same time) and I credit the healing process to each of you. This was a group effort and I think we are all a lot stronger now because of it.

I was recently going through some old things and I came across a stack of letters I wrote to my mission president each week in Ukraine. We were strongly encouraged to write a letter once a week to our mission president and at the end of our missions, he gave us back all the letters we wrote--I guess for me it was so I could re-live how dramatic I could be at times. But it was fun to read through some of them again and bring back some of the interesting memories.

I came across one that I wrote on November 7th 2004. This was a particularly trying time for me. I was in a newer area full of challenges that seemed insurmountable to me at the time. On top of that, I had been assaulted in the street about a week previous to writing this letter and had become quite discouraged because of that. But despite the difficulties and the heaviness I was feeling, it was still a time of miracles, some of which I written about in this blog before.

This letter is interesting to read in light of some of the very different yet real challenges I face now, almost four years later. The story I wrote about is one I've thought about often since 2004 and each time I do, I take something new with me. The letter reads:

"I once ran a race in college where at some points the water went up to our knees and at all times the mud was at least deep enough to cover our feet. It was pouring rain and everyone was covered with mud. I had developed a stress-fracture on my left leg in the months leading to this race and was forced to take some time off but against the doctor's orders, I ran the race--you see--it was the most important race of the year and if I didn't run, it could have hurt my team's outcome. We ended up losing by only a few points. Sometimes life feels like that race--I mean--often we trudge through the more difficult times just sloshing through ice-cold water up to our knees only to get to the "better" times where the mud is still deep enough to cover our feet. And we rarely find ourselves running downhill on short-cut grass on a beautiful cool day. Trying to understand these things can be frustrating but then I remind myself that the training schedule of an Olympic athlete doesn't usually consist of taking a bubble-bath. They run up mountains. They swim across lakes. They do those things because they make them grow. They could sit around all day--it would sure be easier. But they can't afford to do anything other than that which would make them a good athlete and I think that's how Heavenly Father works with us. He could detour the route onto a beautiful golf course but he knows that we can't afford to do anything less than that which will really make us grow-- so he sends us uphill into a swamp. I'm grateful for a God who does things like that." 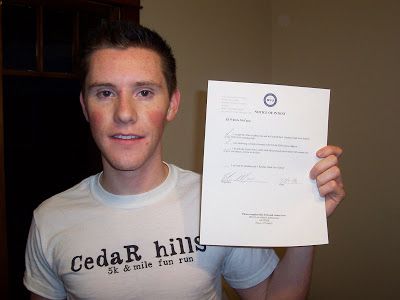 Just when you thought I couldn't possibly get any more ambitious (ha ha), I got up at 6:00AM today and did a killer abs workout with Jason for about