I thought I would share some thoughts I've had recently. My church has recently been under a lot of attack for the support which many members of my church provided in passing proposition 8 in California last week. I am LDS (a Mormon) and over the past few months, many members of my church did a lot of work in California to garner support for the proposition amid a lot of opposition. Interestingly, the attacks toward the church have generally involved accusations of hate. While I can understand that it is common and justified to feel very strongly when someone disagrees with you, I am sad that support for a value has to be construed as hate. I have tried to see both sides of the issue, and I believe that the arguments on both sides are good, and often grounded in love. And I wish that that was the focus. The truth is, I don't hate anyone who disagrees with me on any issue. I simply disagree. So I'll vote one way and stand up for what I believe in, fully expecting the opposing side to stand up for what they believe in. I don't assume they hate me because they disagree (although they may) and I hope that my vote doesn't have to be seen as hate either. Nonetheless, I can't control that; I can only let my voice be heard and pray that any issue can be discussed civilly and respectfully.

Attacks on the church are nothing new. For thousands of years people who have tried to live virtuous lives, to improve themselves and serve others, have been mistreated and despised. Often this poor treatment is against those who truly do live lives of hate under the guise of spirituality, corrupting pure principles and causing pain and sorrow to others. For this it can often be easy for the world to attack religion as a whole and paint it with a very dark face, blaming it for the world's sorrow. Unfortunately, those who really do try through their faith in God to make the world a better place are often on the receiving end of violent persecution as well. My church specifically saw a lot of this in the 19th century as its generally peaceful members were beaten, pushed, and in many cases murdered simply for believing in God in a different way than the world was used to. They weren't hurting anyone. They were just trying to find a way to come closer to God; to serve others; to make lives happier--and not just theirs; generally, they were just trying to find a way to make the world a better place for any who would allow them to. Since then, the church has grown despite its demanding nature. Millions upon millions of people are kinder to their neighbor because of the church. Their lives are less complicated because of the true and tested principles the church teaches. People who felt they had no chance to be happy in this life before finding the church are happier than they ever could have been.

As I was thinking about the protests and genuine meanness that is being thrown in the face of the church now, I thought about one story in The Book of Mormon. There was a man 2,000 years ago that decided he wanted to help anyone who would let him. His name was Samuel and he went to a very corrupt city and stood upon a wall and began talking to the people about what it means to be truly happy. He talked about being kind and having faith in God. He talked about things we could all benefit from today. Some of the people listened to him and dramatically changed their lives for the better. Many hated him for what he said. They hated him because he disagreed with them. I imagine they assumed that because he believed differently than they did that he must have hated them; this could not have been further from the truth however, as his message was to love all men, no matter what they do.

The most interesting thing about Samuel's story for me is that even as the people began to throw stones and shoot arrows at him, he stayed on that wall and stood for what he believed in. And because he stood firm "the spirit of the Lord was with him, insomuch that they could not hit him with their stones neither with their arrows." And when the people saw that he couldn't be hurt, many more listened to his words.

We too, when faced with seemingly insurmountable opposition when the adversary slings its figurative stones and arrows at us for standing for something that may not be popular, will be blessed with the spirit of the Lord even so that we cannot be hit. And in a world that seems to be lacking in people that will stand firm for their principles, there's no telling what kind of work that example will do. 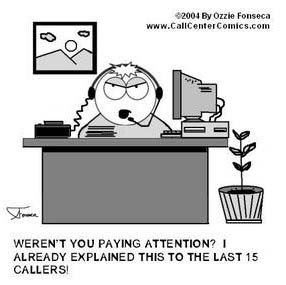 This one is for all of you who have ever called tech support. Or customer service numbers for that matter.I had quite the fantastic experience this week which I