Sunday afternoon my friend and I went out to a gigantic park (the biggest one I've ever seen in a city) and walked around through some amazing orchards near the banks of the Moscow River.  Eventually we found a pretty good band performing the Beetles' "Back in the USSR" on the street, the stars of the Kremlin in the background. This was interrupted by the two teenage boys who asked us if they could have their pictures taken with us (that's about the 50th time that's happened since I've been here). Already used to being celebrities by nature of being foreigners which Russians can tell just by looking at us (something I still don't understand), we posed like champions for about 20 shots. Watched the half-naked drunk guys dancing in front of the band for a while before heading home.

Monday was my birthday--I didn't tell anyone except for my 2 friends in the area office down the hall who brought me a Russian cake at lunch time. Monday night the three of us went exploring in the city until we found an authentic Ukrainian restaurant which was actually pretty well done. And the food was amazing. Made me excited to get back down to Ukraine because the food in Russia has been mostly below par (and in some places VERY below par). The food was always good in Ukraine.

Tuesday the legal counsel working in Kyiv and his wife came to Moscow and they will be working with us for the rest of the week. He's a judge from D.C. and has some pretty cool stories. We all had dinner together at my supervising attorney's house on Tuesday night.

Work has been pretty interesting this week. We've spent the week looking at Ukrainian visa issues and plans for the Kyiv temple. This has all been very fascinating for me of course. The legal work of the church is far more complicated than I ever imagined and there are so many unique issues the church in this area is dealing with on a regular basis that I never would have thought about before. When President Monson said in a recent conference address that we should be praying that doors would be opened throughout the world for the church to be able to function, I really just thought about the areas the church isn't in at all. It's been really interesting to see how many more doors the church needs to have opened in these areas where we already do have a relatively strong presence.

Last night I went into center with my boss's daughter to check out some churches. She's an attorney who graduated from BYU a couple of years ago and is in town right now visiting. For some reason most of the churches were closed last night so we mostly just walked around a lot but we did find one that may be my new favorite. It's buried away in a little neighborhood not far from the Kremlin. It sort of looks like a smaller version of St. Basil's (very colorful and decorated onion domes). It was closed so I'll be heading back there later this week to check it out. I'll get some pictures of it too while I'm there to show you all.

It took me over two hours to get to work today. First the shuttle I take to the metro didn't show up so I had to wait an extra half hour for a different one. Traffic was terrible and finally, after sitting in it without moving an inch for about 15 minutes, the driver turned off the vehicle and got out and started smoking while walking down the street. This was better, I suppose, than all the other drivers that had gotten out of the driver's seat and pulled out their bottles of vodka like it was suddenly New Years. The traffic in Moscow is the worst I've ever seen anywhere. The drivers aren't quite as crazy as they are in Cairo but the traffic is much worse. Eventually we all got out and walked the last mile and a half to the metro. Then the metro broke down (or something) so we sat underground in the dark for a while until it eventually slowly coasted into my stop. When we finally got out of the metro I was so relieved to finally be out of the hands of Moscow public transport that I didn't even care anymore that I still had to walk the last 2 miles in the rain. And I got a cheese roll on the way (which wasn't very good).

I ate a piece of what seemed to be a smoked fish from the country last night and could not get the horrible smell off my fingers for the rest of the evening. I should have taken a picture of it; you all would have died if you had seen it. I can't wait to find out what new and exciting diseases I picked up from that thing. Maybe it will cure my foot disease.

It's really hard to explain what it's like to live in Russia (or Ukraine). Strange stuff happens constantly, especially when I'm out on the street exploring by myself. I really love it--life is always exciting and unexpected; which can be a fun way to live from time to time.

I hope everyone is doing well! 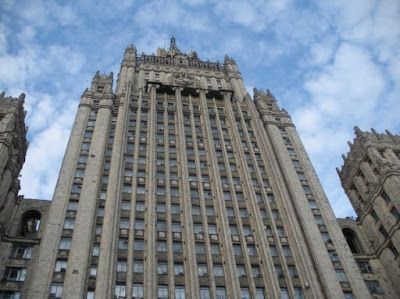 My first weekend in Moscow was warm and sunny. Unfortunately it's been pretty cold and rainy ever since. But it hasn't snowed so I'm thankful. There have been some empty

Hi everyone Hope you are all doing well. I've had a fun and exciting few days. My boss has been in Prague the last few days so it's been pretty quiet at the office especially since Friday around noon when I finished the stuff