Hope you are all doing well.

I've had a fun and exciting few days. My boss has been in Prague the last few days so it's been pretty quiet at the office especially since Friday around noon when I finished the stuff he left for me to do.  I made a couple of new friends who work down the hall in the area presidency office (one girl from Orem that is doing an internship here and another girl from Russia who works full time for the area presidency). So Friday night we hung out and went to "Angels and Demons" in Russian.  And it's a good thing I had read the book because I never would have known what the heck was going on otherwise---I'm finding out that my Russian sucks even more than I thought it did.  Sometimes I seem to do ok and I'll come out of a conversation with someone feeling pretty good about myself and then the next minute somebody will ask me something simple and I have no clue what they're saying.  But I'm getting by and my Russian is getting a little better.

After the movie (it was past midnight) I was a little stressed about how I was going to get home because the nearest metro stop is 5 miles or so from where I live and the busses that go from that metro to my hood stop at about 10:00.  I'm also not yet very familiar with the area so I wasn't sure how to figure it all out.  I ended up walking it, pepper spray firmly grasped in my right hand the whole way.  It took forever but I remarkably found my way and felt pretty safe the whole time.  Since the sun sets so late here it doesn't really ever feel as late as it is. People are still out at 11:00 when it's just gotten dark like it's 5:00 in the afternoon.

Yesterday I went exploring for a while.  Found some cool churches.  Ate something from every questionable street vendor in Moscow, including one regretful cheese roll I bought from a guy named Vlad.  Between noon and 3:30 I ate:

Each of those items came from a different place.

Last night I went to a long institute activity and got another intense dose of Russian for a few hours.  Then I went out with a group of institute people for the night.  Ate some borsht again. Not as good as mine.  Tried to go to a museum because it was free museum night in Moscow.  The line stretched all the way to Siberia so we gave up.  Found a couple of street performers doing some good covers of U2 songs.  Hung out there for a while. Danced with some old drunk shirtless Russian guys. Moscow is amazing at night---Red Square was closed because they had Eurovision here but we were able to see it from a short distance.  At night St. Basil's looks like a fairy-tale land castle.

Made it home again late last night but I found a guy from Tajikistan named Olgy to drive me the 5 miles for four bucks---well worth it. And he didn't try to kidnap me or anything.  But he did yell some number at me (146) and then gave me a toothless smile and a thumbs up as I exited his vehicle. Still not sure what the number was supposed to be but I gave him a thumbs up back and said "absolutely!"

I think I'm going to go to St. Petersburg 2 weekends from now with a couple of friends.  Loving Russia!

Another fun few days in Mother Russia. Sunday afternoon my friend and I went out to a gigantic park (the biggest one I've ever seen in a city) and walked around through some amazing orchards near the banks of the Moscow River.  Eventually we 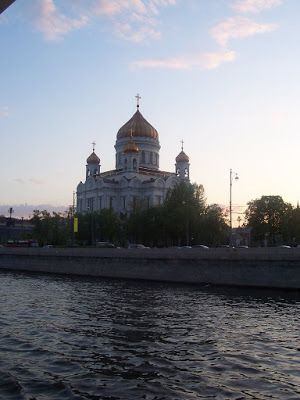 It's been a few days and you should all know that I'm never coming home from Moscow. I LOVE it here. I will miss you all but you are welcome