When I take the bus to SLC on Tuesday and Thursday mornings, it's always a mad rush of drama and fatigue. The bus leaves at about 6:30AM so I have to be up and then out the door pretty early. Because I like a close call, I'm usually out the door about 2 minutes later than I should be (I think this part of me is a manifestation of rebellion, resulting from the number of times Bob made us 6 hours early to everything we ever attended growing up. Although in my ever growing maturity and acceptance of adulthood, I'm starting to see the wisdom in the 6 hours early rule for anything I need to attend in Provo that requires me to find a parking place). Then the race begins. By the time I hop onto the road where I park and catch the bus stop, I can usually see the bus in my rear view. Then starts my first of a series of judgment calls about whether or not I'm going to have enough time to park and then run to the stop or whether I should drive on to the next stop after I've gained a little more distance on the bus. Of course during this whole process I like to imagine that I'm Jack Bauer in 24 and there are terrorists aboard the bus (which, let's be honest, there might be). Last Tuesday was an ordinary morning up through the bus chase scene, until I actually got onto the bus.

Whenever I climb aboard I do a quick cursory glance to decide who I'm going to sit by. To back up a bit, when I get on the bus in the mornings, there are always enough empty seats that I could go and sit on a completely empty row. The express bus that I take has seating like a tour bus so it's relatively comfortable but if you are sitting right next to someone, there isn't a lot of breathing room, so it's always nice to get a whole row to yourself. But what I have found (and for reasons I'll never be able to explain, it took me about four months to figure this out), by the time the bus makes its last stop in Provo, the thing is entirely full and nobody has a row to themselves at all. Recently I decided that it was best to sit right next to someone from the very beginning because at least then I could take control of the bus-mate decision-making process and not get stuck next to talkative crazy stinky guy who is the size of seven people, falls asleep on top of whomever he is sitting by, drools, and then gets all kinds of cranky when you ask him to move so you can get off at your stop. Unfortunately I always feel a little strange when I do sit next to someone despite the abundance of empty rows and I'm never quite sure whether I should turn to them and explain the situation and let them know that what I'm doing is for both of our benefit (because I am not stinky, talkative, cranky, drooling, or the size of seven people) or just let them wonder whether I'm in love with them.

So on Tuesday I did my cursory glance, looking for someone who was small, clean, and quiet so I wouldn't have to touch, smell, or talk to anyone on the dark bus at 6:30 in the morning. I saw a girl toward the front that fit the bill and I plopped down next to her and decided against explaining the process. And so we rode. We rode for almost an hour and half right next to one another. Because the seats are so small and close together with no arm-rest between them, we rode arm against arm the entire way and didn't say a word to one another or look at one another.

Finally we approached my stop and I reached down to gather my things and noticed her security badge with her name. For an hour and a half I had been sitting next to my cousin and neither of us ever noticed. And this wasn't one of those cousins that I see at family reunions and wonder whether they are actually related or just crashing the place for the food (which would be a mistake--most family reunions I've been to do not have great food and the vast majority of the pot-luck items are questionable at best, toxic at worst). In fact, this is one of my very favorite cousins. I turned to her and tapped her arm. She looked at me and said in a tone that meant she was truly disappointed in herself, "what? Are you serious?" We said a quick hello and I jumped off the bus.

On Thursday she saved me a seat. I'm happy to have a bus friend now who is consistently small and clean. I've lost the talkative battle but I'm ok with that. 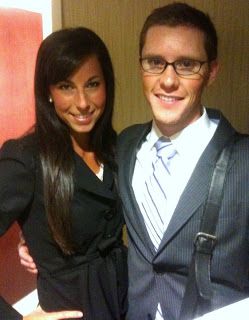 The highly anticipated New York trip came and went. This was for the moot court ABA national competition. At BYU, four oralists and two brief writers qualify for the BYU 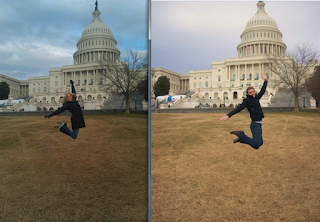 Last week my Law School travel group went to Washington DC for our trial advocacy competition. As expected, it was full of laughs and strange. Wednesday: We left on Wednesday