This morning I received the following text from my mother:

"Dear Eli, [Cathie always addresses me in her texts by name in case I'm not sure who she's speaking to] I read the comments some people have said about you online and I don't think you should be concerned because these people look weird. And your family loves you."

This was followed by an equally bothersome, "I won't be reading them anymore! Icky!"

Cathie has earned her "Tellin' It Like It Is" award many times over, which is one of the qualities we love most about her.

Wondering exactly what monstrosities about her precious boy she could have possibly encountered electronically, I ventured onto the www to discover what I feared might exist:
online forums of dozens of people dissecting every word of my previous four blog posts, and beyond. I immediately became both proud and disturbed that something that I did made groups of people who don't know me or each other engage in a philosophical debate about text messages regarding Snuggies, the Queen of Colors, and wood blocks. One person was very concerned about a rocket shaped object in the background of one of my pictures. One claimed to have dated my wife freshman year, to which another responded, "that's weird, since he's single and never been married" (is it that obvious?). And several have publicly declared that they want to have my babies for reasons that are still a mystery to me--but I'm in no position to ignore any options at this point (see the "Contact Us" tab for further stalking options).

Some of my favorite criticisms have included:

1)  One person making fun of a typo in a blog post from two years ago (this caused me to give up my dream of being a writer).

2)  A contention that my stories are "farcical" (this caused me to give up my dream of being a dancer).

3)  And an observation by someone named "Cowardly Chicken" on the last post: "Wow. You a huge jerk. I am sure everyone who read this thinks you are so cute an clever, but actually you are just mean." (I assume Cowardly Chicken is referring to my Queen of Colors references).

But I zoomed my focus in on two main points of criticism. First, that I am a "self indulgent jerk," as one lovingly put it, who is sure that a world full of Janes would be better than a world full of Elis (I totally agree, by the way. Especially if Jane has a better Pogs collection than I do). And second, that I am a blatant hack because I did not create joke texting and subsequently blogging about it (also totally agree). I now hereby address these assertions:

Eli is a Jerk:

The extent to which I'm a jerk, I contend, is not as great as claimed by some of my new online friends who have not taken all of the facts into account. I provide you with the following list of evidence demonstrating my kindness, which should be weighed against my snarkiness in making any overall value judgments:


1)  I have received text messages from approximately 70 people this month. I only harassed one of them (2 if you count my snarky response to Cathie this morning, "you googled me mom?! What did you find!? I was young! I needed the money!").  That is a 1.43% harassment rate, which is almost 4% lower than my "smile at a stranger in public" rate (I admit that this figure is a bit inflated as I count smirks and sneezes as smiles).

2)  I actually do love Snuggies with all of my heart and did my best to help Beth experience them.  This is something I did not have to do.

3)  My 8 year old niece spent the weekend with me and I took her on a self-guided 2 hour historical tour of the State Capitol Building.  I trudged onward even when she began begging me to let us leave after reading 3 dozen tiny print plaques explaining our heritage for 35 minutes. This will one day change her life. Hopefully it will come in handy when she's working there on the far north end of State Street and will not be a waste of brain space when she's working 30 blocks south of that spot in a place with no windows.

4)  I always cry when I see commercials on t.v. about animal abuse (although I admittedly take no further action).

5)  Recently while walking to work a man threw up onto the sidewalk within four feet of me. I cheerfully exclaimed, "So you've seen the new episode of Glee too, huh?!" This good intentioned merry pronouncement was not well received. And I've lost my taste for corn.

Eli is a hack:

This criticism comes mostly from an argument that contends I stole my ideas from David Thorne, writer of 27bslash6.com, an undeniably hysterical blog full of many humorous posts, including several email exchanges between Thorne and unsuspecting targets. I am neither as funny, nor as cruel, as David Thorne.  And admittedly, I did not invent pranks, humor, the Internet, or blogging about pranks, humor, or the Internet.Because my sense of accomplishment has been completely destroyed by this truthful exploitation, I would like to attempt to restore my credibility by providing for you an exhaustive list of things I have created:

1)  A blue-green ceramic hand print for my mom in the first grade (although to be fair, I did have help).

2)  eligetstobeamommy.blogspot.com, a fine use of a Saturday hour.

4) Somewhere around 1,300 hand drawn mazes between the years 1993 and 1997, three of which were possible to complete. This activity was intended to fill a loneliness void after the Queen of Color'sColors's Colorseses's death, an activity which has since been replaced by creating fake mom blogs.

5)  Gourmet Mac and Cheese for 400 people earlier this year, which I begrudgingly stirred with my arm as there was no spoon long enough to reach the bottom of a 50 gallon bucket. (This, by the way, could also go in the "Eli is a Jerk" defense list above, both because I prepared the meal for these people and because I confessed the arm-stirring right before everyone started eating it.  Even more points if you consider also that I didn't judge anyone for eating it despite this confession.  I did however judge them for eating Mac and Cheese generally).

For balance, I should also mention something I did not create:

1)  The Queen of Colors story. That one is tragically true, at least inasmuch as the chicken was caught in someone's hair. See my oldest sister on a good day for details.

2011 was good to me. It was also my strangest year to date, which is how I measure success. I believe that if I'm living my life the way I should, the best year of my life will always be the last one that 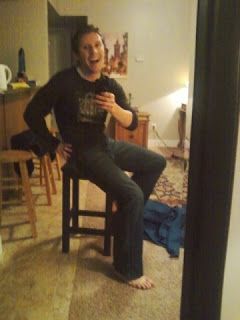 The response to last week's Snuggie Texts post [http://itjustgetsstranger.blogspot.com/2011/12/snuggie-texts.html] has been very entertaining and unexpected, getting near 100,000 views in the last