At the beginning of January, one of our strangers, Catherine, emailed me a link to an ad online of a guy I'll call "Jake" seeking an exhibitionist roommate who might be interested in hanging out with him naked at home. The ad quite meticulously described the exact candidate Jake was looking for. Needing something to keep me entertained during what is most definitely the most horrible period of the year (winter), I reached out to Jake. Below is our entire email correspondence:

Saw your ad and I’m looking forward to moving in with you soon!!! How many pets do you allow? And which kinds are you for or against? I'm flexible and could bring many or none at all, so it's your call.

GEORGE ! u need to call me already! Please ASAP!!! thx jake XXX-XXX-XXXX Tonight works just eves or late. This is going to be so perfect!!! I can tell!

Part of why I wanted to email before coming down the mountain to talk with you eye-to-eye is because I wanted to know your take on a few things before I'll know whether this can work:

First, as I asked in my previous correspondence, how many pets do you allow there? I have a dozen chinchillas that I don't keep caged (for moral reasons). I would like to bring them but if you won't allow them I will probably feed them to my neighbors who have been eying them for a while (they are proto-vegetarian, which means they don't eat meat unless it comes from an animal not commonly consumed by the human race--it's all part of bringing balance to the homo-sapien dominated food chain--which I fully support). What I can't do without are my cats, however. At any given time I have between 4 and 6 (but never more than 10--and that's only if they procreate faster than I can dispose of them, which hasn't happened since the mid-90's--a truly dark time in my life).

Second, are you comfortable with hosting food storage group meetings with the neighbors? I like to do them weekly, usually inviting all of the neighbors to wear togas or something else they find fun but non-offensive (just to keep the party lively). I promise never to invite more than 30 people, and the meetings rarely last more than 4 or 5 hours.

Finally, what are the neighbors like? Are they the type that won't whine and moan if I happen to go through their garbage (that they've ALREADY put out on the street and obviously are intending to get rid of--"garbage" that is full of perfectly useful boxes and empty shampoo bottles. Seriously, some people freak out about the DUMBEST things)?

I think you must be older? I can’t tell much about you based on email. I’m allergic to cats. You have 12 dogs? I think you’d need a kennel licence. and last guy ripped me off so not looking for traffic. It seems like 30 people is a lot of people to have for a meeting. Don’t want anyone to come to the house if I can avoid it. Don’t want you to bring pets at all esp not that many. if u want a room to rent where u can hang out naked call me thanks.

Great! My cats aren't the kind that you would be allergic to. Each of them has a number of handicaps (very sad) but I can proudly say that as of December the 12th, NONE of them carry any diseases that can be transferred from cat to human. Unfortunately I can't say the same for cat to chinchilla, but that's my problem. By the way, I don't have any dogs--chinchillas are a small rodent. I bet you thought I was CRAZY when talking about feeding them to my neighbors, all while assuming they were dogs! I bet you were thinking, "where is this guy from?! North Dakota!!!??!?!?!!!"

I'm sorry to hear that someone ripped you off! I can't imagine that happening to you! You seem like such a nice and innocent guy! I got ripped off at age 10 when Davy Brown bet me my entire pogs collection that I couldn't cross-stitch an full phrase onto a pillow faster than him ("Every time a leaf falls, an angel is hugging the Earth"). Little did I know that he was the current NATIONAL speed cross-stitching champion (Ages 6 to 10). Unfortunately the success went to his head and he later got heavily into crocheting, and everybody knows there's no money in that. Crocheting never has, and never will be a spectator sport. Mark my words. Period. By the time he realized this, his fingers were too big to be successful at cross-stitching. Last I heard he's a wandering trespass fugitive in Yellowstone (with my pogs, no doubt).

You haven't yet commented on the neighbors. That's the last bit of information I need. If you could answer that, we can work from there.

not sure how serious to take u. I told you i don’t want you to bring any pets. i don’t care if they are not dogs. rodents are even worse. why would you have rats? i dont want you to bring those here. NO PETS!!! why you keep asking about pets? I said no pets! NO PETS!!! I am allergic. I told you that! I don’t want to know about your friend from 10 years old! Why would you tell me that? That was waste of time! do you think I have time to read about your friend? why dont you take your pets to his house! why do you have so many animals and they arnent even good pets!
i dont really know the neighbors, its a  condo. i use the back door. hardly ever see them. keeping a low profile here. do you want to live here or not?

My phlebotomy instructor used to say the same thing ("not sure how serious to take you") because far too often I made "I used a nail instead of a needle!" jokes. Then one day it really happened and I couldn't get him to help me. Most embarrassing job termination of. my. life., not to mention the legal fallout. Ever since then I've stayed pretty serious.

Good to know the situation about the neighbors. I like to move into new challenges and it sounds like a really good opportunity to get the ball rolling on some friendly neighborhood barbecues, sweater parties, and (not to be too optimistic) neighborhood watch! Never underestimate a good neighborhood watch. In my last place Mrs. Belendro caught someone digging through the other neighbors' garbages late at night, called the police, exposed the situation, etc. The neighborhood really banded together to do something about it and demanded both an apology and a move-out date. It was a pain to have to leave on such short notice but I've had a lot of faith in the NW system ever since and have tried incorporating it into every new neighborhood so all can be on the lookout for local-celebrity sightings or other fun happenings in the area. Now if I move in, I will do everything I can to help you come out of that shell of yours! No more sneaking through the back door for you mister!!! You'll be a regular Zack Morris from Saved By the Bell by April (I'm referring to his popularity and charm, NOT to his cell-phone).

One more question, can you provide any information about the wildlife and vegetation in the neighborhood? I don't want to sound too picky (and risk a non-response from you) but I have a hard time with Macbridia Albas (let them go extinct, am I right?!). I have issues with a few others but I'm relatively flexible.

I don’t want the neighbors to come over. i don’t want to see any of them. Why do you keep talking about them? why do you want them in your life? I don’t want them to know i live here. don’t talk to my neighbors please! dont invite them to come to my house! i assume you don’t still plan to bring pets because you didnt say anything. I don’t know what that is you mentioned but we don’t have any of those here.

Good. I don't trust phlebotomists farther than I can throw them (which isn't very far). And I’m trying to be respectful, so I will only bring some pets and will let you veto up to five--I think we both would agree that I’m being very fair to you. Also, would you mind ranking the following on a scale from one to ten?:

1. Cleanliness of chicken coops in the area (I had a bad experience with a chicken and someone's hair and ever since I've been wary of dirty chicken coops. You know how that old saying goes: "the less kept the coop, the lower the chicken will stoop").

2. Quality of the neighborhood parades down our street.

6. Library and other public drinking fountains.

Sorry to be so long-winded, but I tend to be very very careful before choosing a new roommate. The last person I lived with was incredibly weird and I don't want to get stuck in a situation like that again. I'll tell you about that whole fiasco sometime. Needless to say I will not be renting from someone again who is so demanding about paying rent EVERY month. I got the last laugh though. When he was in a coma, I was supposed to move out but I squatted for an extra three weeks, didn't pay a dime, and used up all of the condiments in the fridge (even the ones I didn't like).

nope. This is over. i dont have time to help you with your problems. i told you no pets. not even 5. i dont know about the things you asked. we would not be friends. im renting a room not playing games

It's time to make "The Worst Things Ever" list for 2012, so we can all focus our hate on what really matters throughout this year. I have my list below, in no particular order. Please suggest in the comments anything you would like to 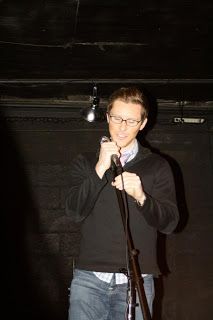 I mentioned a couple of weeks ago that I was going to be telling a story on The Porch. The event happened and was incredibly fun. The Porch is a