Bob and Cathie are growing ever more concerned as the days go on and the May 5th doomsday approaches (Ironman). Typically beacons of hope and encouragement, they took on a new role when they discovered that I committed to attempt to swim in a lake with 2,000 of my closest friends in a save-yourself battle-to-the-death competition. Suddenly having vivid flashbacks of swimming lessons in 1994 when I never quite mastered the "don't sink" technique (I don't remember its official name), they both began, and have continued to, point out as often as possible how terrified they are about my lack of abilities.

In recent weeks Cathie has been heard to say such things as, "How will the boats spot you when you start drowning?" "Your father and I are trying to stay on God's good side right now to improve your chances of survival" and my personal favorite, "Have you made a list of account numbers and other information we'll need if something happens to you in that lake?"

Bob usually just shakes his head whenever the subject is mentioned. I recognize this fervently-confused head-shaking because it's the same reaction I get whenever I accidentally share too much information about risks I take while traveling, like sleeping in the homes of strangers I met the day before online or climbing into unmarked vehicles after getting stranded in the middle of a large city at 3:00 in the morning hoping for a ride home (I should not be free or alive).

But Bob and Cathie are not alone in their fears. Uncle Will recently suggested that I may end up being the Ironman lake ghost after drowning on May 5th, and for years people will swear they can hear underwater screams throughout the month of May. For the record, Uncle Will recently saw that horrid movie, Harry Potter 8 The Woman in Black and seems to relate most of life to it now. But also my now-married EX-roommate Matt gave me a body bag for Christmas. To be fair, he never explained what it was for, exactly. But I assumed it's because he thinks I'm going to die during the swimming portion of the Ironman, and not because he thinks I have plans to kill anyone and hide their body.

I did get a wet suit recently so I'm feeling a lot more "athletic" lately. When I got it, I walked right up to wet suit man at the store and forcefully said, "I need the thickest, warmest, floatiest, wet suit you have and I need it now." He showed me one that was about as thick as a person but then started the following conversation:

So I got the thickest, warmest, floatiest, wetsuit they had, which I have since named "Larry," and attempted to swim with him in the indoor pool at my disgusting currently-pink-eye-infected gym that very day. I found that he was, in fact, warm and floaty as promised. As for speed and mobility, I didn't really notice a difference, which I'm sure is indicative of problems that I don't have time to resolve in less than three months.

The only problem with Larry the wet suit is that he looks like a headless man when hanging up anywhere. And I never seem to remember where I last put Larry until it's too late.

When he's wet, I hang Larry in the shower, which always makes for a very dramatic scream and backward fall into the wall for several seconds of that shocked I'm-living-a-nightmare feeling until I realize that the headless horseman is not actually standing ready to slaughter me in the bathtub. Often I have the same problem when he's hanging in the closet. And I made the very unfortunate mistake of hanging him on my bedroom door one night, causing me to wake up all of Salt Lake City every hour, on the hour, when I repeatedly glanced over at him and screamed bloody-murder throughout the night, certain that the owner of a grave I stepped on in the fourth grade, right before being told by bad-meaning cousin that I would one day pay, had finally come to collect (still waiting).

On a side note, much of my night terrors have to do with a creature invented by my Uncle Lee when I was a kid called "Scallywag" who, as well as I remember, was basically a furry long snake-like creature with heads on both ends. There was even a hand puppet, to better bring the horrific creature to life. It is for this reason, among many others, that I did NOT see Snakes on a Plane. 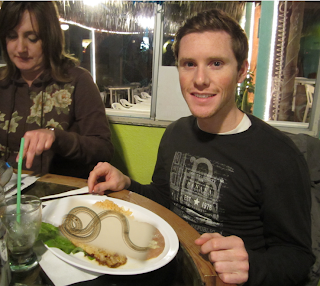 Hell froze over. Long-time readers may remember my phone-purchase debacle of 2009 [http://itjustgetsstranger.blogspot.com/2009/02/1930-called-wants-its-phone-back.html] when I finally upgraded from my flip-phone to one that

It's time to make "The Worst Things Ever" list for 2012, so we can all focus our hate on what really matters throughout this year. I have my list below, in no particular order. Please suggest in the comments anything you would like to