My good, and hysterical, friend Mal (who you can find here) recently had her tonsils removed. I know what you're thinking: "didn't they stop doing that in like 1987? Also Eli, you are the coolest person I've ever heard of!"

First of all, thank you, and you too. But secondly, I understand that they apparently are still removing tonsils, but only once they get diseased enough that they actually start speaking on their own. This can be very convenient if you're the lonely type, but gets really complicated when trying to speak into a voice recognition machine through your phone.

So Mal had tonsils that had gotten to toxic level 5 and the doctor told her that he needed to dig out her throat with a buck knife or she would never be able to talk again.


For many reasons I have always considered a less-threatening and successful surgery to be the absolute most wonderful thing that can happen to a person. Why? Because it combines a justified and legal use of all of my favorite things:

In hopes of taking advantage of numbers 2, 3, and 4 on that list, I trekked over to Mal's place on Friday night. I mean, it's ok to lounge around and do nothing if you're doing it to keep a friend company who has to lounge around and do nothing. Right? And no, I did NOT attempt to take advantage of numbers 1 and 5 on the list. But, like, Mal, if you really need me to come back and test anything, for you of course, I am reluctantly willing to help out. I could be there in like 10 minutes. Call me. Or not. Whatever. I don't care.

Back in my day, the only thing anyone knew about tonsillectomies is that for never-explained-reasons, they allowed children to eat as much ice cream as is humanly possible. I opted against ice cream that night, for the first time in my life.

I pulled up to a gas station to get some Slurpees, because who doesn't love a good Slurpee? And then I saw a Redbox. I was recently taught how to use one of these and I was excited by the idea of using one alone. I thought it would make me feel independent. I wandered over to it and started thumbing through the movies available. And then I saw it.

Strangers, I feel like I am going to lose whatever credibility I had left when it comes to taste in things when you find out what movie I chose. Especially since the last time I communicated at you I quoted a Miley Syrus song.

They had a movie there called "Joyful Noise." Maybe you've heard of it. I swear to you I am not joking when I say that it stars Queen Latifah and Dolly Parton. Those are the people that are in this movie. Together. They are the stars of it. And this was the movie I chose out of the many available. Me. A 28 year old man.

Why did I choose such a film?

While I was flying to LA for the Palau interview, the screen in front of me on the plane played the 4-minute preview of this movie on repeat for 4 straight hours. And no, I could not change this. Something was broken and there was no way to alter what was on the screen.

The first 75 times I saw the preview I had an instinct that I should have trusted: this looks on par with Glee in terms of horrific entertainment creations. And you all know I don't throw around Glee lightly.

But then on the next 212 views of the preview something happened. I became curious.

For all my Mormon friends, this is exactly what they were talking about in seminary all those years about avoiding testing the waters of sin. Because at first you're all like, "what?! That stuff is stupid! Let me get a better look!" and then 25 minutes later BAM!!! You're pregnant.

Well that's what happened with me and Joyful Noise. I mean, I didn't get pregnant. But you understand. It's a metaphor.

So off I walked with my two Slurpees, prepared, in case asked, to tell anyone in the parking lot that I had chosen Saw XXI, while faking an intimidating twitch.

I showed up to Mal's house and cautiously explained my movie choice through hoarse-voice whispered mockery.

As far as I understood it, here's the plot of the movie:

Dolly Parton is a cartoon and Queen Latifah has attitude. They hate each other. Their kids hook up. There's a church choir. Minister thinks they should be more religious. Someone is in the army because he hates his family. Nobody respects their parents. The two ugliest people in town hook up and one dies so the other starts looking for a new ugly person. Someone has a disability and someone else solves his problems by teaching him to play the piano. Queen Latifah and Dolly Parton are in a war to see who can dish out the most obnoxious one-liners. There are 200 music competitions. The town is bankrupt. Dolly Parton gets in a fight with the minister. Someone who plays the guitar gets beat up because he's hitting on Queen Latifah's daughter. Everything works out in the end.

Yes. That was all one movie. And it was terrible. 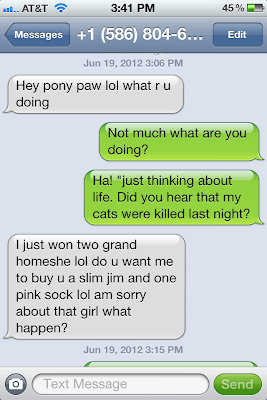 My sister Krisanda received a strange text from an unknown number over the weekend. Never one to pass up on a good opportunity to weird others out, she responded. Below

Several months ago, sort of on a whim, I applied for a job in a country called Palau. Palau is an island nation in Micronesia, 500 trillion miles away from where I currently live. Why did I apply to work there? 1. It never