Moving is truly the worst thing ever. I'm revising my list.

I know. Moving is listed as worse than Glee. I'm sure that will change again once the new season starts. But for now, moving is seriously the worst thing ever.

And it feels especially horrible right now because, guess what, I'm moving to another country. One that I have never been to before. One that I probably still can't point out on a map because I've been too lazy to look it up. (I crossed out that last part because I'm too embarrassed for you to see it).

So here's the thing. I have to be out of my apartment by the end of next week. But I'm not going to Palau until the end of next month. That's a one month forced head-start on the move to the other side of the planet. Also, let's hear it for homelessness!

I am SO going to cramp Bob and Cathie's style when all their friends come over to play Canasta.


In an effort to finally start the massive move, last night we got a number of boxes out and started filling them with stuff to ship to Palau. Daniel is joining me on the move to Palau so he can be the nanny of my children, play irresponsibly, work on his music, work with the country's Ministry of Health for a few months before he runs off and starts law school somewhere next fall. Oh to be young again.

So we decided it was time to start shipping our belongings south. Or east. West? Or, whatever direction Palau is from where I am right now.

Problem is, as it turns out, it is really difficult to figure out what, of everything I own, is worthy of shipping. Like, do I send my collection of slap bracelets, or can I go a year without them? How many togas will I need? And don't even get me started on the "which Snuggies" question.

In all the stress, we resorted to pulling out drawers, turning them upside-down, and emptying them into old boxes. Once the box seemed full enough, we sealed it with excessive amounts of tape and moved on to the next box.

This happened for a while until I, in my panic, went to the kitchen and made banana bread for 2 hours. "I can't focus on another thing until we get rid of these old bananas!"

Today we ventured off to check out a few storage unit options in the area for the stuff that didn't happen to be in any of the drawers we dumped. We found a place that seemed to meet our needs, even though it looked a lot like something I saw in Tuscan once called the "No-Tell Motel." And in fact, I'm 140% positive we accidentally stumbled upon a prostitution ring in the process. (Not that I know what that is, mom).

As Mr. Pimp-daddy was showing us the units, we passed what I can only describe as what looked exactly like a "crack-whore" who meandered through the "secure" units with her pit-bull, evidently not storing or un-storing stuff. When we commented on this woman's dog, Mr. Pimp-daddy got extremely nervous for the remainder of our visit. He was actually shaking and he spoke about five times faster and ten times more than he had prior to our run-in with lady of the night. We saw a number of other suspicious characters and pieces of prostitution-consistent-evidence that prompted me to feel the unrelenting weight of my civic duties.

This led me to then wonder: who on earth am I supposed to tell this kind of stuff to?

In the fourth grade it was easy. Always just tell teacher and let him/her figure it out. Because Becky Hansen was a little too trigger happy with this one in Kindergarten, I was led out of the classroom by an angry Mrs. G. pinching the top of my ear almost every single day. This was back in the '80s when it was ok to publicly beat children.

But I don't remember anyone ever clarifying, in my adulthood, who to contact when you accidentally stumble into a multi-hundred . . . cent . . . prostitution ring just down the street.

911 is absolutely not an option for me anymore. I no longer have any credibility with those people. In fact, I am absolutely positive that if I call them one more time, they will start screening my calls.

I have probably called 911 fifty times this summer. Forty of those times were accidental. My phone has a VERY unhelpful feature that causes it to call for an emergency response team if stroked the right way.

Because Bob and Cathie very deeply ingrained within me at a very young age that calling 911 in any situation that did not culminate in the loss of life or limb is the greatest sin, each of these accidental calls has been traumatic for my psyche.

What typically happens is this: I hear from my pocket, "911, what's your emergency!?" I ALWAYS hang up immediately rather than just pick up the phone and tell them that the call was unintentional. If I had enough time to think, I would do this differently. But as it is, each time I just hang up and hope that they won't know who called and will go about their business. And guys, it's SO embarrassing when they find out it's me.

Because they ALWAYS call right back.

And then we have this conversation:

"OH MY GOSH I'M SO SORRY I DIDN'T MEAN TO CALL YOU!!! Please don't be mad!!! My phone does this thing where it always calls--"

"Sir, are you telling me there isn't an emergency?"

"Well, no. Unless you consider how embarrassed I am that I accidentally called you an emergency!" (sideways winky-smiley face, but through the phone).

And the times I've meant to call always turn out not to be "emergencies" according to 911. I'm sorry that I'm the only one who thinks snake sightings should be reported!

So I knew I couldn't call 911 about the prostitution ring. Instead I phoned-a-friend who works for the FBI.

Ruining my reputation, one government agency at a time.

Which leads me to my final point: do you know what's more stressful than moving? Moving while also fighting prostitution.

I'm basically like Batman. Except one who got a job in Palau. 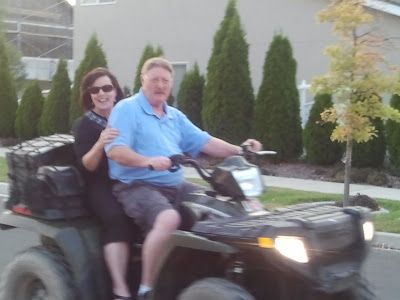 This weekend I bring you more pictures from my phone. It's fun for me to glance through these and look at the captured bits of life I run into, mostly 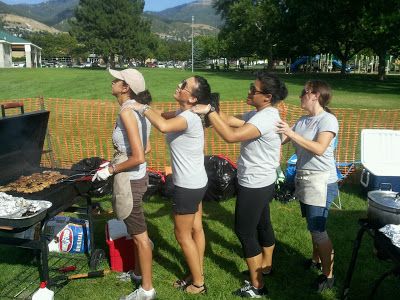 Summerfest happened. And I served food. And got a lot of it on me. I lived the dream. The festival went on for exactly 12 million hours. And we were