One year ago today I posted Snuggie Texts.

I cannot believe it has already been a year. You people are getting old.

Over the past year, many of you have asked a lot of questions about that experience. How it happened. Who Jane is. What happened to her after Snuggie Texts. Etc.

I have answered so few of your questions and, frankly, never thought I would answer them. This was partly because of laziness but also, I was worried that if I talked too much about it, it might ruin the humor for some of you. Some friends who knew more about the story than I shared here were sure this wouldn't happen and encouraged me to appease the strangers of the world by discussing the experience a little more.

And what better way to do that than on the anniversary of Snuggie Texts? So, here it is.


It was one year ago yesterday that I got that first text from Jane, whose real name is not actually Jane, by the way. Sorry for lying to you. I'll never do it again.

I was having Sunday dinner with Bob and Cathie and my oldest sister Krishelle when I got the text. She wanted to go halfsies on a wedding gift. I quickly responded with a suggestion for Snuggies thinking that would be the end of our conversation. But she replied, and implied that my Snuggie suggestion was just a joke. So I replied again. And again and again and again.

I really believed that each text I sent would be the last one. Particularly because each text I sent quickly became more and more outrageous. And finally, I sent Jane a picture of myself in a Snuggie, but with my face covered by a Venetian mask that belonged to my roommate at the time.

And she still responded to me like I was this person she initially meant to text.

It was at this point that I started developing in my mind the most likely scenario that could have allowed for this to happen. A scenario that I still stick to today.

Jane is obviously a very nice person. Even after she realized I was messing with her, she still never became unprofessional in any way. I also think that Jane seems like an intelligent person. Her texts were well-worded, spelled correctly, and, frankly, grown-up sounding. No they weren't a literary masterpiece, but they were as coherent as any text messages ever are.

I began to believe that what must have happened was this: Jane was at a wedding shower for her very good friend Beth. At said shower, she met Amanda who is also a very good friend of Beth. Perhaps even related. Amanda may be socially awkward. And because Jane is such an inviting and warm person, Amanda immediately latched onto her. Even going so far as to suggest that they buy a wedding gift together.

Jane got Amanda's number. Which just so fortunately happened to be similar to mine.

When "Amanda" responded that she didn't understand why Jane would be making fun of her Snuggie idea, Jane suddenly worried that she may have offended this person, whom she didn't know well. From that point on Jane was cautious and avoided saying anything that could offend Amanda any further, who obviously was now showing herself to be a very odd person.

When Jane got that first picture text, I imagined her showing it to her friends and asking how on Earth she should respond. They probably assumed this couldn't be serious. But at this point, Jane either still wanted to be cautious, or she just wanted see where else the texting conversation could go. And that's how Snuggie Texts came to be.

I quickly typed up the text exchange and posted it here before going for a run with a friend one Monday evening. Already, within just a couple of hours, the response was incredible. And the blog started getting shared all over Facebook. Very few people had ever read Stranger prior to that day. Just some friends and family, mostly. But suddenly that week, tens of thousands were reading and sharing and commenting on it.

Naturally Jane saw the exchange. It was sort of bound to happen. She had a local number, meaning she probably lived near me, and so many young people had been sharing the post on Facebook that week that many of us wondered whether Jane would eventually see it. It took 6 days. The following Saturday morning after Snuggie Texts I got another text from Jane while at a family Christmas party. "So I've seen your blog." And with her help, another fun text exchange resulted.

I spoke to Jane on the phone on a couple of occasions in the weeks that immediately followed. One of those phone calls was upon the urging of KSL who wanted to contact her for an interview. That phone conversation went like this:

Jane: Just sitting here enjoying all of my wood blocks that you think are ridiculous.

Eli: About that. KSL contacted me--

Eli: You haven't even heard my pitch yet!

I told Jane that KSL wanted to do an article. She laughed and made some comment about the state of the news these days and then told me that, for reasons she asked me not to share, she really wasn't interested in talking to anyone about it. But she encouraged me to do the interview and told me she was happy everyone was having so much fun with it all.

I have still not met Jane in person. I know almost nothing about her. But I can say, she seems to be a perfectly nice and wonderful person. And I'll always be thankful to her for ultimately being such a good sport about a joke that has brought us all together.

Snuggie Texts continued to spread. My good friend Jolyn Metro, whom I had met only a month prior to this, served as a major source of comfort during the craziness. And no, I am not referring to hanky panky of any sort. My hygiene habits are way too disgusting for someone as clean as Jolyn.

Jolyn contacted her best friend Jen Lee, who lived in Canada, and asked for her emergency design help because Stranger at that time looked like what Jolyn described as "the Wal-Mart of blogs." Jen quickly took over and designed the goat/bush image at the top of the blog and did a host of other maintenance that made things seem a lot more classy around here. Jen Lee is an incredibly talented person.

Jolyn and Jen also created the Facebook page (which is getting close to 10,000 likes, by the way!) for the blog and helped spread the word in other ways.

Jolyn started occasionally sending emails to the Stranger email account from different aliases, begging me for VERY strange favors. I would usually forward these emails to Jen and Jolyn and ask for advice about how to respond. Jolyn would then give me advice.

Advice on how to respond to the emails she was sending me. I would then have back and forth communication with various imaginary people, carefully trying to deny their requests without hurting their feelings. It wasn't until just a couple of months ago that Jolyn finally came clean about this.

So there. Sometimes I'm the victim, too. Jolyn is at the very top of the food chain in all of this madness. The rest of us live on borrowed time.

Jolyn, Jen, and I, began jokingly referring to ourselves as "the Stranger staff." I will always be so grateful to Jolyn and Jen and will feel a close connection to them for the rest of my life.

And here we are, one year later.

I would be lying if I said that writing here hasn't changed for me since Snuggie Texts. And I just told you I would never lie to you again, so obviously I won't say that. See how I'm already regaining your trust?

Stranger went from 100 visits a month (thanks Bob & Cathie!) to hundreds of thousands each week. I have had the chance to do public story-telling and stand-up in front of a crowd of "fans" (having fans is still so strange to me that on the very rare occasion that I use that word, I still have to use finger quotes). Publishers have emailed me about my thoughts on writing a book. And one dear friend who owns a t-shirt printing business started printing shirts for the blog (which you can totally buy if you want a great Christmas present. But like, no pressure or anything. Like, don't buy it if you don't love people. And I won't care either way. Although, I told you earlier this week that I am stalking you. So I know what you're doing at all times. Just saying).

Now when I write here, I know that tens of thousands, and potentially even millions, are going to read what I'm writing. And talk about it. And critique it. And maybe even share it, if it tickles their fancy.

Sorry for saying "tickles their fancy." I regretted it the moment I started typing the words. I wish there was some way I could delete it.

The thought of my life and ideas having that much exposure is exciting and scary and intimidating and surreal. And, well, strange.

Sort of ironic how the blog that I created to keep a record of my strange experiences itself has sort of become the strangest experience of all. Unless you count the time a man peed onto my leg in a bus.

Thanks for the great year, strangers.

[For the full Queen of Colors story, click here.] 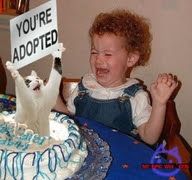 I mentioned yesterday in the Snuggie Texts anniversary post that Jolyn, my friend who helps me with the blog, has frequently targeted me in some terribly mean pranks. Me. Innocent, 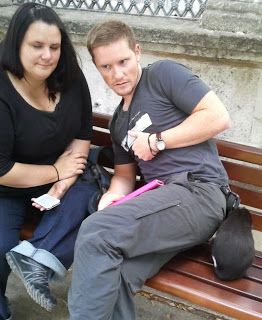 One stranger, Lauren, suggested that I email a relationship expert and seek some advice. I found one young guy with a blog in which he states that he is an