Daniel and I have assignments with the local Mormon church group to teach lessons and plan activities for the teenagers on the island. This means that every Wednesday night we are frantically organizing something. We started feeling guilty for constantly doing activities that teach absolutely no life skills whatsoever so we've been trying to be more thoughtful lately.

I do not want to be responsible if these kids don't know how to play Angry Birds because we never taught them anything useful.

He brought the dummies that he uses to teach his First Aid class at the college and walked everyone through the steps. The kids mostly just sat in quiet shock because those dummies were the MOST horrific looking things any of us had ever seen. They looked like they came straight from a Hannibal Lecter movie. Plus the baby dummy's face kept falling off.

When the demonstration concluded, one little girl walked up to me, pointed at my arm, and said, "what's all that stuff on your skin."

Guys. I have freckles. The BANE of my 28 year existence. I hate them with every fiber of my being. I have searched my entire life for one redeeming quality about them. I have not found any.

Growing up I was told that each one represented an angel kiss. I almost gave up my faith in everything over this. They don't tell you those kinds of things about good stuff. Like, you never hear people say, "Sally, the reason you have perfectly straight teeth is because little fairies hold them that way." Because Sally doesn't need an explanation for why her teeth are straight. They're just straight. And that's awesome for Sally. I bet she has good hair and a rockin' bod, too. But people need comforting explanations for why crappy things have happened to their bodies.

When I was a kid, I used to wear long-sleeved shirts to school to try to hide my freckles. I tried rubbing dirt all over my face when I was 8, thinking it would look like a tan and cover them up. I also used to think that people wouldn't want to be my friend because I had them. It made law school really hard.

I kid. Eventually I grew out of the insecurity and I stopped feeling bad about myself for having them, fortunately. I also started to realize that in the grand scheme of things, they weren't really that important and that whether I thought they were a nuisance or not, they couldn't stop me from accomplishing things in life that I could be proud of. But I never quite grew out of disliking them; and it's ok to dislike some things that you can't really change. Glee, for example.

And the reasons I have always disliked them are many. They look funny. They never really go away. The more fun you have, the more you get. People make jokes about them. The Farkus kid had them in A Christmas Story. People call you a ginger no matter what your hair color is. But worst of all, they give you skin cancer. I basically get a sunburn by walking through a well-lit room.

Ok. I know they don't give you skin cancer. I'm aware that they aren't the cause. I've heard of science. You don't need to contradict me right now. Nobody thinks you're smart.

Ok, that was a little rude. I'm sure plenty of people think you're smart. You see what freckles do to me? You see how irritable I just got? ANOTHER TERRIBLE THING ABOUT FRECKLES.

I don't even like the word "freckles." In fact, I pretty much never say it. And I have found that the best way to deal with my problem is through denial. I mostly like to pretend that I don't have any at all and I really believe that if I pull this off confidently enough, people around me will start believing this as well. And if nobody thinks I have them, maybe they'll go away. This is just like that whole tree in a forest and nobody is there to hear it fall thing.

I have one good friend who is plagued with the same disease as me. She and I are both frustrated that the world has refused thus far to view freckles as a problem. Not enough people are willing to admit how terrible they are. And until the world accepts that they are a problem, nobody is going to seriously look for a cure.

But this puts us in a very difficult position. Because we could start advocating for people to accept that freckles are terrible. But then if we succeed and nobody finds a cure, we will have to live with something that we already hated and that now the rest of the world sees as terrible as well.

You see what I have to deal with?

I thought about lying and saying that I spilled something all over my skin that I was going to wash away later, but instead I responded to the little girl, "these dots? These are freckles."

She looked down at her beautiful flawless brown Palauan skin, and then back at mine and said, "are you going to be ok?"

I nodded and assured here, "with time."

Daniel overheard this conversation and came rushing over to defend freckles everywhere. Because Daniel thinks that my views on freckles are wholly nonsensical.

"Of COURSE he's going to be ok! There's nothing wrong with freckles!!! Look! I have some too!" He said. Pointing to all 7 of his freckles.

He thinks he's helping. But it's like telling somebody who lost all four of their limbs that you understand because your fingernail fell off recently.

I explained to the kid, "Daniel is being kind. He is trying to assure you that I don't have a problem because he thinks it will make me feel better."

Daniel immediately interjected, "no no. You have plenty of problems. I'm just telling you that having freckles isn't one of them."

It's nice to have people like Daniel in the world who are willing to contradict the "it matters what's on the outside" lessons I teach to children. And I just want to say, if you have freckles, and you don't like them, you've got a friend in me. And I don't care what anybody thinks---we're hot. On the inside and the outside.

But mostly on the inside. 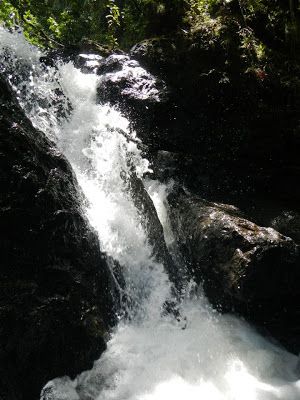 Occasionally I catch my 9-year-old niece on Facebook chat and on a good day, I'm able to get her to chat with me for a few minutes. Unfortunately she usually

Last week my good friend Deb invited me and Daniel to something called a "first birth ceremony." I had only ever heard a few things about this, and immediately the moment that I did hear about it I knew that I was not to