I play the piano. I know what you're thinking. "Oh my gosh Eli! You're like a triple threat! You play the piano, you can walk on the backs of your toes, AND your hair has been looking really good lately!" And you are all writing me an email to invite me to perform at your kid's birthday party. Which I will accept because I have a hard time saying no to things. Especially when cake is involved. And I'm assuming you would let me take home some of the cake because who invites a performer to a party and doesn't let them take some of the cake home?

And thanks for the compliment about my hair, by the way. I'm trying a new thing today and I wasn't sure if I was pulling it off.

I made my musical debut at church in Palau about 2 months ago when someone asked me to please accompany a little girl who was going to be singing during one of our meetings. It was a song I had never heard of before and we met a few minutes before church started to run through it together. After going over it once I asked if she needed to practice again. She responded with attitude -- and I mean islander attitude, which cuts you to the core but also makes you really like the person and want to do everything they say for the rest of your life -- "does it SOUND like I need to practice again?"

When the time of our performance arrived, my lack of practice in recent months caught up to me and my playing was somewhere between painful and disaster. The occasional sharp look from the child during the course of the number only added to the mounting pressure. And she stormed back into the congregation and flipped her hands in the air the moment she was done singing, even though I wasn't quite done playing. I swear she gave the congregation a look like, "I'll never work with him again!"

Never again. I thought as well.

Then this Sunday came. The teenagers at church were asked to sing a song together, and out of necessity, I had to accompany them.

In what can only be called an extremely irresponsible decision, I failed to practice until late the night before. And that's when I found out that it was too late. Because I needed at least 3 weeks of consistent practice to make this sound un-embarrassing.

Ten minutes before church started the next morning, I gathered the teenagers in another room and we practiced our little hearts out. I told them that I was going to have the boys sing one part of the song alone and have the girls take another before the whole group joined together.

Then the time of reckoning came.

Guys. THE BIGGEST DISASTER OF MY LIFE. Besides the Ironman. And besides the time I peed my pants in the first grade and tried to convince everyone that I did the splits at recess on wet grass and then they asked me to prove that I could do the splits and so I tried, thinking that sheer will-power would get me to do it, even though I had never done the splits before.

And besides the time I tied the strings on my shorts to a desk of a class we were visiting in the third grade and then the teacher dismissed us and I was stuck and I had to sit there for 10 minutes while she tried to untie me with her long fingernails and the girl whose desk I was sitting in stood there crying while the rest of the third graders watched and when I got back to my class everyone was already there and my teacher asked me where I had been and I had to announce to everyone that I had tied myself to a desk in another room.

At least it got them to forget about the pee splits incident from first grade.

Actually, now that I think about it, this piano thing wasn't even close to being the biggest disaster of my life. Probably not even top ten. But guys, it was bad.

Fortunately the kids sounded pretty good and followed all of the instructions. This was in part due to Daniel's help, as he offered to step in and sing with the boys, even though he is a foot taller than the rest of the kids and looked like Gandalf singing with the hobbits.

For our next performance, I think we're going to do a Wizard of Oz themed number and have Daniel play Glenda, the good witch.

When we finished, one person told me how brave our decision was to have the boys sing part of the song alone and how great that turned out. I was very proud of this achievement, and partly to take the attention off of my piano disaster, in which large portions of the song had to be sung a cappella because I lost my place, I decided to share this compliment with the boys.

Eli: Guys, you won't believe it! Someone just told me that the best part of the song was when you sang alone. And they commented that it was a very daring decision. This is JUST like on the runway when a fashion designer makes a really bold choice on color and then pulls it off!

Eli: You know. Or, like, on the red carpet when someone wears a dress that is really different and they say that it was such a brave move but then it ends up being fabulous.

[Palauan boys who have never seen or had any interest in anything I'm talking about continue to stare blankly, like I'm the biggest idiot they've ever encountered]

Daniel: This isn't working Eli. Try something else.

Daniel: Guys, he means it's like when you're playing basketball and you decide to take a three-point-shot instead of passing it to the inside, and then you make the basket.

Eli: Oh what business do you have drawing an analogy to sports!?

Daniel: I can talk about basketball because I'm tall!

I seriously need to be replaced.

Good morning, strangers. We're back today with another edition of Yahoo! Answers. People were not very helpful with my questions below. Sigh. Also, Yahoo! Answers deleted almost all of these 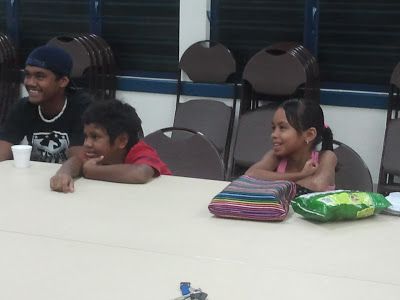 Daniel drove me into work this morning. This was the entirety of our conversation: Daniel: Are you cranky again this morning? Eli: I'M NOT CRANKY!!! I'M NEVER CRANKY IN THE