So about that whole marriage case at the Supreme Court. I'm typically pretty silent on Stranger about controversial current happenings. I think this is because I never wanted Stranger to be a forum for those kinds of things. Because for heaven's sake friends. We should have SOMEWHERE to go on the Internets where people aren't screaming at each other about these issues because they're too busy talking about their fear of chickens and cats and snakes and accidentally getting naked in places where they were supposed to be fully clothed (last time I'll ever go to THAT pharmacy!).

And I'm not about to change course on that. So don't worry. No long ranting post today about the arguments and the Supreme Court and all the people caught in between. But I'm a lawyer. And a Mormon. And an American. And I've been working for appellate courts and offices that practice appellate litigation for the past three years. So naturally I'm interested in the process and the discussion and my place in it all, or my perceived place in it all.

I've read amicus briefs for each side that were filed with the Supreme Court. The vast majority of the arguments made by both sides, as far as legal matters are concerned, I thought were utter nonsense. But I don't blame the lawyers for trying.

And ultimately, I have many thoughts on the issues of equality, and the judiciary's role in these things, and federalism, and the practical implications of different decisions being handed down by unelected judges, and why that's ok, and why that sometimes doesn't feel ok. And honestly, those thoughts are in a constant state of evolution in my mind. And I'm totally fine with that. Because what's the point of life if we aren't willing to learn something new?

Note: The answer to that question is "cheesecake." Twice up the barrel, once down the side.

But in all of this, I do want to say, let's all please try to remember that sweet and sincere people stand on every side of this debate. And yes, there are WAY more than two sides in this debate.

There are some jerks scattered about, too. But everyone can benefit from a little kindness. Especially the jerks. 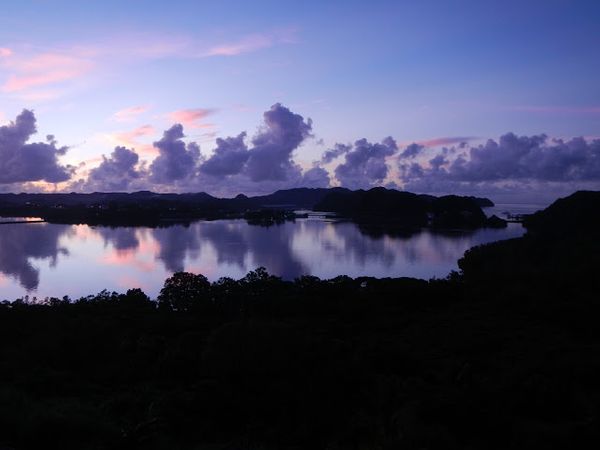 Tonight we had a little party on the beach. Daniel has been doing an internship with the Attorney General of Palau, an American woman who has taken Daniel under her

Right before lunch today I got the mass text that "fresh" produce had graced the land of Palau. 12 seconds later I was walking down the street toward the grocery store at a brisk pace when the Stormtrooper zoomed by with Daniel at the