A few items of business today. First as I mentioned a week or two ago, I will be coming to the U.S. soon. I would like to formally warn all of the malls and everyone who sells burritos to be prepared for me. Because I'm not going to go easy on them. It's about to get real, malls and Mexican restaurants of America. I will visit all of you. And then I'm going to use the hell out of my parents' dishwasher.

Second, I have decided to go with Steph's suggestion (and a few others) of naming my visit the "Twice Up the Barrel Tour" and I think we'll refer to the portion in which I'm going to DC the "Eli Goes to Washington" segment of the Twice Up the Barrel Tour. Thank you Jennifer for the Washington suggestion. And thank you everyone for helping out with this very important decision.

Third, during the Twice Up the Barrel Tour, I will be performing at (on?) The Porch. The Porch was kind enough to invite me back for their April 18 show in Provo Utah. Last year I had a great time telling stories at two of The Porch's shows and those people have been so kind and inviting to our Stranger community. I hope some of you can make it to the April 18 show. I would love to meet or reconnect with you all. I haven't decided which story I'll tell yet but I have some ideas. And I promise, none of them involve my cat hoarding problem. I will keep you all posted on the specifics and will let you know when tickets are available on The Porch's site.

A Very Enlightening Conversation with Daniel this Weekend


Eli: I posted a picture on Stranger of us in a two-person kayak on Friday. Someone commented and said that we have a "bro-mance."

Daniel: Ha. If only they knew what was really going on in that picture.

Daniel: I was contemplating a friend divorce from you.

Daniel: Two-person kayaking is the best way to make people hate each other. At the exact moment that that picture was being taken, I was thinking about filing for a friendship divorce and just moving on.

Daniel: No. If I'm not going to be your friend anymore, I want it documented in writing so it's clear that I don't have any more obligations with you.

Eli: Obligations?! I require nothing from you!

Daniel: [in a mocking whiny voice that is supposed to represent me but that in no way actually represents my real voice] Make me breakfast every day! Pay attention to me! Give me a compliment! Tell me I'm funny! Play a game with me! Listen to all of my problems! Do my laundry!

Eli: Well . . . those are just regular friendship responsibilities. Ones that I shouldn't HAVE to ask you to perform, by the way.

Daniel: Anyway, at one point I was paddling in that stupid kayak and you were just sitting there singing Miley Cyrus's Party in the USA at the top of your lungs on an eternal loop, not helping paddle, and I just thought, "Daniel, is this really all worth it?!"

Eli: I'm sorry that my arms got tired so I couldn't help anymore and so instead I entertained everyone by singing.

Daniel: How could your arms have gotten tired? You didn't use them!

Eli: So did you decide not to go through with the friend divorce when you realized how big of a pain it would be to separate all our stuff?

Daniel: Yeah. That and because I would have to move out and I don't think I could get alimony. Then what would I do? Plus I don't want to have a custody battle for the Stormtrooper.

Eli: Um. You wouldn't. The Stormtrooper belongs to me.

Daniel: I'm sorry. But the Stormtrooper is way too cool to belong to anyone who knows that many words to Party in the USA.

I'm finally ready to talk about it. As you all know from yesterday's post and Friday's pictures, I went kayaking last weekend. It was fun, even though Daniel apparently wanted to get a friend divorce from me because I wasn't "doing anything to help! 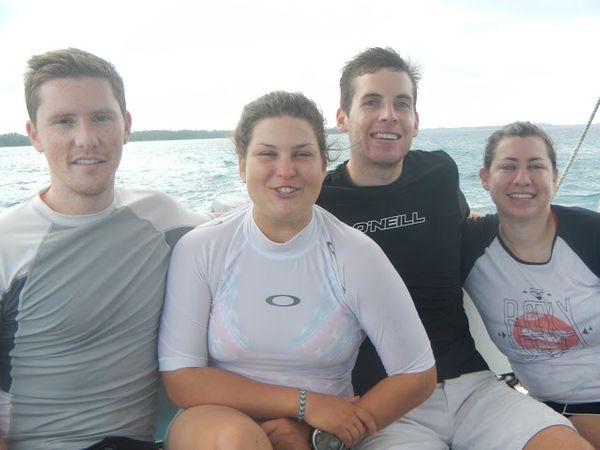 I hope you all had a wonderful week. I had the day off today because it's "Youth Day" in Palau. I'm not sure exactly what I was supposed to be