I'm finally ready to talk about it.

As you all know from yesterday's post and Friday's pictures, I went kayaking last weekend. It was fun, even though Daniel apparently wanted to get a friend divorce from me because I wasn't "doing anything to help!" in the two-person kayak.

We obviously have very different interpretations of the word "help." I, for example, consider the amount of singing I did at the top of my lungs to be of great help to everyone.

Anyway, you guys. Are you sitting down? Do you have a heart condition? Did you take your pills? I need you to be in an ok state before you read this next part. I don't want anyone to die of fear.

Are you ready? Ok. I'm just going to get it out there. It's like ripping off the band aide really fast.

HOLY HELL I SAW A SNAKE WE'RE ALL GONNA DIE!!!!


GUYS! It was the MOST AWFUL, HORRIBLE, TERRIBLE, experience of my ENTIRE young life!!! And I once had to watch the entirety of Ben-Hur with my grandpa in college on a tv with bad reception while rubbing lotion onto my 100 year old great grandma's feet as my grandpa said every line out loud 2 seconds before the actor did! AND it was being played on PBS on one of those fundraiser specials where it breaks every 20 minutes to 20 minutes of showing the people answering the phones to take donations. So it took TWICE as long as usual to get through the whole movie.

There we were, paddling along (and by "we" I mean "Daniel"), minding our own business. We were kayaking really close to one island. Most of the islands in Palau consist of rock walls all the way around the perimeter. They actually look a lot like mushrooms and if you go right up to the wall, the island and mangroves sort of extend over the top of you and create a nice shelter.

A NICE SHELTER FOR SNAKES!

We preferred to kayak close to the islands like this because it felt very jungley and it provided some nice shade. At one point, we sort of just stopped and hung out in one particularly pleasant area.

And that's when it happened.

Suddenly, Daniel turned to the right and said the most alarming six words I have ever heard come out of a human mouth:

I didn't know snakes could climb.

In slow motion, I turned my head slightly to the right, and there it was, hanging from the rock wall, 2 feet away from my face. A black and white striped sea snake. A snake that is so poisonous that it's bite will kill a person in 3 seconds. Don't believe me? Look at this horrible link, which lists the top ten most deadly snakes in the world and lists this particular snake as the most deadly and says that it's so bad that it basically can't even compare to the others.

When I saw it, I swear I heard that sound effect from horror movies where the person sees the monster. You know which one I'm talking about. It's the one that goes DUNNNNNNN!!!!!! and then that camera effect happened where the scary object gets closer but the background zooms out.

And I suddenly turned my entire life's purpose into getting out of that situation. I paddled so hard and fast that Daniel got whiplash from the unexpected jolt. Every second of my life flashed before my eyes and I knew I wasn't the one who poured a carton of milk into Molly Jacob's backpack in Kindergarten!

The entire way out from the island I let out one long 2 minute scream. Somehow I was able to scream even though there was no air left in my lungs from when the sight of the snake knocked the wind out of me.

My friends who were with us stared on like I was a crazed maniac. And they were right.

When we got a safe distance away I started rambling frantically about all the things in life I was sorry for and that's when Daniel said the stupidest thing that has ever been said by another person.

"Ok, now that you're calming down, let's go back to it and get a picture!"

He then started paddling.

And then I, with all the strength left in me, started paddling in reverse, yelling Mormon obscenities at anyone who would listen.

Then I threw my paddle and started to climb out of the kayak.

That's when Daniel finally stopped and asked me if I was serious.

No Daniel. I like staring Hell right in the eyes and letting it suck out my soul.

The rest of the kayak ride was carried out in silence. I'm now considering having the part of my brain that contains memories amputated.

Do you guys have any totally rational fears that other people act like are irrational ones? 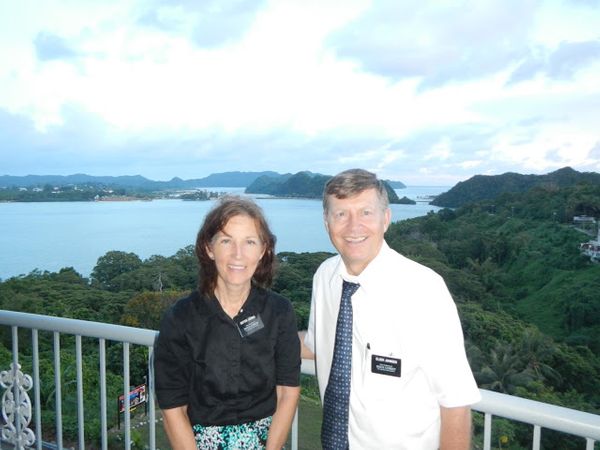 Sister and Elder Johnsen at my apartment for dinner on their last week in Palau. On Monday night two of my closest friends in Palau left the country forever. And

A few items of business today. First as I mentioned a week or two ago, I will be coming to the U.S. soon. I would like to formally warn all of the malls and everyone who sells burritos to be prepared for me.