I live on the top of a very very steep hill. So steep that the Stormtrooper sounds like a nuclear bomb every time I have to drive up into the extremely slanted parking lot. So steep that if there are more than three people in the car, the wheels just spin when we attempt to ascend the hill. So steep that when I park on the hill with the driver's side pointed toward the sky, I have to climb out of the car like it's a submarine.

This morning I was bringing a heavy box of items out to the Stormtrooper as I was leaving for work. On a few occasions, the person who has climbed out of the side of the parked car that faces downhill has accidentally spilled items that we've just purchased from the grocery store. Once something gets dropped in this parking lot, it begins an almost free-fall descent down onto the main road to then be run over by buses.

I was trying to be very careful with this heavy box as I slowly side-stepped toward the Stormtrooper this morning. And that's when it happened.

I lost my grip.


I watched as a dozen or so personal items quickly rolled down the hill away from me. Shoes. Toiletries. A bunch of small water bottles. Half a dozen Snuggies. Etc. Everything clicking and clanking and echoing off of the concrete apartment building. All of it rolling away from me.

I began running down the hill like a mad man, trying to stop anything I could. But I was doing that thing from every cartoon where as soon as I bent down to pick something up, it rolled farther away.

Within a few seconds, everything was funneled through the narrow entrance/exit of the parking lot and was ejected onto the street.

As I went running after my things with a panicked look on my face, a car quickly pulled over and a man and woman jumped out. The woman, seeing my border-line hysterical state, called over to me, "it's ok. We got this."

One more car that was passing by pulled over as well and the people in it hopped out and started collecting items. The next thing I knew, everything was placed into the box and someone was helping me walk it back up the hill to put it into the Stormtrooper.

That's twice this week that strangers have come to the rescue. Those people this morning and the people on Tuesday in the office supply store, who helped me build new boxes to meet the post office requirements, will probably never know how much I appreciate what they were willing to stop and do for me. And I'm so happy that some of my final impressions of Palau are going to be about strangers stepping in to save me when I was too tired and sweaty to think or when my garbage was rolling down a steep hill into the middle of the road.

So with that, I want to ask you: any experiences out there you want to share about a time you helped a stranger or a stranger helped you? 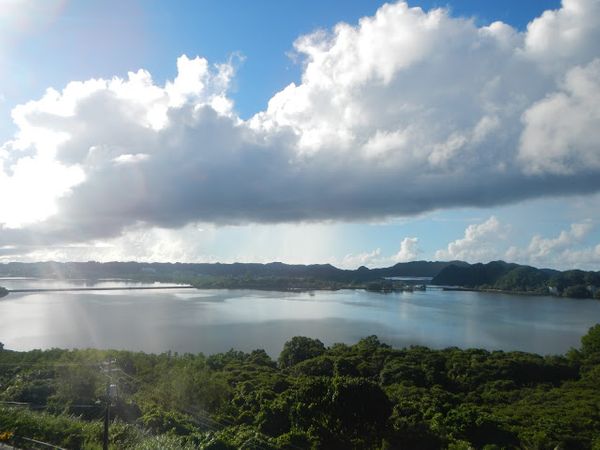 One week remains in the Land of Coconuts. I'm slowly cleaning out my office, throwing away one packing peanut at a time in my apartment, and finding new homes for

Since I'm living alone now I'm having to adjust to the quiet of my apartment. It's strange, and I don't like it much. I want my home to be full of life. I like feeling like I live in Grand Central Station rather than