When we first moved to Palau and Daniel had basically nothing to do all day but spend an absurd amount of time waiting for the paperwork for his employment to be processed, he began aggressively developing new hobbies. And I mean like one to five new hobbies every. single. day.

I would come home from work to find paper mâché or paint supplies or Harry Potter IV in Spanish or musical instruments strewn about the apartment. There was always a new project. Always some new goal that threatened to completely take over both of our lives even though "this is MY thing. It won't affect you unless you let it."

One day I came home and discovered that Daniel had decided to become a gardener. He had purchased several very large planter boxes and had filled them with dirt and seeds. It was a mess.

I generally tried to be supportive of each of the new hobbies because I knew he was having a hard time keeping himself occupied and I certainly didn't want him to freak out one day and up and leave. But I finally put my foot down when he mentioned that he was thinking of getting a pet.

Daniel: But what if--

He promised to take care of it and that I wouldn't have to lift a finger. Finally I told him that if he could prove that he could be responsible with all of his new gardening stuff, I would consider it. This was, of course, an empty promise. No matter what, I would have found a way to believe that he didn't prove that he could be responsible with the gardening stuff. He could have made the cover the of Home & Garden magazine and I still would have been like, "a responsible gardener wouldn't be exploiting his plants for fame like that, Daniel."

But he took my promise to heart, watering them daily, moving them around for optimal sun exposure, and sometimes meowing sweet little nothings to them.

Then eventually--as in one week later--he got busy with something else. And he forgot about the pet idea. And his garden.

The days turned into weeks and the weeks turned into months and before we knew it, there were literally six-foot weeds growing out of the planter boxes right outside the front door. I complained about this from time to time and Daniel tried to convince me that the weeds were actually flourishing tomato plants or apple trees or Everlasting Gobstopper bushes and we would be reaping the rewards in short order.

Then rainy season began. And the planter boxes, which have no drainage system, flooded and held stagnant water in the muggy tropics for several weeks. Last week I noticed that the boxes had begun emitting a rancid smell that extended twenty or so feet. Little bugs and mosquitoes hovered around them, and even the weeds were beginning to die. Daniel had cultivated a swamp.

Eli: THIS IS HOW MALARIA HAPPENS, DANIEL!

Daniel: Yeah. I guess we kind of dropped the ball with the gardening.

Then Daniel left Palau. Strewn about the apartment were the remnants of hobbies forgotten. Paint supplies and guitar music and of course, his malaria garden.

Last night I walked out onto the balcony and saw Leotrix laying dead, halfway into one of the planter boxes. And I thought, "how poetic."

I'm sitting in my office. I should be heading out to eat lunch, but instead I'm sipping a protein drink and writing to you. It's almost impossible to find a meal in Palau that doesn't consist of white rice and breaded deep-fried once-frozen meat. 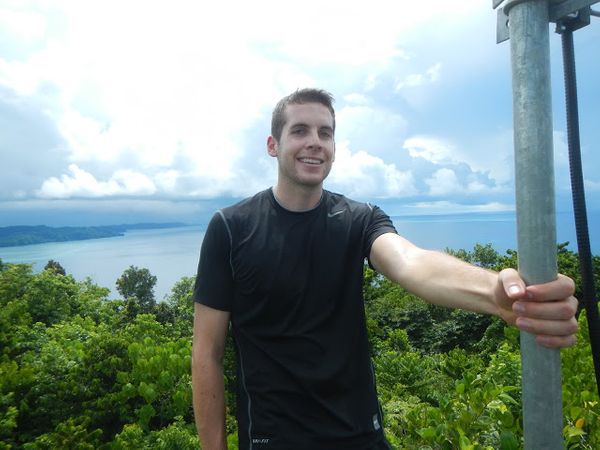 Dear Mr. Daniel, I dropped you off at the airport just a few hours ago. You left a trail of personal belongings through the apartment and in the Stormtrooper. I