It was strange to see Daniel last weekend. For months and months our lives were one. They were totally one. And then, suddenly, they weren't anymore.

Daniel and I spent countless hours training for an Ironman together. We lived together. We backpacked across eastern Europe together. And then we moved to the quiet Pacific together.

For a long time Daniel was my best friend. The best friend anyone could ever imagine having.

Then it changed. Sort of. And sort of a lot.

We left Palau. Our lives took us in opposite directions.

I've written around those events, but never very directly. Daniel encouraged me to mention it now, saying that he believes this is a story that could help some people, since everyone goes through this same thing at one time or another. And after some thought, I've decided that I want to tell you about this because it's a big part of my story. And I want you to know this part of my story.

I won't go into all of the whys and hows. Frankly, I don't think either of us even know all of the whys and hows. But in our final weeks in Palau we had grown apart considerably. We never really talked about it. But we both knew that serious frustration had built up, and we got to a point where both of us resented the decisions and actions of the other, from the benign to the significant.

Palau creates sort of an odd bubble of social experimentation. Living in such a small and isolated place forces a person to rely on those around them to such a greater degree than the person might be used to. And the effects of actions, words, and deeds on other people are all magnified greatly in this petri dish of human emotion.

In that state, I had made some decisions that really really upset Daniel. I didn't know that they upset him at the time and I didn't believe he had any reason to be upset anyway. Many months later, when we finally spoke candidly, I learned how life looked from his perspective and I could see how some of my actions could have been so insensitive and hurtful to him at that time. And I felt absolutely terrible about this. Daniel reports that he experienced something similar on his end after he considered some of his own actions and reactions.

Don't get me wrong. We never hated each other, or even stopped caring about one another's well-being. We had just lost a lot of what we had, and all of this because we were acting in ways that were extremely hurtful to the other without ever discussing it.

I'll never forget the day I took Daniel to the airport when he left Palau. It was the middle of the night, and we drove through the dark jungle, mostly in silence.

I asked him if he wanted me to go into the airport with him. He said "no" and climbed out of the Stormtrooper with his bags.

"Whatever you want," he responded.

I waited in the front area of the tiny airport, sweaty and tired, while Daniel retrieved his ticket from the airline. The airport looked like a large barn. And, like usual, there were only a few people there, sitting and waiting, probably for nothing in particular.

Daniel came out of the ticket area, sweaty and tired, and passed me to head up the stairs to the tiny security area.

With his ticket clenched in his hand, he slowed briefly while passing and said, as though we had just met, "well, this is it. I hope your last few weeks are nice. Maybe I'll see you around." His voice had the pleasant tone his voice always has when he's really frustrated and sad but obviously trying to turn off all of his emotions because relief feels better than grief.

He turned and walked toward the stairs.

I stood there, feeling like the wind had been knocked out of me. And I hated that this was going to be our last memory together in Palau. Palau, where we had shared so much. He was the one person who could really understand everything I had just gone through for what was probably the most difficult year of my life. And he didn't even seem to care about me or, apparently, intend to ever see me again.

I think Daniel hated that, too. All of it. Because he got to the stairs and stopped. I was watching him as he stood, facing away from me for a moment, in silent contemplation. He was holding his bags and standing in flip-flops that had been worn almost all the way through. His clothes looked stretched and tattered from a year of hard living in the muggy equatorial tropics. So did the rest of him.

Flashes of driving in the Stormtrooper through the jungle went through my mind. I saw us talking on the beach, late into the night. I saw us visiting impoverished friends and noticing, together, how this was changing our outlook on life. I saw all of these experiences at once, and felt simultaneously connected and disconnected with the one person who truly knew these experiences that I would be processing for years to come.

He turned around right where he stood and looked at me. There was a profound sadness in his eyes. Frustration. Disappointment. Fatigue. He stared at me from across the tiny airport for just a moment or two. And then he muttered, his voicing sounding like all of the things he looked, "Hey. I love you, ok?"

He muttered words that aren't spoken often enough between friends.

And I noticed then that he said this as a question, and not a statement. Not like he was informing me that he cared about me as a person, but like he wanted me to acknowledge that, whatever might happen in the weeks and months and years to come, I was aware that behind the thin facade of pleasantness, some sincere emotion existed.

And then he walked up the stairs, the slapping of his size 17 flip flops echoing through the quiet airport until he turned the corner and disappeared.

I drove home through the dark jungle, crying.

I was alone for the last several weeks, tying up the loose strings of our shared Palauan life, all by myself. And it was strange. It was empty. The solitude wasn't nearly as disconcerting as the ubiquitous reminders of a happier time that littered every corner of my dying Palauan life.

When I returned to the United States I felt like everything was going to be so different for me. And I suddenly found myself wandering into a new and sort of confusing phase of life, totally without the support and counsel of this person I was so used to being my very best friend.

The months that followed were painful, but important. And I learned a lot as I looked over the mistakes I had made and the lessons I needed to learn along the way.

Before too long, through a series of unexpected circumstances, Daniel and I started to reconnect. And it was nice. But it wasn't what it had been. There was still a hesitation. A wall.

With time that wall began to crumble. It crumbled because we wanted it to, and because we were both willing to sacrifice our own anger enough to dissipate the other's sadness. And because of that, I found myself able to talk to him on the phone and laugh, kind of like we used to.

Seeing Daniel in Mexico last week was sort of the first time we had seen each other since we left Palau. At least, for more than a few unpleasant minutes. And it was wonderful.

I don't know all of the details and intricacies of the point of life, but I suspect that whatever it is, it all has a lot to do with human connection. With relationships. With how much we can learn about the kind of peace with which we are rewarded for paying the price of selflessness to get along. And I bet the majority of people who sense that the end of their life is near spend a great deal of time reflecting, regretting, and rejoicing in their decisions about how they navigated through the complexity of life's relationships.

What makes life strange, probably more than anything else, is that it is totally, unpredictably, affected by the decisions of strangers around us. The ones who wander into our lives unexpectedly and completely alter the course, turning it into something never really imagined before, for better or worse.

And it's beautiful and wonderful that those strangers can bring so much fulfillment. That it takes connection with another person to actually get to know yourself. That wounds can be healed. That pain can stop hurting, although, fortunately, never be forgotten. It's beautiful and wonderful that we experience and turn into something in the process. 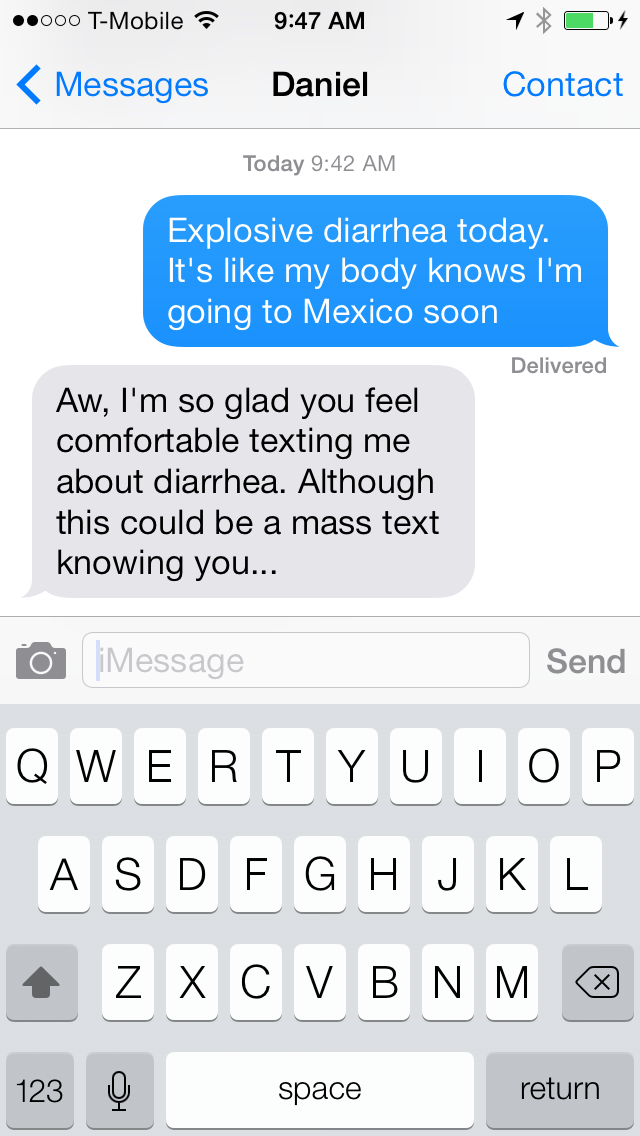 I've been having . . . well . . . issues for the past many weeks. With my body. With the inside of my body. So, naturally, I decided to share this with anyone who would

People are freaking out about the movie Frozen. They are saying that it is a sneaky way to tell children not to hate themselves for being gay. They are angry about this. As though teaching a gay person that finding peace within over something