Today is my sister Krisanda's birthday. She's turning 21 again. All four of Bob and Cathie's children started turning 21 every year sometime around 2010. It's been great to be the same age finally.

Krisanda is my middle sister. She is also the sister who has most consistently lied to me throughout my life. For example, for over a decade she had convinced me that we once had an older sister named Christine who was killed in a car accident on the way home from a beauty pageant and had since haunted the basement singing Whitney Houston songs.

Once she made me perform a series of very uncomfortable poison control remedies because she thought a drop of cleaning solution had landed in my mouth. Although, to be fair, I don't think she was playing a joke on me on that one. I think she legitimately thought I was going to die.


I've always had a very special and unique bond with each of my sisters. And Krisanda is definitely a kindred spirit to me. We both got the severe worrying gene that our other siblings seemed to avoid and I think this has pushed us together throughout our lives.

Krisanda is four years older than me and I remember so well all of the times when 10-year-old version of her read books to 6-year-old version of me. And all of the times as teenagers we would go on bike-rides together. Or the miserable two years of our lives when we mistakenly thought it would be fun to work at a restaurant together. (The together part was nice, but the restaurant part was misery).

Throughout adulthood I haven't had the chance to spend nearly as much time with Krisanda as I would have liked to. She's a busy mom with four wild animals as children. And she's a great mom at that. Sometimes I see her little family and can't help but feel that although she is only four years older than me, she has advanced in life experience about four decades beyond anything I've ever known. And it makes me jealous. And proud of her.

Also, I'm still kind of upset about the Mexican thing.

Last Thursday I got a text from Jolyn. "Eli, could you please accompany me to something tonight?" I know better than to ever accept any invitation from Jolyn without first 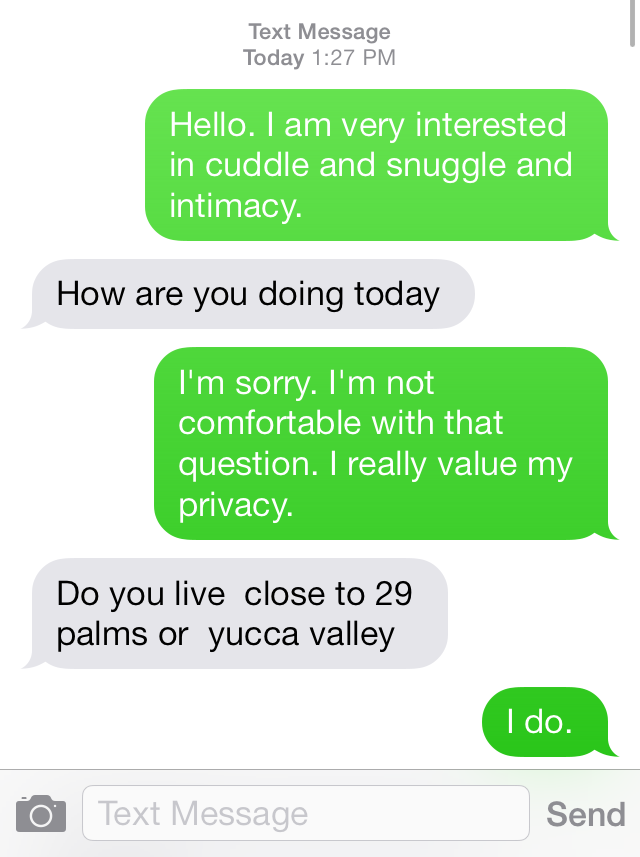 One Stranger, Amy V., emailed me on Friday a link to a Craigslist ad by a man looking for a beautiful woman to "cuddle" and "snuggle" and "intimacy." He required