You guys. Traveling from Krakow Poland to Salt Lake City, Utah, United States of God Bless America, was probably the most arduous journey anyone has ever taken. I'm including even the time the Mormon pioneers crossed the plains and had to eat doilies to stay alive. Did the Mormon pioneers have to take a train and then have THREE layovers before making it to Salt Lake City?

I DIDN'T THINK SO.

We had to fly out of Warsaw, which meant we had to frantically get ourselves, via a four-hour train ride, from Krakow to Warsaw to catch a 6:00 AM flight. Then we flew across the world and stopped in every country along the way. I'm pretty sure we even had a layover in Palau at one point. I could tell because when I got off the plane I immediately started sweating, I gained 30 pounds, and Leotrix attacked me.

But I'm getting way ahead of myself.

As you know, we started our trip in Kyiv and took ourselves on a self-guided tour of the battlegrounds. We were able to talk with a lot of people there and have one of the most incredible experiences I've ever had. I don't know that I'll ever be able to really explain what it was like to be there. But I am certain that this opportunity will change my life forever. I saw freedom, courage, tragedy, oppression, frustration, passion, and fear through a different lens than I have ever known before. I will always be so grateful that I had that opportunity and that we were able to stay safe throughout.

After spending a few days in Kyiv, staying with my good friends Max and Natalia, Brandt and I took an all-night train west, to L'viv, Ukraine.

L'viv is my favorite city on planet Earth. It is as gorgeous as any European city you can find, but without a single tourist. The people are wonderfully pleasant. The food is to die for. And the spoken Ukrainian is beautiful, which makes it extra fun for me to practice the language.

For three days Brandt and I wandered the streets, eating roughly 17 meals a day. We watched incredible street performers on their accordions and guitars and other instruments that I swear they must have created themselves at home. We even performed with some street performers on one piano in the center square.

It was a fulfilled dream for me. I played that piano and actually drew in a small crowd. And when they clapped for me I humbly nodded and was all like, "oh my gosh. Thank you. I didn't see you guys there. I just do it because I love the work." But really inside I was like, "OH MY GOSH ATTENTION!!!"

But beyond being an incredibly famous musician, the best part of being in L'viv was having the chance to talk to people about their lives and what they think about what is happening in their beautiful country right now.

As Brandt and I walked through one art market, we found a little old lady named Olia, who emphatically showed us dozens of table runners and tablecloths she had spent countless hours embroidering. They were beautiful. All of them. And we admired them with her, sincerely, as she spoke quickly and excitedly and told us every detail about every one them, happy for the audience who clearly appreciated her work.

Brandt saw one piece that he thought his mom would really like and he asked to buy it. She happily made the sale. Then she asked me (I was translating the conversation) what he planned to do with it. I told her that he wanted to give it to his mom. She nodded and asked me where his mom lived, so I told her.

She turned and started packing her things away, telling me that she needed to go to the hospital and so had to stop working for the day. As she began cleaning up she mentioned how amazing it was to her that her work was going to be admired all the way in America and how she never thought in her life that such a thing would be possible.

Then she turned to us and tears suddenly welled in her eyes. Her voice broke, in the heartbreaking way, as she said, "boys, my life has been really really hard. You can't even understand how much I needed this interaction today."

And right then, as the tears started dripping down her scrunched up cheeks, I noticed for the first time the deep-seated lines on her face and the old raggedy clothes she was wearing. It seemed ironic to me that she stood among some of the most beautiful, although simple, embroidery I had ever seen while she herself was draped in such weathered clothes.

Then she smiled and said, "this has just lifted my spirits. So thank you."

It's easy for me to get caught up in my own little world, addicted to my phone, and comfortable in my hardly-changing, specially-customized social circle. But every once in a while I have little encounters like this one that remind me that it's not so bad to disconnect from the norm so I can reconnect with the strangers. Because, although your first grade teacher may have told you otherwise, sometimes strangers have the best candy.

And now, enjoy one billions pictures of L'viv: 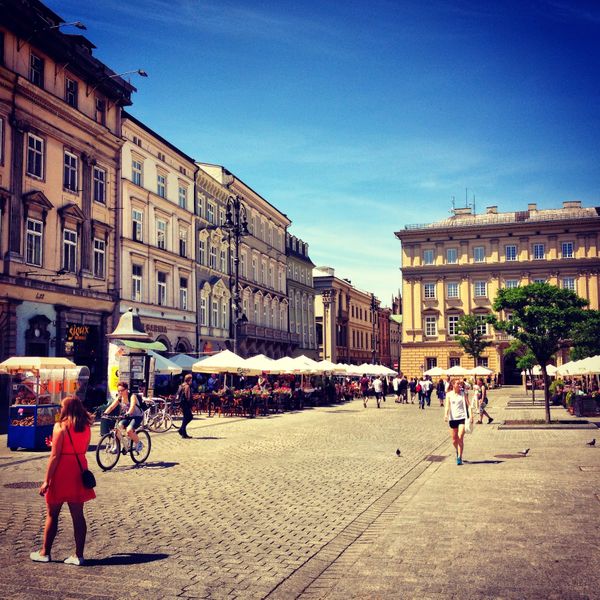 After spending a few wonderful days in L'viv, Brandt and I boarded the midnight train to Krakow, Poland. (A superstar, but he didn't get far). The train was mostly empty, 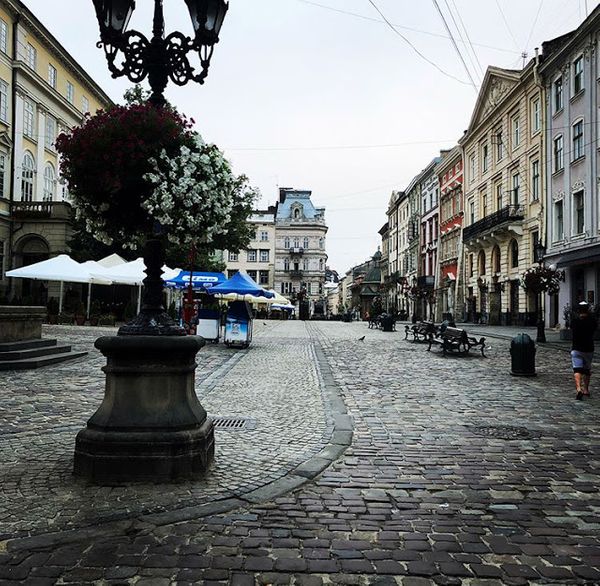 We've escaped the war zone in Ukraine for the less dramatic Poland. Brandt and I rolled in on the midnight train last night. Actually, maybe that's misleading. The train left