Sometime in the last few days:

Friend: Eli. Thank you for finally letting me in to your apartment.

Eli: Thanks for pretending to be Paul Simon so I would.

Friend: I'm here to have an intervention with you.

Eli: Why do I have the feeling you're about to confront me about something?

Friend: Probably because I just said "I'm here to have an intervention with you."

Friend: Your friends are worried about you. We know you're very sad right now but--

Friend: Because of the series of mass texts.

Friend: Let's see. [Pulls out phone]. There's this first one that says, "what's the point in living!? I might as well die!"

Eli: Hmmm. Can you be more specific?

Friend: Then this one that says, "No. The relationship is NOT going well. I got DUMPED!!! Thanks for asking!"

Friend: Then there were ten or so messages of just frowny face emoticons.

Eli: I think I know which messages you're referring to now.

Friend: Then the several crying selfies from the bathtub. With candles.

Eli: Oh yeah. It's hard to take steady selfies when you're crying.

Friend: And what was going on in this one?

Eli: I think I meant to send that to someone else.

Eli: Also, it was so hard to find the right lamp lighting for those pictures.

Friend: Also, it appears that there is no water in the bathtub in these pictures. You're not even taking a bath. You're just sitting in an empty bathtub naked and crying.

Eli: Right. I had already showered and I didn't want to get wet again. Also, baths are gross and depressing.

Friend: You didn't want to get wet again and yet you took the effort to set out and light candles.

Friend: Look. Bath or no bath, I'm here to help you get through this. We don't want to see any more crying bath selfies from you. They make us sad.

Friend: Not really. We're sad that we're friends with someone who thinks it's ok to text crying bath selfies.

Friend: So it's time to stop mourning and start living. First thing we're going to do is take that bucket of ice cream away and turn off the TV.

Eli: HOW DARE YOU!? TV AND ICE CREAM HAVE BEEN LIKE A FATHER TO ME!!!

Friend: That's why we're going to take them away.

Eli: But they're the only things in my life that aren't rejecting me.

Friend: That is not at all true. You are way overreacting. You are handling this whole thing terribly.

Eli: That's not fair. I've actually been quite calm. And I haven't done any of the cliche "just got dumped" things.

Friend: Really? I could hear Taylor Swift playing from outside. Why, Eli? Why Taylor Swift?

Eli: BECAUSE I COULDN'T FIND MY CELINE DION ALBUM, OK?!

Friend: Also, what is that very disturbing thing on the coffee table?

Eli: NOTHING! [Eli quickly crumbles up a collage with various head shots glued over the faces in magazine pictures of families.]

Friend: You can move on from this. Everyone gets dumped.

Eli: So you're saying everything is going to be ok?

Friend: I am. And look. Maybe this break up won't even be permanent. You never know--

Eli: Oh, no. It's for sure permanent.

Friend: How do you know?

Eli: Because after it was over I checked the Internet for "what not to say when you're getting dumped" and I found a list and I said pretty much all of the things on the list when I was getting dumped.

Friend: The Internet has a list of what not to say while getting dumped? So you have to, like, preemptively check that list in case you get dumped in order for it to be valuable?

Eli: Apparently you're not supposed to say stuff like "GO TO HELL YOU STUPID WHORE" etc.

Eli: Also, threatening to burn someone's house down isn't specifically listed, but I think the spirit of the statement was prohibited on said list.

Eli: Other things you shouldn't say: "But I love you LET'S GET MARRIED!" "I hope I don't accidentally tell all of your secrets to everyone now that we're not together anymore." Or, "But I'm pregnant with your child" and then hurry and get pregnant with someone's child.

Eli: They're examples. I'm just giving you examples of things that I read you're not supposed to say while getting dumped.

Friend: Ok. I think it's probably good that you read that list so that you won't do those things next time.

Eli: THERE'S GOING TO BE A NEXT TIME?!

I could use the collective wisdom of the Strangers today. Because I am turning into a crazy person. And I don't want to turn into a crazy person BECAUSE WHAT IF PAUL SIMON?! As I may have embarrassingly announced a few days ago [https: 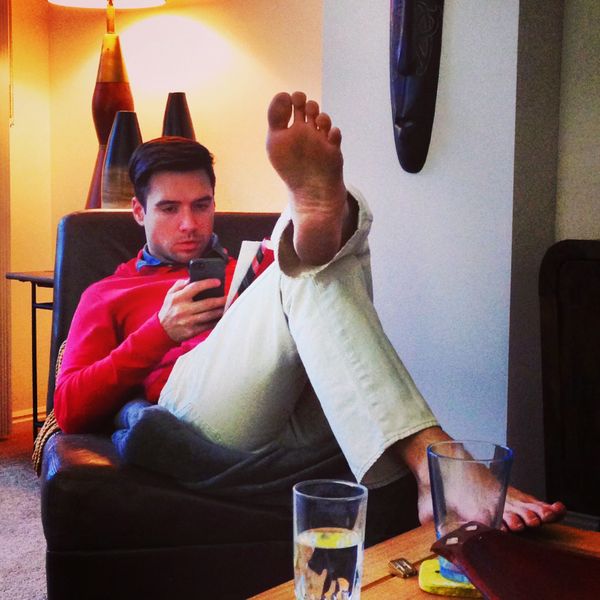 It's been kind of a hard week here in Strangerville. Didn't someone promise once that after you turn 30 everything goes exactly how you plan for the rest of your