You guys. I know you are all very excited and you've hardly been able to sleep lately. You've made paper chains counting down the days. You've spent all of your time in the last few months trying to pick out your outfits for the big day. And the amount of thought you've put into your hair! You've done all of this for good reason.

And you know I don't italicize, underline, bold, and capitalize simultaneously unless it's REALLY important.

For the less fortunate who don't have the opportunity to experience the glory of July 24th Pioneer Day, I'll give you a little background.


Pioneer Day is a Utah state holiday and it celebrates the time in 1847 when the Mormon pioneers entered the Salt Lake Valley through Emigration Canyon just down the street from where I live. And every year Salt Lake City SHUTS THE HELL DOWN to celebrate this. I'm truly not kidding. Half of the streets downtown are closed off to cars. Because there are legitimately COVERED. FREAKING. WAGONS. And HANDCARTS. Wandering around the streets of Salt Lake City.

All of the kids in Utah learn the official state song in school. It's called "UTAH! THIS IS THE PLACE!" And seriously. It is the most triumphant song of all time. The title of it HAS to be in all caps so you can really understand it. It's about how Brigham Young brought the pioneers to Salt Lake. It has like 97 verses and a good portion of it could probably prompt a nice separation-of-church-and-state lawsuit.

But so far, every child in the state of Utah has learned this thing for the last 20 years, including dramatic hand actions. It can be heard on the streets of Salt Lake City throughout Pioneer Day. And if you ever catch me in a good mood (like on July 24th), I will perform it for you IN ITS ENTIRETY.

Until then, please let this video of the song's performance and the excessive use of jazz hands keep you company.

All of the state offices and local companies close on the 24th. Some of my friends who work for national companies have to take vacation time to get out of the office on that day. Usually when they talk about this, they speak of it as though it is the most outrageous and offensive thing that could happen.

"Can you believe that my office isn't closed on PIONEER DAY?! THEY MIGHT AS WELL MAKE US WORK ON CHRISTMAS!!!"

There's a giant parade on the morning of the holiday. People start sitting out on the streets to secure a good spot for this parade 48 hours in advance. I'm not kidding. The parade goes right by my place. I already saw signs being put up on July 19th, asking people to please be courteous in staking out their spots. FOR THE PARADE THAT HAPPENS FIVE DAYS LATER.

And I know some of you are slightly skeptical and are wondering how Pioneer Day could possibly be better than Christmas. Let me just point out, oh ye naysayers, that Santa inexplicably makes an appearance in the Pioneer Day parade EVERY year. Does Christmas have Santa AND handcarts AND doilies? What? Just Santa?

There's also a giant marathon and 10k that run along the pioneer route. Of course I signed up for the marathon. Because THE PIONEERS. Also, since it runs along side the parade route this means that there are thousands of people there to cheer for me and you KNOW I'm not going to pass up the opportunity for that kind of attention!

But mostly I'm doing it because the pioneers. Of course.

I think the thing I love the most about Pioneer Day is that it's this odd little thing that we have all to ourselves in Utah. And in Salt Lake City, everyone loves Pioneer Day. It doesn't matter if you have pioneer ancestors or if you've never heard of the Mormons in your life. Pioneer Day is a celebration of the fact that this city we all love exists.

And for some people, that celebration comes in the form of drinking beer under the grand firework displays that light up the evening sky ("Pionbeer Day"). For others, it's pulling handcarts and imagining the sacrifices the pioneers selflessly made to settle our city and tame the desert into the beautiful place it is now. And for some, it's drinking beer while cheering on the handcart pullers. But for everyone, it's about being really super happy that we get to live here in this incredible little place.

And I'm excited. Because, damn it. I love Salt Lake City. And the freaking pioneers. 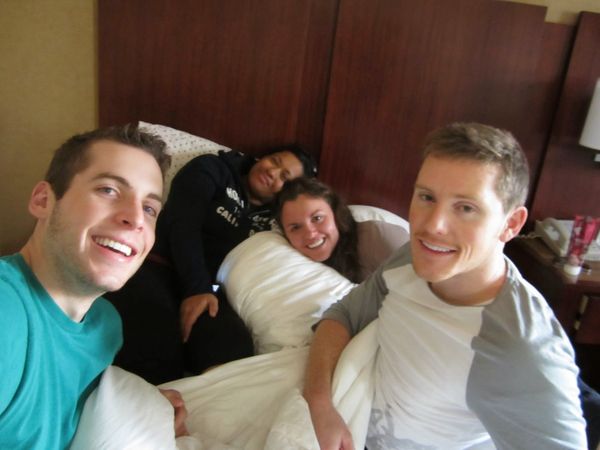 Occasionally I glance back through older posts on Stranger. Usually I keep this walk through memory lane to the Palau posts, because I find them fascinating now that I've been