First, in response to your general concern about Friday's post, in which I told you that apparently someone trained in the ways of medicine thinks I'm dying, I want to give you a slight update and a little more info.

I'll be going in this week for my first of two heart tests (the other one will be next week). Some of you have very kindly expressed your concern about my continuing to train for the Ironman, which is now less than three weeks away. #WHATTHEHELL! #howisthispossible #Squeenofcolors #whatarehashtags?

The doctor told me to continue to train like normal but to stop immediately if I felt funny at all during anything that I do. Unless the tests over the next two weeks tell me that I shouldn't, I'll move forward with the race.


In my heart of enlarged hearts, I believe that I'm fine. I think the fainting spells of last week were a result of overreacting to an excessive amount of stress and anxiety I've been going through lately. So I've been attempting in the last few days to CALM THE HELL DOWN!!!!

Every time I start to feel any stress, I begin screaming at everyone around me, "I CAN'T DEAL WITH THIS RIGHT NOW! I NEED TO RELAX! GET AWAY FROM ME!"

So far it's not really working. But I'm going to try REALLY REALLY hard and put tons of effort and energy into MAKING it work, and I'm giving myself a lot of expectations and really difficult goals and consequences for failing to meet those goals. Etc.

Because I NEED TO RELAX!!!

So on Friday, I decided that it would be best to bring Paul Cyclemon with me to the office so we could go on a nice calm ride up the canyon nearby during the middle of the day. Around 11:00 we ventured north.

Most things I do in the office feel a little awkward. But I'll just tell you now that that awkwardness is magnified tenfold when I complete the same tasks in bike shorts.

We made it into the canyon and rode a ways before, suddenly, Paul Cyclemon got a flat tire.

This has been happening more often than usual lately and it's really starting to freak me out because OH MY GOSH WHAT IF THIS HAPPENS DURING THE RACE IN LESS THAN THREE WEEKS.

But I told myself not to freak out. I need to stay CALM right now.

I sat down on the side of the road and changed the tube. And within three minutes, the new tire deflated.

I was out of supplies to change the tube again. I didn't know what happened. And I was trying not to freak out.

Because this was Salt Lake City, which, after having seen many places, I am totally convinced has the nicest people in the entire world, every single person who came by me by bike or foot stopped to ask me whether I needed help. One man gave me all of the supplies to change my tube again, and then rode on.

I changed the tube and began riding. A few minutes later, the tire went flat again. Another man stopped and tried to help me. But when we changed the tube again, it almost immediately went flat. Clearly there was something wrong with Paul Cyclemon. And I declined help from the next dozen or so people who asked because I figured there was really no point in trying change the tube again.

Unfortunately I was in a canyon that is closed off to cars, and I was a good three miles from the mouth of the canyon. I called my friend Jess, an attorney at my firm, and asked her to come pick me up. But in order to get to her car, I had to jog barefoot (jogging in bike shoes isn't really reasonable) the entire three miles.

By the time I reached the mouth of the canyon, I had huge blisters on my feet. Jess showed up and drove me back to the office, where I realized that I had lost my key card to the office building at some point during the ride.

I walked into my office, plopped down on the floor, covered from head to toe in bike grease, stinking like you wouldn't believe, and still in my bike shorts.

Later that day I drove Paul Cyclemon to a bike shop where they determined that his "rim tape" had "fallen off."

I don't know anything about anything. But that sounds really bad to me. And it just makes me wonder how many other things could go wrong in the next three weeks. THINGS I'VE NEVER EVEN HEARD OF.

You guys. I don't know if my enlarged heart can take this anymore.

Receptionist: Dr. So and So's office, how can I help you? Eli: Yes. Good day. I am looking for a doctor. Receptionist: Um . . . ok. Any doctor in particular? Eli: Well, I'm not sure. You see, my coworker gave me this number and he said 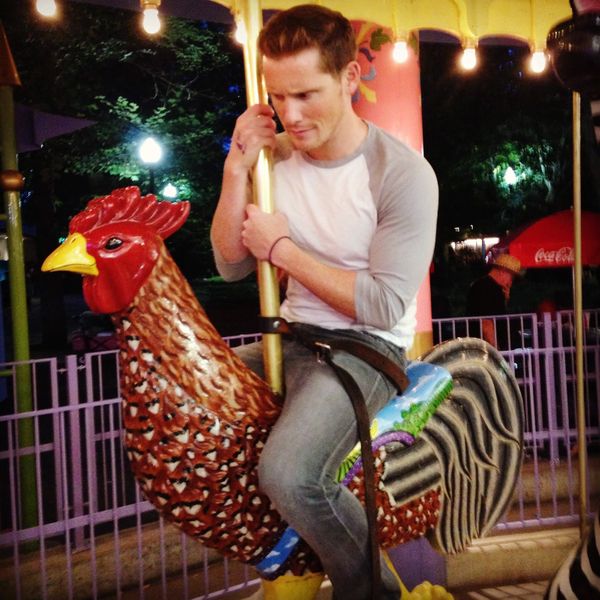 Look. I know. This is supposed to be a Pictures and Distractions post. I know the rules, you guys. Can everyone please stop yelling? I can't do a Pictures and