Look. I know. This is supposed to be a Pictures and Distractions post. I know the rules, you guys. Can everyone please stop yelling?

I can't do a Pictures and Distractions post right now because I have BREAKING NEWS.

This is just like when you get all excited to watch your favorite show and you turn on the TV and find out that they are doing 4 hours of hurricane coverage instead. Or worse. The World Series.

And I know. I'm acting like Stranger is CNN now with all of this "breaking news" talk. Well maybe Stranger should get a little more credit for being an incredible news source than it currently receives. Stranger is still the only news outlet that covered Leotrix, after all.

On to the breaking news. Yesterday I told you that I was panicking because YOU GUYS! BED BUGS!!!

So after all but burning my entire apartment complex to the ground, I went to bed. Sometime around 2:00AM I woke up and felt bugs crawling all over my body. I flew into the air, flipped the light on, and immediately began slapping my arms and legs to get them off of me.

Then I looked carefully and noticed that there were no bugs to be found. I checked the bed. I pulled off the sheets. I looked at every nook and cranny. No sign of any bug anywhere. So I was sure that this meant that I was starting to go crazy.

To be extra thorough, I went into the bathroom and began checking every square inch of my body for bites. I saw the bite marks. All of them. All one billion of them. I stood, hoping and praying that these were just bites I got while "camping" last weekend and didn't notice until now. Then I started panicking. And panicking. And my heart started racing. And then . . .

Who knows how long later, I came to. I was on the floor and had totally broken out into cold sweats. I was disoriented. I had clearly fainted. And I lay there in terror at the thought that I passed out in the middle of the night in my apartment all by myself. And suddenly I remembered at least one of the reasons why I always thought it wasn't a good idea to live alone.

With barely any energy left in me, I climbed back into bed.

When morning came, I got up and went into the shower. I began surveying the bug bites again. And suddenly I felt myself start to get light headed. And then . . .

Who knows how long later, I came to, on the shower floor.

I live very near work and often I leave my car parked in the underground garage at my office. So after a while I began my trek down the street.

I got into the office and was bombarded with a few things that needed immediate attention. A few hours later a couple of friends forced me into the car and sent me to the doctor.

I felt like a total spaz. I showed the doctor my bug bites. All of them. I told her the whole story. I made it as dramatic as possible. I asked her if she thought I had poisonous bed bugs.

Doctor: No. Those are clearly not bed bug bites.

Doctor: We ran some tests though and you appear to have an abnormally large heart.

Eli: WELL THAT EXPLAINS MY CAPACITY TO LOVE.

Doctor: And I'm very concerned about the fainting spells. Do you have any stress in your life right now?

Eli: I can't think of anything.

Doctor: What do you do for a living?

Doctor: Your file says you're an attorney.

Doctor: Do you ever work late.

Doctor: Is your job demanding?

Doctor: Is that why you've been responding to emails during this entire conversation?

Eli: Sorry? Did you say something?

Doctor: Do you deal with heavy subjects at work?

Eli: Well . . . a lot of child sex abuse. But not really besides that.

Doctor: Do you have any big events coming up in your life?

Doctor: Are you exercising excessively?

Doctor: Any social turmoil of late?

Doctor: These things are all stress. And I think you may be losing control.

Eli: Can we just go back to the part where you told me that I don't have bed bugs?

Anyway. Dr. Thang told me that I need to have all of these special alien heart tests done next week because she basically thinks I'm on my deathbed. And I wasn't going to do them but then I called Bob and Cathie and they basically scream-lectured me into submission. So now I'm trying to stay calm so I don't die from panicking about tests that I think are supposed to assess my ability to stay calm.

AND THAT'S WHY YOU SHOULDN'T TURN 30.

P.S. Fine. Here are some pictures for you. So don't be mad.

First, in response to your general concern about Friday's post, in which I told you that apparently someone trained in the ways of medicine thinks I'm dying, I want to give you a slight update and a little more info. I'll be going in 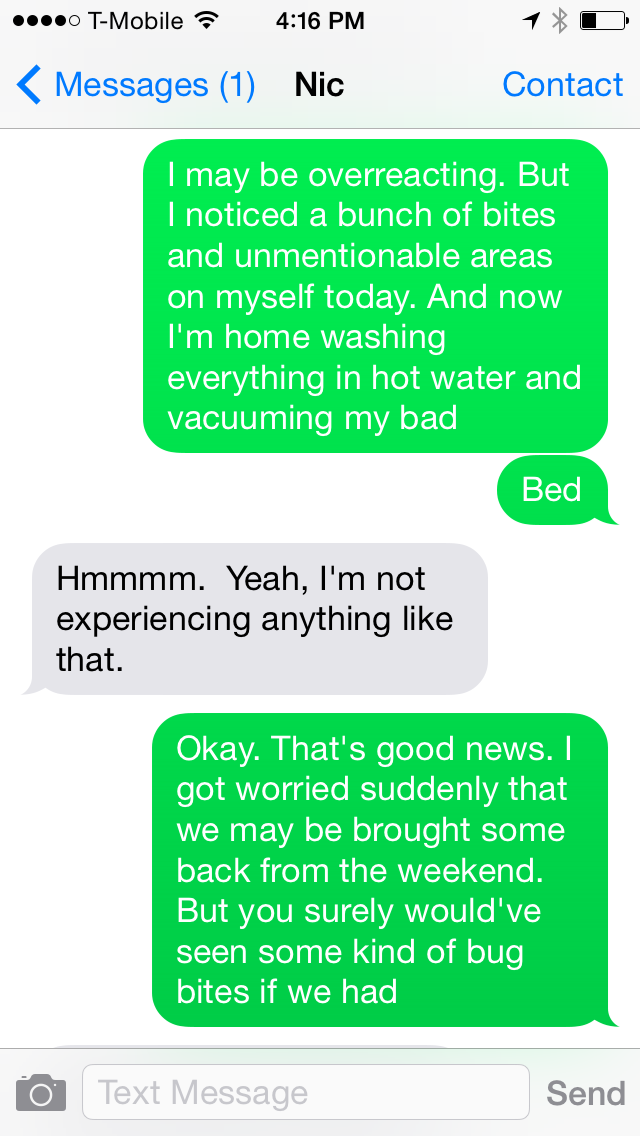 Last night a friend called me pretty late. Friend: OH MY GOSH!!! I THINK I HAVE BED BUGS!! Eli: Don't call me! What if I get them from you! Friend: