Rebecca was babysitting Ollie at her house on Friday, so I texted her to see how things were going.

I logged away in my mind that I needed to try to get the full story from her in person later. I was supposed to go to her house that evening to pick up Ollie but when I tried to call her to coordinate the exchange, she refused to pass him over.

So I wasn't able to see her that night to get all of the details.
Then while I was at a party on Saturday night, she tried to call me. I couldn't answer at the time. So she followed up the call with some text messages.

I didn't see these texts until many hours later and by that point figured she had probably resolved the problem, if there really was one. So I didn't respond.

Rebecca's house was built in 1905. It's a two-story Victorian-style home and it is terrifying and fascinating. Every day she discovers a new strange thing about it and we're pretty sure that it has been featured on Ghost Hunters at least twice.

Because the house is so fascinating, I organized an impromptu parade of homes and invited half a dozen people to come and tour it on Sunday. When I showed up at the house, Rebecca immediately got started on me:

Rebecca: WHY WOULD YOU NOT RESPOND TO MY FRANTIC MESSAGES AT MIDNIGHT?! I COULD HAVE BEEN MURDERED!

Eli: By the homeless man? So was he in your backyard?

Rebecca: First of all, I don't like the casual tone you are using to discuss this. This was a very scary experience for me.

Eli: So what happened? The last I heard you were trying to figure out how much to pay him to rake leaves.

Rebecca: Right. So he raked some leaves and then I paid him and thanked him for his work.

Eli: And what did you pay him?

Rebecca: Twenty dollars. And some peanut butter. And half a bag of Swedish Fish. And toothpaste.

Eli: You paid someone in toothpaste?

Rebecca: IT WAS ALL I HAD!

Eli: Did he seem weirded out by the terms of payment?

Rebecca: No. He seemed to like it. But I felt bad that I didn't have more useful things. And I almost went looking for something else, but then he smiled at me and I realized something horrifying. For ten years I have had a dream that a homeless man breaks into my house and murders me. And when he smiled I realized . . . THIS WAS THE MAN FROM MY DREAMS!

Eli: So was it Crest toothpaste? An already-opened tube?

Rebecca: It was Sensodyne. BUT WILL YOU PLEASE PAY ATTENTION TO WHAT I'M SAYING! THIS WAS THE MAN FROM THOSE NIGHTMARES!

Rebecca: Well not yet! But last night I got home and as I pulled my car into the driveway, I noticed that the light in the very large shed in the backyard was on! And when I looked more closely, I saw that I forgot to put the lock back on the shed! And in the time I got out of my car and walked to the shed . . . THE LIGHT HAD BEEN TURNED BACK OFF!!!

Eli: And that's when you called me?

Rebecca: YES! That's when I called you and you didn't even answer or bother to come and help!

Eli: So what did you do?

Rebecca: I called someone else and he came over and went into the shed with me. We looked around and then noticed that there was this ladder in the back of the shed leading up to a small opening that I hadn't noticed before.

Eli: So the shed had a second floor that you didn't know about?

Rebecca: Yes! A whole second level! And Eli! You won't believe what we found up there!

Rebecca: NO! We climbed up the ladder and found an entire room FILLED with séance paraphernalia! There were a bunch of sticks tied together in the shape of stars and little wood people and there were candles all set around in a circle and this really creepy old map on the wall! A MAP FOR DEVIL WORSHIPERS!

Rebecca: I'm not kidding! It was all covered in cobwebs. It looked like it had been in there for decades!

Eli: Please tell me you took a picture of this!

Rebecca: No! I was so freaked out! I just immediately gathered all of it and destroyed everything! I threw it into the garbage outside.

Eli: [Runs the garbage outside. Digs out a piece that hasn't been destroyed.] Oh. My. Gosh.

Rebecca: I don't know. Maybe it was just a bunch of Girl Scouts singing camp songs. OR MAYBE SATAN HAS TAKEN UP RESIDENCE IN MY BACKYARD!

Rebecca: Eli. I think my whole house is currently haunted.

Eli: Wait. So the homeless man wasn't in the shed?

Eli: So who turned the light on and off after you got home.

Rebecca: Oh. I realized that with my headlights pointed at the shed, it just looked like the light was on in there.

Eli: I honestly can't decide if this story was the most interesting thing I've heard all week, or a complete waste of my time.

Rebecca: Oh by the way, can I borrow a tube of toothpaste? I'm almost out. 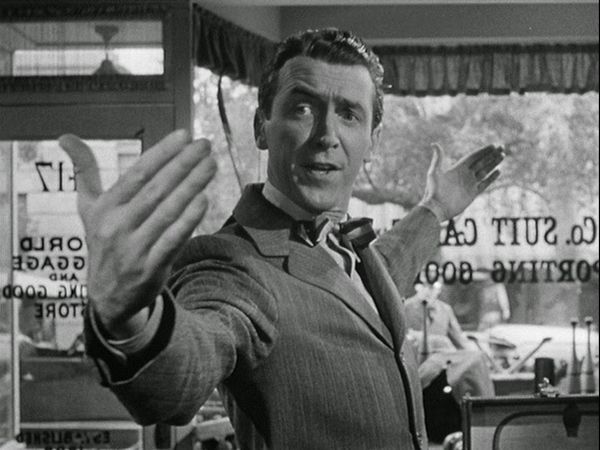 1. Flirting should be funny. One of my favorite lines from the movie is when ol' what's-her-name (the blonde bombshell) is walking down the sidewalk and George compliments her dress. 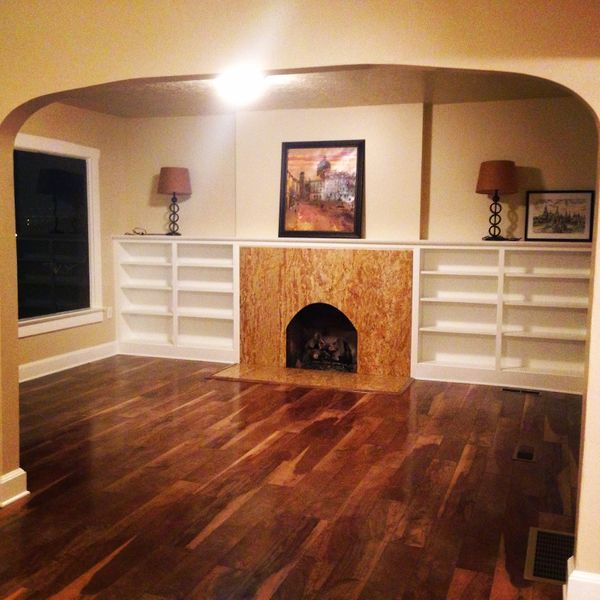 I'm in my mostly vacant house, having spent the afternoon and much of the evening here taking care of installations and bids for various projects. It's all kinds of responsibility