You guys. This thing happened on Friday morning. I hesitate telling you this story because I think you might not believe that it's true. But I'm telling you, this story is true. It will seem unlikely that this could happen to anyone and especially that it would happen to me of all people. But this happened. It really truly did happen. And the moment it did, I wished a witness had been there because I knew that nobody would believe me.

It all started when I decided to seize the day. When I went to bed on Thursday I set my alarm for 5:00 AM. I was going to get up and go for a two-hour run because the half Ironman is now five weeks away and OH MY GOSH I'M GOING TO DIE.

I was so proud of myself for setting the alarm for that early and I decided that I would consider it a victory even if I hit snooze for three hours until finally getting up and just going to work. Because sometimes you just have to be proud of yourself for setting goals.

I was laying in bed and having a very difficult time falling asleep. Probably because I couldn't stop thinking about how proud I was of myself for setting my alarm for 5:00 AM. My mind wandered from this to that until eventually it settled on infectious diseases.

I have some kind of condition. I'm sure I do. If I start thinking about infectious diseases, I get light-headed and I faint. The first time this happened was in seventh grade science class when Mr. Landeen was teaching us about the common cold and after five minutes I passed out cold on the floor.

I don't think I'm a hypochondriac. It's not like I think I have the disease. It's just that the thought that disease is spread, generally, gives me panic attacks and I faint. I'm sure there's some kind of pill I'm supposed to be taking for this but I haven't had time to figure out what that pill is because TV and eating.

Sometime around 3:00 AM, although madly attempting to think about anything else, the thought of infectious diseases had me collapsed on the floor.

The fainting should have been a good enough excuse for me to skip the 5:00 AM run. But when the alarm went off, I decided that I was determined to do this. Rain or shine. In sickness and in health. Twice up the barrel, once down the side. I was going to make this run happen.

I ran. I ran and I ran and I ran. Occasionally I passed another person who was also out in the darkness seizing the day. Every time this happened, I said hello to the person but tried to look super casual so it would seem like I was a regular in the morning crowd.

I want to be popular among the early risers. I don't know if they have class elections at the end of the year but I want a good shot at them if they do since I already have a great campaign slogan picked out. ("McCann can do it!" under a picture of me riding a flying Liger).

Finally I got to a park where I saw the oldest man who has ever existed on planet Earth. I know that by international treaty the oldest living person always has to live somewhere in Japan. But I'm telling you. On Friday morning he was slowly shuffling around Sugarhouse Park in Salt Lake City, Utah, wearing a reflective vest and a winter coat.

The winter coat would have definitely been unnecessary for most anyone else in the world. But this man is the oldest living person on the planet so he can totally wear a winter coat in 65 degree weather if he wants.

But seeing the oldest man in the world is also not the unbelievable story I wanted to tell you.

I'm sorry. I keep telling you things that are mostly irrelevant to the story I alluded to at the beginning. Fine. I'll get there.

Shortly after I left the park, I started running down a quiet street in a sleepy neighborhood. There was not a soul in sight. White blossoms from the beautiful trees lining the road were softly falling, like fresh fragrant snow that can't melt. Adorable hundred-year-old bungalows, nestled in the soil on which they stood, peacefully hummed decades of stories of horse-drawn wagons and playing children and generations of progress. It was serene. It was peaceful. It was awe-inspiring. I was consumed by the history of my city and the culture of its present. My mind was clear. The whistle of the wind churned and soothed the epiphanies consuming my Friday morning run. Everything was right.

I saw it out of the corner of my eye. An animal. It was running directly at me. I thought it must be a dog. I suddenly worried that it might be rabid. That it was looking to attack me. I had flashbacks to all of the times the stray dogs chased me down on the street of Palau. (The singular form of the word "street" in that sentence was intentional, by the way).

I quickly picked up my pace, looking to my left to get a better view of this dog. And then I realized it was not a dog.

You guys. I know you aren't going to believe me when I tell you these next parts. But this really is true.

It was not a dog. It was a black cat. And it was sprinting directly at me. Staring me down with the look of pure evil in its eyes.

I had never seen a cat run at a person before. This seemed unreal to me. I knew something must be wrong. I quickly assumed that once it got close, it would turn and scat.

But it did not.

It caught up to me and began running behind me. The same way all of those people ran behind Forest Gump. It followed me. And it followed me for a while.

I was terrified. I didn't know what it wanted. I had never seen a cat behave this way. Every time I sped up, the cat would match my new speed. Sharp turns did nothing to throw it off. Loud noises wouldn't deter it. It seemed there was nothing I could do to get rid of it.

It reminded me a lot of a terrible relationship I had once.

And then, finally, after several minutes, it made its move.

The cat's movements were so quiet that I wasn't able to anticipate what it did.

I have a small pocket on the back of the running shorts I was wearing. Inside that pocket I had a little baggy of gummy candies. I forgot that they were in there. I had packed them so I could have a mid-run snack. A snack break that hadn't yet happened.

Somehow the cat must have known about the candy. And the cat must have a sweet tooth. Because this feline leapt into the air, dug its infinite number of claws into my butt (NOT THAT WE KNOW WHAT THAT IS CATHIE!), and sunk its teeth through the shorts and into the baggy.

And that was a really weird sentence to type.

I tried shaking it off, Taylor Swift style. But it was holding on tight. I jumped up and down, screaming. The cat rode me like I was a bull at a rodeo. It didn't want to release.

I had a sudden flashback to The Princess Bride when Wesley or whatever his name is was on Andre the Giant's back and Andre starts smashing him against walls to get him to release. I spotted the nearest hard surface and made a plan. I started running toward a fence. But before the plan could come to fruition, the cat released on its own accord.

It dropped to the ground. I looked at it. It looked at me. Two creatures up early, both attempting to seize the day in different ways. We communicated with our eyes. I told the cat that I didn't like it. The cat told me that the feelings were mutual. We both had to admit the other was having a pretty good hair day, though.

And then it turned and walked away. I watched it as it did, still trying to figure out what kind of a creature this was.

And I swear to you. I'm not making this up. After it got about 20 feet from me, it cranked its head, looked over its shoulder, and stared me down. It freaking stared me down. It had attitude. This cat had some serious attitude. It looked at me for about 10 seconds, and then without warning, it sprinted into the bushes, undoubtedly to await its next victim.

You guys. Sometimes I think Harry Potter might be real life. 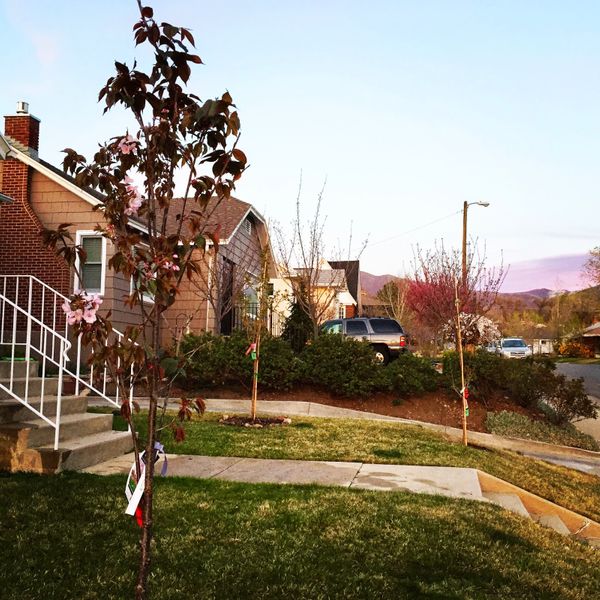 I heard the shovel clank against something hard, and my whole body shook violently when it did, causing me to fall backward. The metal tip had gone less than an

Bob and Cathie showed up at my house tonight for another landscaping consultation. You guys. Everyone in this world needs a Bob and Cathie. No. I'm taking this a step