I heard the shovel clank against something hard, and my whole body shook violently when it did, causing me to fall backward. The metal tip had gone less than an inch into the grass when this happened. My sister, Krishelle, who had shown up bright and early at Bob and Cathie's beckoning to supervise the ordeal stood across from me, offering barely more than moral support.

We were twenty minutes into digging the second of four holes so I could plant these trees that had been delivered earlier in the week. I had oh so naively assumed that this would be a quick and painless project.

You guys. John Denver lied to us with that magical voice and admittedly exceptional head of hair. Because he made it sound like you could basically do it in your sleep. But I planted four trees for America this weekend and it was far and away the most difficult thing I've ever done in my entire life.

By the time we were halfway done, I wanted to leave on a jet plane and never come back again. And I am now considering suing the entire music industry, Johnny Appleseed, and the United States of God Bless America for not doing a better job of protecting me from the atrocious manual labor that was thrust upon me for several hours on Saturday.

Also, I can't understand why Ironman hasn't sent me a finisher medal for what I endured on that hot, miserable, March morning. But I'm pretty sure I don't have to do the race anymore or keep going to work.

The lady at the tree store told me to dig the holes twice as wide as the root ball. And she said it in the same voice you would use to tell someone to flick a speck of lint off their collar. So I assumed that planting the trees wouldn't be a challenge.

Tree store lady did not however warn me of the apparently very real possibility that my house was built on the world's densest rock.

Every Mormon reading this just heard eleventy thousand children voices in their head yell-sing "the wise man built his house upon the rock!"

Well, I hate to break it to the Mormons, but primary songs also lied to us. Because in my case, the careless jerk who didn't think through his life choices built his house upon a rock and now I'm suffering because of it nearly a century later.

First John Denver and now primary songs!? EVERYONE LIED TO US!

Every couple of inches we hit a new layer of five-pound rocks that we had to dig out one at a time. This process was taking an eternity, and at the rate we were working, the trees were going to be General Sherman sequoia size by the time we were ready to plant them.

One of us, I don't remember who anymore, came up with the brilliant idea to start filling the very shallow holes with water. The idea was that if the holes were slick and muddy, the rocks would slide around more easily and it would be possible to dig more effortlessly.

Technically this worked. It is technically true that we were able to dig the holes in a fraction of the time after we let the hose run in them for a few minutes. The rocks did move around and come out more easily. Technically this was an easier way.

However. And you knew a "however" was coming because of the amount of times I semi-appropriately used the word "technically" in the prior paragraph. Filling the holes with water created a new set of problems.

My house sits on a tall hill. Much of the front yard slopes down dramatically to the street. While the rocks now came out much more easily, so did everything else.

I had never seen a mudslide in person before, but I was pretty sure this is what one looks like. And I was very tempted to run inside multiple times to see if there was an emergency broadcast about this one on every channel. But I was, well, covered in mud and not allowed out of the front yard at the time.

We looked like swamp people. And when I say "we" I mean "I" because Krishelle was just standing off to the side monitoring the mess and taking mental notes for her report back to Bob and Cathie.

She always was kind of a snitch.

Then, to my dismay, the mailman came by.

Mailman: My oh my. Tsk tsk tsk. Looks like you're in way over your head there.

Eli: I thought you people stopped delivering mail on Saturdays.

Mailman: I thought you people discovered shelter and stopped living in squalor.

Eli: Oh my gosh! Cute blue shorts! Where did you get them? The dumpster behind K-Mart?

Mailman: I took them from your mom's closet when she tore off the shorts I was wearing on our date last night.

Eli: That's amazing! I just assumed there was no way you could ever get a date!

Mailman: Oops. Looks like I only have seven-houses worth of junk mail for you again today.

[Mailman drops ads in the mailbox, walks over my flowers, and leaves]

And it's true. I don't totally know when or why my contentious relationship started with the mailman, but I think we both kind of like it. And I really wish he hadn't shown up at my lowest of lows on Saturday and dished out better burns.

The mailman's turning up suddenly made me realize that other people could come by and see this mess, too.

And right on cue (que? Quueueu? I feel like nobody answered this one for me the last 12 times I asked), The Perfects all came out of their house in their Sunday best (even though it was only SATURDAY) and turned in unison to look at me.

I stood among the flowing muddy rubble. Clumps of Earth dripped from my hair and face, and a shovel, comically, slid deeper into the hole in which I had left it, like it was being consumed by a swamp.

The Perfects politely waved, climbed into their probably-electric and perfectly spotless vehicle and drove away.

I could almost feel someone drafting the petition to have me removed from the neighborhood. 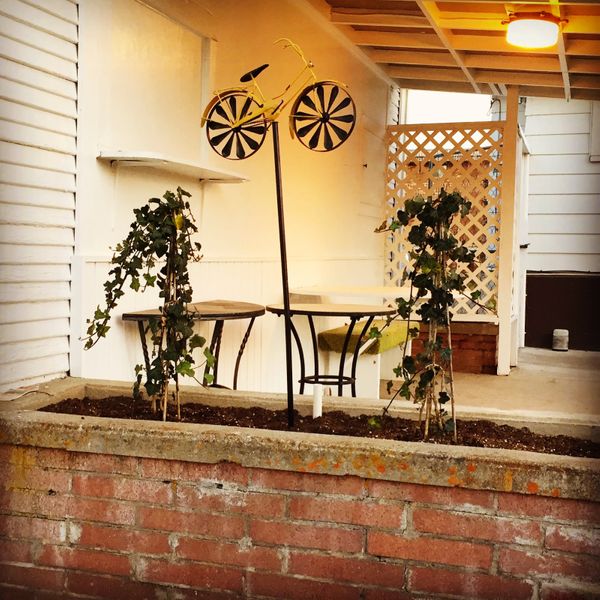 I got an email this morning threatening informing me that the half Ironman is exactly one month away now. I immediately went and got into the pool and flopped around

You guys. This thing happened on Friday morning. I hesitate telling you this story because I think you might not believe that it's true. But I'm telling you, this story is true. It will seem unlikely that this could happen to anyone and especially