Today I walked into the bathroom at the office. Bathroom? Restroom? I never know what you're supposed to call it when it's not in your home. I know there isn't a bath in there. Unless I just haven't been very observant. But I don't like it when people call it "restroom." It sounds gross.

Who goes into the bathroom to rest? Maybe if they put a couch in there or some beds or that massage therapy music with dim lighting I could get behind "restroom." But they don't even have carpet. It's gross and somehow-always-a-little-damp tile. And florescent lighting. Nothing says "this place is not for resting. Move along." like florescent lighting.

And I refuse to call it "the toilet." First of all, a toilet is a single object and the whole room is not a toilet. Unless you are using any bathroom at any gas station in America in which case calling the whole room "the toilet" is probably appropriate. Or at least accurately descriptive. But in my office, "the toilet" should only refer to the porcelain bowls and the floor right below the urinals.


Secondly, the word "toilet" is disgusting. It should never be used in any circumstances whatsoever without exception. Shame on you all for reading it several times in this post.

None of this was supposed to be the point of this writing today. But here we are, halfway down the page, and still without a proper name for the room I need to refer to in order to tell you what happened today. Which leaves me with no other choice than to stop calling it "bathroom" or "restroom" and start calling it "Tamiville."

So I walked into Tamiville this afternoon. I was minding my business, just like I always do when I walk into Tamiville. Because Tamiville is not a place for making friends. OR for resting. Tamiville is a place where you resolve your issues that brought you there as efficiently and as quickly as possible and where you sometimes have to pretend you just came to blow your nose because you see your boss at the urinal and there's no way in hell you're going to go stand next to him.

By the way, there is one very old man at my office who insists on having exceptionally long conversations with me whenever we're inside Tamiville no matter how many times I make goodbye sounds and start walking toward the door.

In case you don't know what goodbye sounds are, they are a series of subtle sighs and voice inflections that people do when they are leaving a party. My sister Krishelle and I try to make these sounds in the background whenever we're at any outing with our extended family, hoping that this will subconsciously prompt people to start wrapping it up. We have no idea whether this ever works, but we have been doing it consistently for 1.5 decades now.

Anyway, I walked up to the urinal, began taking care of my business that brought me to Tamiville in the first place, and then noticed, to my horror:

I know photography is generally not allowed in Tamiville, but I thought this needed to be documented.

You guys. By my count, there are at least four Hershey's Kisses wrappers there. Which leads me to believe that someone stood at this urinal long enough to consume FOUR Hershey's Kisses. Never mind that this required amazing hand coordination, since one hand was, presumably, not free. Never mind that it is absolutely disgusting to bring food into Tamiville. What I would like to know is WHO THE HELL HAD TO PEE LONG ENOUGH THAT THEY WERE ABLE TO UNWRAP AND CONSUME FOUR HERSHEY'S KISSES?!?!

Also, WHY would this person leave the wrappers on top of the urinal? Was he proud of his achievement? Did he want others to see this?

In the apartment building I lived in before I bought my house, and which building I lovingly referred to as "The Rest Home," my elderly neighbors used to leave items on a table in the lobby for anyone who was interested. These usually included rust-stained doilies, high heels from 1961, and many incomplete sets of chess.

Maybe the Hershey's Kisses man was just doing the same thing? Maybe he thought the next person would be interested in the wrappers.

And I guess he was sort of right. Because I was probably the next person. And I was interested in the wrappers. Interested enough to take a picture and broadcast it to the world, in fact.

Now I'm impressed with that man's coordination, his very large bladder, AND his foresight. 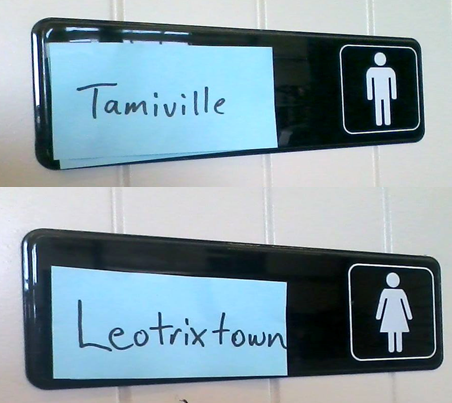 After yesterday's post regarding the happenings inside Tamiville, one Stranger, Suzanne, sent in the above photo. She posted signs on the doors of the Tamivilles in her office because she

I don't usually think time is generally accelerating until I get a notification that my dentist appointment is approaching. For many years I was terrified of the dentist because I always felt like dentist offices were kind of judgy. And not the good kind