I got to spend a great deal of time with Corey in New York City over the weekend. Corey is one of the closest friends I've ever had. I can't call her my best friend here because Lee will freak the hell out and accuse me of calling too many people my best friend and for not including him in that.

I'M PLAYING HARD TO GET, LEE.

Corey is the smartest person I've ever met in my life. Her brain works at levels I can't comprehend. She is also extremely charismatic and the most strong-willed person I've ever known. Because of this, she sort of always finds a way to get exactly what she wants in life and I am totally convinced that one day she will be ruler of the Earth so I'm trying to stay as close to her as possible.

Corey and I met in law school. A few weeks after law school began in 2008, we competed against each other in a mock negotiation competition. We had never seen one another before setting foot in that room and for the next hour we yelled at each other so condescendingly that the moderator had to intervene.

We immediately became frienemies. We recognized that we had nearly identical personalities and senses of humor, but we were both so stubborn that it seemed impossible for us to live peaceably.


Then, a few weeks later, The Great Torts Catastrophe happened. And we have been like family ever since.

Law school is a terrifying experience, particularly in the first year. It is cutthroat and competitive at all times. It is exhausting.

Professors give reading assignments that everyone is expected to have poured over before attending class. The professor will then call on students at random and grill them about the material of the day.

Corey and I had one class together wherein the professor had made it very clear that if anyone was caught unprepared for class, there would be serious repercussions, including a significant deduction in the student's grade.

On that infamous fall day in 2008, Corey and I were entering the classroom when I made some comment to her about the reading assignment. To my horror, Corey informed me that I had gotten the assignment mixed up and that I was in fact very unprepared for that day's discussion.

My face went white and panic came over me. Corey suggested that I wasn't at great risk to be called on that day because I had been called on recently in the class. This sounded comforting and so we took our assigned seats on opposite sides of the room and the bell rang.

Class proceeded. Things were going along just fine. And then, with ten minutes remaining in the class, I heard some terrifying words.

"Mr. McCann, could you help us with this next case?"

I froze. I was immediately convinced that my entire life was about to end.

With a lump in my throat so big you could see it from space, I nodded, and turned the page in my book to the case the professor had referred to.

And a second before I could open my mouth to say something, out of my periphery, I saw Corey's hand shoot into the air.

The professor turned to Corey, who said she had a question, looked down at her book, quickly located a Latin phrase on one page, and asked what it meant. The question was wholly irrelevant to what was happening in the class, but it was the first thing that came to her mind.

The professor answered the question and then turned back to me to proceed with the class material.

And then Corey's hand went back into the air and she called out, "can I just ask one follow-up question real quick!?"

The professor allowed it. And Corey's "follow-up" question was basically a repeat of the last one.

I knew what she was doing. And I watched, entertained and grateful as she stalled for me.

My friend Autumn who sat a few seats away from me seemed to pick up on it, too. She leaned her head down, looked at me, and intensely whispered, "start reading" moments before her hand went into the air to ask another irrelevant question.

I skimmed the case as a flurry of off-topic conversations happened around me before finally hearing the professor respond to Corey's most recent question, "Ms. Hansen, why don't you come see me after class if you want to talk more about this. We really need to get back to this case."

The professor turned back to me and said "Ok, Mr. McCann. Where were we?"

And before I could say a word, the bell rang.

The professor rolled her eyes and told me I was "saved by the bell."

The class was dismissed. Corey walked out, without saying a word about what had happened. She didn't wait for a thank you. She just went about her business.

I ran into that professor the next day. We chatted for a minute and as I started to walk away she called out to me, "Mr. McCann, I will expect you to be prepared for class tomorrow." I froze and nodded at the possible confirmation that this professor was not fooled by what had happened. She looked at me with a glint of humor in her eyes and then added, "that Ms. Hansen is a very good friend to you."

The professor knew exactly what I knew. I wasn't "saved by the bell" that day. I was saved by one of the best friends I would ever have. 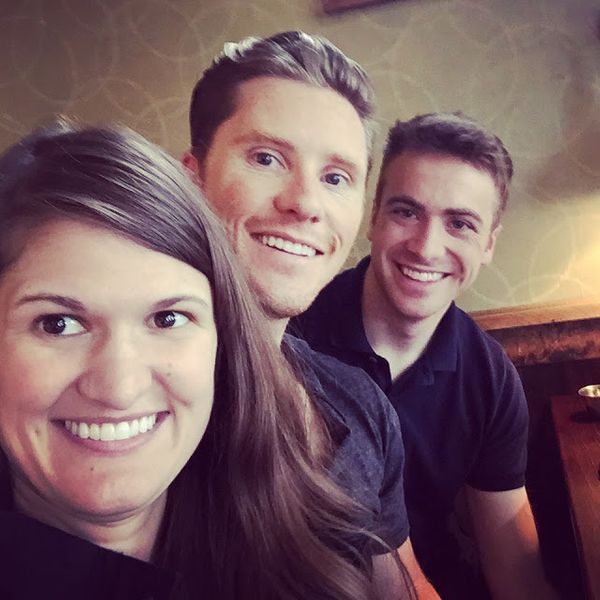 You guys. Mr. Pants is coming to sleep over at my house starting tonight for the WHOLE weekend! He is so excited and has been texting me all day. We

I’ve mentioned to you before that the stairway to my basement is basically one of those caves from The Descent. To get through it, you have to lie upside-down at a 45 degree angle, suck in your stomach, and have someone slowly lower