I walked two houses down the hill to greet my neighbor, a blonde woman, age 50 or so, who rivals The Perfects in magazine-cover landscaping and lawn care. It was 9:30 PM, a time not usually reserved for greeting neighbors for the first time after living two-hundred feet from one another for 18 months.

I felt compelled to do it out of jealousy. Not jealousy for the neighbor. Jealousy for Matt's new life in his new neighborhood in which smiling pedestrians line the street and force-feed any passerby a history lesson on the area, the speaker's genealogy, and the schedule of mandatory events for neighborly bonding.

Somehow, without ever having lived there, I know more of Matt's neighbors than my own. I've also been to neighborhood parties there, I've stepped inside people's homes, and I've played with multiple dogs, all things I have never done on my own street.

And so I made a new promise to myself. I would transform my neighborhood, one neighbor at a time, and turn it into the social place I know it has the potential to be. And who better to get things rolling than me, the guy who lives smack dab in the center of the street.

Obviously I couldn't start with The Perfects. 18 months full of humiliating and unexplained encounters with them has likely planted me on some sort of watch list in The Perfects's'e's' home. And I haven't fared much better on the other side, a house which, I recently discovered, has had a very open view of me showering in front of a window that I previously and incorrectly thought was positioned in a way to obscure any meaningful line of vision.

I'm not saying that I've tarnished my reputation with those neighbors to the level that I have with The Perfects. But I am saying that I'm about one embarrassing slip up away from it being a photo finish.

And so, understanding that I've socially grazed the land most immediately surrounding my own house, I set off, at 9:30 PM, to find new resources for community camaraderie.

I wasn't exactly dressed for the part of "man good at first impressions." No. I was barefoot. Wearing sweatpants stained with one of the last 27 paint projects at Matt's house. Sporting my Ironman Boulder shirt that is 12 sizes too big, or, as my Internet haters would call it, "exactly the appropriate size."

But I approached anyway as I saw her dragging her garbage bin to the sidewalk, suspiciously a day before it was needed.

I stuck my hand out to greet her (the hand not holding the block of cheese I was snacking on) and told her I was her "new neighbor. Well, not new new. I've been here 18 months. And I've been meaning to come meet you, but I just haven't and I have no excuse. I'm a very good neighbor. Unless you ask The Perfects. I call them that because I don't think they make any mistakes and that is a very intimidating thing to live next to. And now I'm embarrassed every time I see them because they once caught me stealing from their recycling bin. But I wasn't stealing. I was just using it because I didn't have one. Anyway, don't ask The Perfects for a reference. What's your name?"

She told me it. And then said, "oh I know what you mean about misunderstandings with neighbors. For five whole years I called the guy across the street Gary but then found out his name was Paul. Where did I get Gary from? Anyway, our relationship was toast before it began because I took in a stray cat for five months because I thought I was being a good citizen even though I don't even like cats. Then I got all of this mail for someone named Paul and I didn't know any Paul so I just set it aside to deal with it later. Then Gary showed up at my door with my mail and asked me if I had any of his and I said I didn't and then he saw the mail sitting on my entry table and he said that was his so then I didn't know if I should tell him that I thought his name was Gary for all those years or if it was better to just let him think I was trying to steal his mail. But before I could say anything else, the cat walked in and Gary/Paul yelled 'MY CAT! I'VE BEEN LOOKING FOR HER FOR MONTHS!' And I couldn't even pretend that the cat just walked in because I had put a collar on her and a bow on her head, plus there was a framed picture hanging up of the two of us at a wedding together because I had kind of grown attached to the cat, which I named Suzette. EVEN THOUGH I DON'T EVEN LIKE CATS."

She stopped talking and then gave me a look that communicated "I don't know why I just said all of that PLEASE DON'T LEAVE ME."

And then she added, "and I just realized tomorrow isn't garbage day. I never can remember when garbage day is."

We hugged for a very long time.

Twenty minutes later I got a text from Skylar asking how my attempt to meet a new neighbor went, since I told him about this just before walking down there barefoot.

I responded with this selfie, which I took in her kitchen while she rifled through a drawer to find a spare key to give me.

I'm now house sitting for the next week. 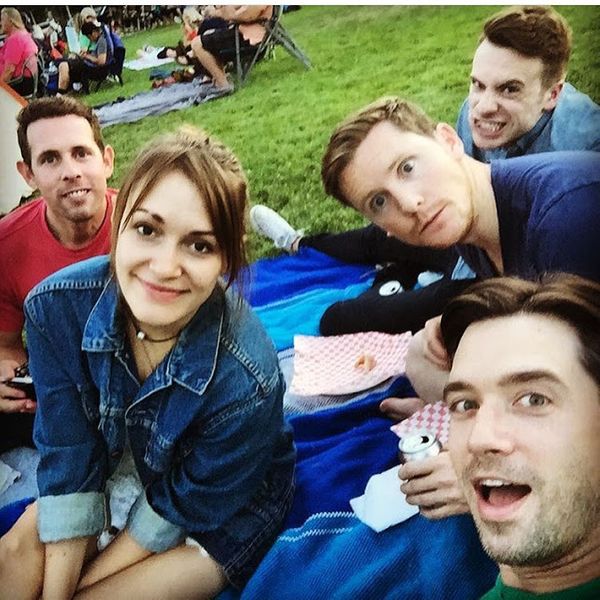 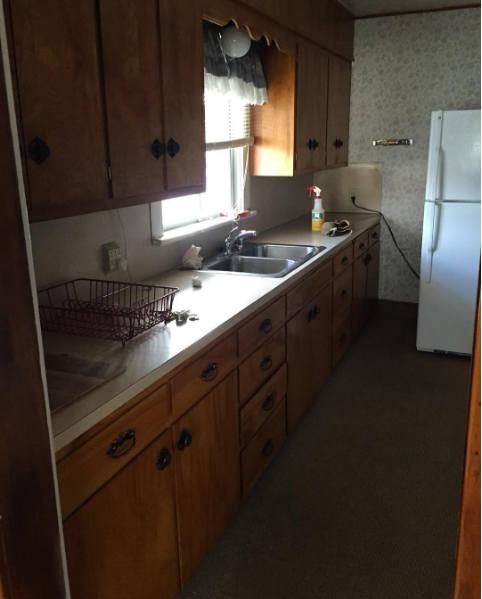 The Broome Bungalow project (Matt's house) is finally about to hit "move-in" date. And everyone is looking forward to this more than any child has ever looked forward to Christmas