Last week I was on a cruise ship for seven days with my family. It was basically the Titanic. I can still smell the paint.

It was an Alaskan cruise. And I was nervous about going because I once got trapped in a very small space in the middle of the ocean for an entire year and I wasn't sure I was ready to relive that.

Fortunately, my family is exceedingly fun to travel with, which was actually really helpful in preventing anxiety attacks so big you could see them from space. Also, Alaska is the most beautiful place that has ever existed and I swear to you I saw a bald eagle fly over a bear catching a wild salmon for her three cubs right next to a waterfall coming off of a glacier surrounded by forest. I actually believe that anyone who visits that exact spot automatically becomes a U.S. citizen.

I was pleasantly surprised that within the first 48 hours I didn't attempt to dive off of the boat and swim directly for Manhattan, which would have been at least twice as far as an Ironman swim.

I found ways to trick myself into thinking that I was not stuck on a ship, a thousand miles away from meaningful civilization. I did this by making friends, usually in 'da club on the top deck every night after my whole family went to bed at 10:30.

Most notably, I met some of the performers within a few hours of boarding, performers who were desperate for fresh company after being trapped on the sea for an entire summer. I also quite nearly became blood brothers with a middle-aged mother of four named Margarita who can out dance all of you. There was also an Aussie called Cameron who is incapable of not oversharing about his life, and a southern Baptist named Will, who spent pretty much the entire week walking laps around the upper deck, like he was looking for a way out and was sure he simply missed the exit on the first 12,000 passes.

Occasionally we would dock in Juneau, or Skagway, or Ketchikan, and I would get cell service so I would text my friends at home and inform them that "OMG my social life is more vibrant on this ship than it is in Salt Lake City!" And they all seemed really surprised by this. So did my family, who upon hearing about the previous evening's happenings commented every morning about how strange it was that I seemed to have made so many friends in such a short time.

Although I remained relatively calm throughout the week, my anxiety and cabin fever started to build very quickly in the last few days, and by day 6, I was quite nearly ready to explode. We had been at sea for almost 48 hours without docking anywhere by 7:00 that evening when we finally arrived in Victoria, Canada.

I politely informed my family that it would probably be best for everyone involved if I took off on my own that evening, as I had so much pent-up energy that I planned to basically speed walk across town until I wore through my shoes, socks, and bloodied feet. And I basically wasn't offended when they put up no protest.

And so, at the earliest possible moment, I set off, nearly sprinting, for town.

Within a few minutes, I found Aussie Cameron walking next to me, talking my ear off about every private thing he has ever experienced in his life. And we continued like this for the next three hours. He kept up pace, until finally suggesting that we stop in a cafe to get some tea, since it was getting kind of chilly.

We did so. I ordered tea. He ordered soup. And then we left.

We walked for some time until he finally said that he needed to head back to the ship, at which point he darted across a busy intersection and never looked back, not so much as saying goodbye. I thought this was odd, considering that we had just hung out all week and spent the entire evening together and that we would never see one another again (and we also didn't know each other's last names and so would have no way of finding one other on social media).

Just then Skylar called me. I told him about my evening, and explained to him about the oddly unfulfilling farewell.

Eli: It is really weird. I feel like I'm having such strange experiences with people this week and it's making me feel like I might be a little crazy.

Eli: I don't know. He just kind of came out of nowhere and then completely disappeared. It's almost like I imagined him.

Eli: Oh my gosh. I think I'm having that Sixth Sense flashback scene experience right now where he suddenly realizes that he never interacted with anyone but the kid who could see dead people AND SO THAT MEANT HE WAS A GHOST BECAUSE HE DIDN'T EVEN TOUCH HIS FOOD AT THE RESTAURANT OR PULL OUT HIS CHAIR!!!

Skylar: Slow down. What are you talking about?

Eli: I'm just realizing that Cameron got soup at the cafe but he asked me to order it for him because he went to the bathroom and then he didn't even touch it and when the server came to the table and commented on it I explained to her that he wasn't that hungry after all because he already had dinner and I remember thinking it was weird that he didn't jump in and explain himself considering that he's so talkative and now suddenly I don't remember him interacting with anyone other than me.

Skylar: Ok. You're freaking me out right now.

Eli: No wait! I did see him interact with someone else. He talked to Margarita the other night.

Skylar: "Margarita?" A woman you met at a bar? Dare I ask what she was drinking?

Eli: Oh my gosh. She was drinking a margarita.

Skylar: So she's probably not real either.

Eli: But wait! I saw her talk to Will a couple of days ago!

Skylar: Will, who spends all day walking around the ship, looking sad, and trying to find an exit? Have you seen him interact with anyone other than "Magarita" or "Cameron."

Eli: . . . no. I haven't. Oh my gosh. I'm freaking out right now. I'm not sure if I see dead people or if I have imaginary friends. And I don't know which of those two I hope it is.

Skylar: Has anyone in your family seen any of these people, too?

Eli: I JUST TEXTED YOU THE PICTURE I TOOK OF US!!!

I swear to you I have no further explanation than this. But I seriously get the chills every time I look at that picture. 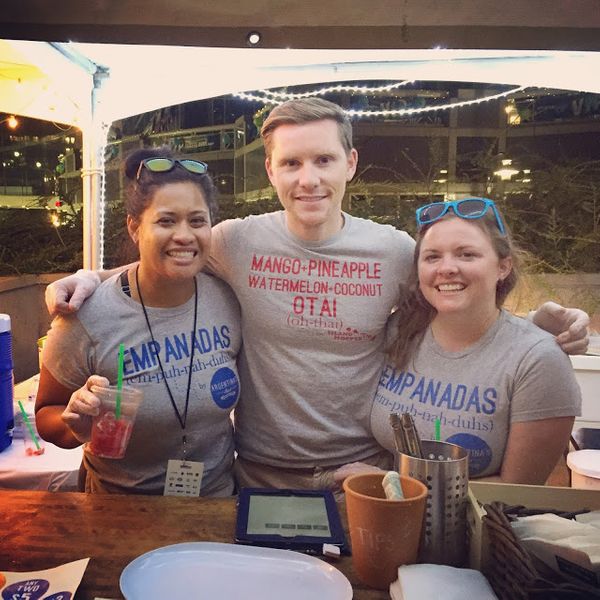 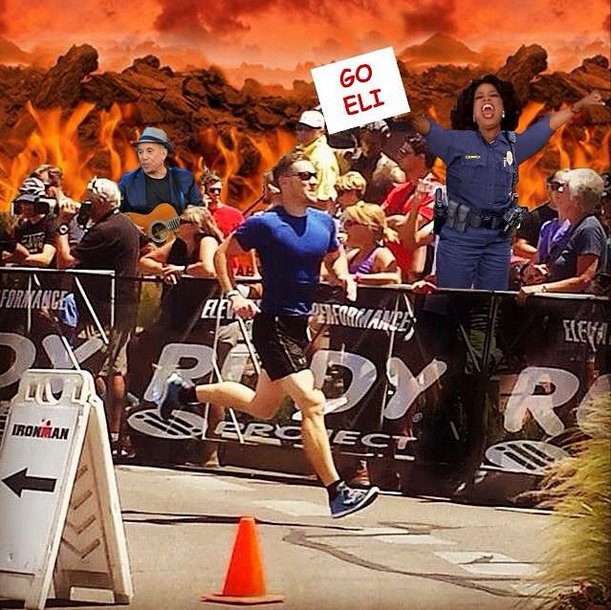 I realized some time ago that New Year’s resolutions work as well for me as they do for most people. I embrace them enthusiastically on January first and then