For the last couple of years I've been silently obsessing over something about which I have been unable to come to a conclusion.

I don't love conflict. I'm usually a peacemaker. I'm not bad at dealing with conflict, but I don't like what it does to me. If I have a dispute with someone over something that really matters to me, it is usually difficult for me to get it out of my mind until that dispute is resolved.

What this means is that I tend to keep frustrations to myself in order to avoid rocking the boat.

Good thing I didn't decide to go into a career where people sometimes have disagreements!

When it comes to representing other people's interests, I buck up and deal with the contention, even if it does have a negative effect on me.

I hadn't realized how damaging this flaw can be until a few years ago. By the time I was leaving Palau, my relationship with Daniel had completely soured. There were a lot of reasons for that, some of which I've talked about here before. But as I unpacked that complicated year over the next many months, I came to realize that a big reason things became so unnecessarily toxic was because I had clammed up and completely avoided being real with Daniel.

Daniel and I both did things that were hurtful to one another. And had I been willing to have some "hard" conversations with him pretty early on, we probably could have navigated much of that hurt in a healthy way.

Daniel was much much better about this. From time to time he would approach me and tell me that he didn't like something I had done. I consistently caved when he did this, agreed with him, and told him I would change that behavior. The problem was--this wasn't always sincere. Sometimes I thought he was being unfair to me or that he didn't realize why my action was the correct one. But I caved anyway in order to avoid the confrontation with him and in order to end the hard conversation that he had started.

What then happened was predictable. I wouldn't actually change the behavior. Or I would and I would silently resent him for "making" me agree to do something I didn't want.

It was a terrible cycle.

Daniel left Palau a month before I did and I had a lot of quiet time during those last few weeks in which I packed up my life and said goodbye to experiences I'm still trying to process.

By the time I got back to Salt Lake City, Daniel and I had not spoken in many weeks. I had some of his things, which he had left in Palau, so we arranged to meet up to pass off those things.

We had pulled our cars over to the side of a street downtown and I handed Daniel a box of his stuff. It was the middle of the afternoon on a hot late summer day. He thanked me, turned around, and walked back to his car.

I was so angry with him. But still unwilling to tell him that.

He turned around and saw me and saw that I looked angry and he yelled over to me, "what is it?"

The question irritated me. He knew the answer to it. He knew that I was angry with him for many reasons, including that I hadn't heard from him in many weeks and that in this moment he was so cordial and short with me after we had just gone through this crazy thing together.

I shook my head at him when he asked the question.

So he walked back over to me, shaking his own head. When he got close to me, he said, his voice raised now, "nobody ever knows what the Hell is going on in your mind and I'm not going to help you express it. So grow up and say what you want or let it go."

Some other things were said, too.

I climbed into my car, having expressed nothing, and drove away.

This is not a happy memory for me. And not one I'm super proud to share now. But, whatever. There it is.

Over the four years since that happened I've thought about it over and over again. And agonized over where the line of peacemaking and ground-standing is supposed to be.

I have a pretty peaceful personal life. One without much contention and drama. One full of people I love and trust and whom I know I could call on if I needed help.

I hate that about myself.

I would love to know what you all think about this. Are you good at finding that line? How do you find it? What side of the line do you find yourself on most often?

And while you think about that, enjoy complete nonsense from someone who I think has always been pretty good at this, my Jolyn Metro. 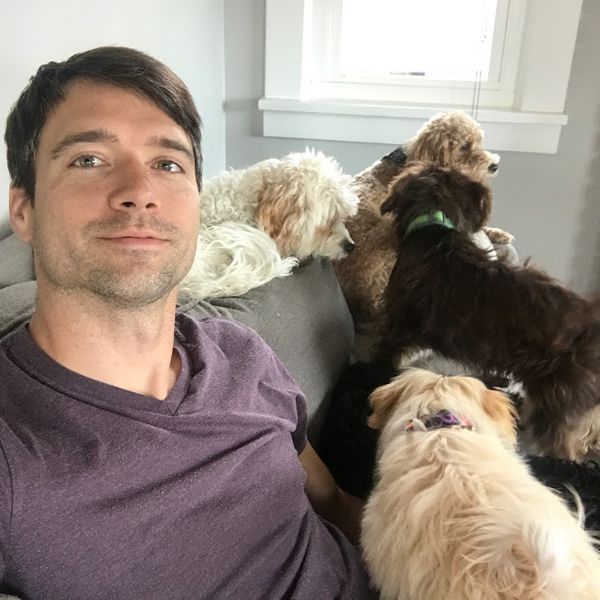 As a follow-up to last week's post in which I implied that Matt may need an intervention if he allows one more puppy into his life, I give you the

This week, Eli and Jolyn (badly) play their favorite game: What The Hell Happened. http://traffic.libsyn.com/strangerville/Short_What_the_Hell_Happened.mp3