A little while ago this thing, that's probably a drug front and is definitely run by the Utah Mafia called "The Beehive", was launched. Meg writes snarky content for it, and we are also running a weekly podcast through it called Hive Mind. In it, we complain about TV and movies. So if you've ever listened to Strangerville and thought, "I would like to hear even more of their thoughts on The Power Rangers," you are in luck.

Hive Mind is being produced under The Beehive's channel, so you can find it on any podcast app by searching for The Beehive and looking for Hive Mind episodes. You can also find Hive Mind here.

And in other news, after a few weeks of break, we are back with new episodes of Strangerville. Please enjoy the below, which includes a story from me about leaving Ukraine recently. For those who hate the sound of my voice, I've included the text of the story.

This time in Strangerville, Meg and Eli absolutely do not judge anyone for breastfeeding their adult children, and a grandmother nervously navigates the security area of an Eastern European airport.
StoryWoven Tarp Bags, by Eli McCannMusic: Jupiter the Blue by GillicuddyFrom: The Free Music Archive​

The airport in the far western Ukrainian town was larger than I expected. The last time I had flown into or out of L’viv the place looked more like a barn than an international port of entry. It was a drafty old building, dimly lit and musty. There was only one room and it contained dilapidated security equipment and half a dozen apathetic employees.

But the town has upgraded since 2014, erecting a modern-looking, albeit small, new glossy airport with at least three runways. There are several check-in desks for the few airlines that serve the area. They even have a store with duty free shopping.

I had spent the last few days meandering through Ukraine with Skylar and with my sister Krishelle. Now we were leaving Ukraine. We had spent a night on a train and a few days before that hardly sleeping because of jetlag. We were exhausted, and barely thinking by the time we arrived at the airport.

We checked into our flight, which was only a small headache, a miraculous feat in that part of the world. And then we made our way to the second floor, hustling through security, a little worried that we were cutting it too close to our departure.

There were a few security guards but otherwise the security area was empty with the exception of the three of us and a woman who was accompanying three kids; I assumed they were her grandchildren.

They were obviously poor—I could tell because of how they were dressed. The grandmother was wearing a tattered black skirt and a red sweater, an odd choice for July. She was carrying a few woven tarp bags, common in Eastern Europe, which were packed to the brim. One of the zippers was broken and clothing in muted colors poked through the top.

This woman and the three children nervously negotiated their way through the security area, using the conveyor belt just opposite to the one we had approached.

The kids were huddled close to her, clearly intimidated by this strange place with conveyor belts and metal detectors and authority figures trying to keep order.

An officer directed them to remove their shoes, which they did, anxiously. I heard the grandmother whisper to the kids “I don’t know why; just do it.” They picked up their shoes and fumbled them toward the metal detector before being directed to place them on a conveyor belt.

Eventually I stopped staring and minded my own belongings, removing electronic devices to place them in bins, and for my travel companions as they interacted with security personnel.

I noticed that the woman and the three children set off a metal detector as I placed my laptop back into my bag.

They were being patted down as we left security and walked toward a passport control booth that contained two windows. A woman and a man sat behind them.

Skylar and Krishelle approached the two windows, receiving their exit stamps, and hurrying off toward the gate without me. I stepped up to the window with the woman sitting behind it. The man in the next booth, having nothing to do, watched us as I handed my documents through the small slit at the counter.

The passport control woman flipped through the pages of my passport, looking for my Ukrainian entrance stamp. She eyed my picture and held it up to the glass to get a look at it next to my face. And as she was surveying me to see if I looked like my much younger passport self, the grandmother from before and her three grandchildren exited security, and hurriedly walked toward me, veering right, and passing the booth.

Noticing them out of the corner of her eye, the woman in passport control yelled to them, “stop! You need to show your passports before you can go beyond this point!”

The grandma heard her, and whipped around, quickly walking back toward the front of the booth. The children followed her as she laughed nervously, clearly embarrassed, and fumbled through half a dozen apologies.

She heaved her bags back around to the front of the booth, dropping them so she could dig through the smallest one for four passports.

The woman at passport control had stopped what she was doing and all three of us, including the man behind the glass, were now watching this grandmother, who continued her embarrassed apologizing.Uncharacteristic of most border patrol agents, but actually very characteristic of Ukrainians, the man behind the booth called out in a sincere voice, “my dear, is this your first time leaving the country?”

“You don’t need to apologize,” the border control woman offered, every bit as kind as her colleague. “We can help you,” the man chimed back in; “just try not to be scared.”

My passport was stamped and I hustled away to catch my flight. I didn’t see the grandma and her woven tarp bags again.

But I thought more about her as our flight took off.

I wondered what her story was, and since I didn’t know it, I made one up. I guessed that maybe her daughter, the mother of those children, had moved to Italy or some such place to get a job and send money back to support her children, something I’ve known other Ukrainian moms to do. I decided that they hadn’t seen their mother in a year or two, and that they missed her. I thought the grandmother must have surprised the kids with the news that they would be visiting her, and that she had probably waited until the tickets were purchased so she could be sure it was going to happen. I imagined that it had been difficult to collect enough money for grandma and the children to go on a great adventure to see her, a couple of small countries away. And I assumed that grandma felt a lot of anxiety navigating all this travel to make this happen.

Obviously I don’t know. There could have been a thousand places for their travels and even more reasons for making them, but I decided that any iteration of their story had to be interesting.

That grandma with her woven tarp bags has seen a lot of change and tragedy in her country. Much of it is recent.

Ukraine is currently fighting a violent and heartbreaking war on its Eastern border. During our visit in Ukraine we saw reminders of this, including several displays honoring the memories of the soldiers and civilians who have lost their lives since the 2014 riots in the capital city.

I stumbled across one of these displays in Kyiv. There was a large wall, covered with the photos of the “hundred angels,” as they are called, who had been slaughtered by the president’s special forces during what was supposed to be a peaceful protest against that president’s policies in 2014.

Next to it, there was a wall, stretching a block, covered with thousands of photos, and names, and basic information about Ukraine’s soldiers who have died so far in the war against Putin’s forces. Some of the soldiers looked almost young enough to be my own children; others, old enough to be my grandparent. It was overwhelming to me, and I struggled to catch my breath as I walked the length of this wall.

I suddenly remembered a message I had received from a friend in Western Ukraine on September 1, 2014. This friend is my age, 34 now. The message came out of the blue. He sent it in English.

Four years later, this friend is still alive. Fortunately his child is not one of those whose pictures we saw in another church in a display highlighting the children of fallen soldiers.

One photo of an 11 year old girl, with a haunting sadness in her eyes, included a quote below it: “I don’t want my dad to be a hero. I just want him to come home.”

Another photo of a skinny 7-year-old boy came with the quote, “my dad is gone and now it is up to me to take care of my mom and my sister.”

A three-year-old’s quote said “my daddy flew to heaven to be a star and sometimes he comes and visits us.”

The grandma with the woven tarp bags probably knows some of the people directly involved in the struggle. She has likely spent nights, lying in bed, sick with worry about what will happen in her country. She surely worries about her three grandchildren—the ones who joined her on her inaugural international trip.

The border agents who guided her through the intimidating process as she apologized for inconveniencing anyone surely worry, too. 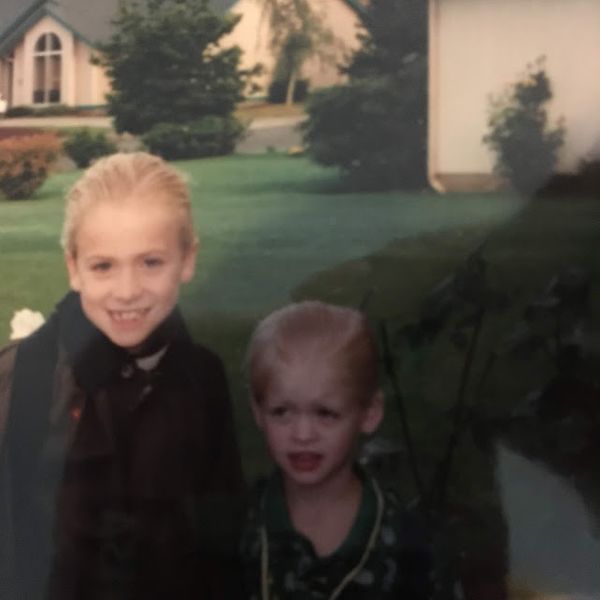 Skylar started medical school yesterday while I went golfing. I would have traded him places in a heartbeat. And no, I'm not interested in going to medical school. I'm just

This time in Strangerville, Meg and Eli absolutely do not judge anyone for breastfeeding their adult children, and a grandmother nervously navigates the security area of an Eastern European airport. Story Woven Tarp Bags, by Eli McCann Music: Jupiter the Blue by Gillicuddy From: