(Hola. Strangerville Live is on July 12. I had a dream last night that I fell asleep during the show and when I woke up everyone had already left and Meg said I slept through my own story and so we had to give everyone their money back. I'm just glad we have a good return policy in my dreams. Get your tickets at THIS LINK.)

It suddenly occurred to me that I had never seen Britney Spears's 2002 cinematic masterpiece Crossroads so this morning I pulled up what the kids are calling the Youtubes and I watched.

Not the whole thing, for that is probably illegal, and stuff. But I found clips, and let me tell you something about Britney Spears's 2002 cinematic masterpiece Crossroads: this is not a great film.

For those who haven't seen it, as far as I can tell from the out-of-order sequence of youtube clips, Britney is graduating high school so she and her two friends dig up a time capsule or something and then Britney dances in her underwear in her bedroom. I don't know. Then her dad is like "YOU'RE GONNA BE LATE" so she has to hurry and get dressed. I think for school? I think she was going to be late to school?

Anyway. Then she and her two time capsule friends which includes at least one character from Orange is the New Black decide to take a road trip for some reason. I don't know why. Something about a boy or college or Britney trying to connect with her mom from Sex and the City.

They take off and ooooohhh boy do they run into some shenanigans along the way. First they meet a man who is old enough to be Britney's father, but in this film he is seemingly her love interest. He has his work cut out for him riding in a car with a few women!

At some point the car breaks down and you might think they're in trouble . . . unless you know that BRITNEY SPEARS IS A CAR MECHANIC!

Except, in order to pay for the parts she needs to fix the car, she has to dance mostly naked on a stage in a karaoke bar.

Sit back down, Gloria Steinem.

Eventually they make it to somewhere and she goes to her bio mom's house and the mom is like "who are you?" and Britney channels her inner robot and says in a totally monotone voice something about "it's me, your daughter."

They apparently have a talk because there's a scene where Britney's friends who are probably now horrified that they were in this film are like "what did your mom say" and Britney is like "she said she wishes I was never born it like totes sucks."

Then I don't know what happens after that, but I assume she learns something about herself. I know she sings that whole "I'm not a girl; not yet a woman" song, so maybe that's the final message?

The point is, why have we not asked Britney Spears to make 100,000 more films, because y'all, this stuff is amazing.

This time in Strangerville, Meg and Eli cyber-gossip, Meg appears on Inside Edition, and a woman experiences her most embarrassing moment in a public wave pool.StoryWave Pool, by Dianne, Dana, and JamieProduction by Eli McCann & Meg Walter 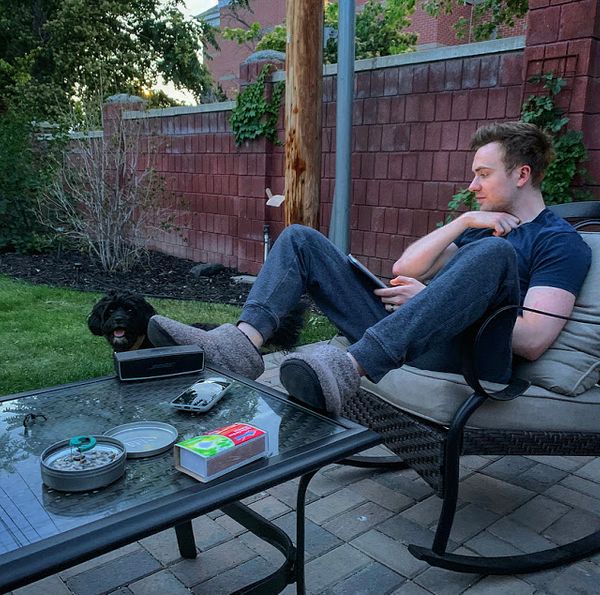 We're out on the patio. Skylar is studying. He decided to pursue a masters degree in the summers because apparently he's not sufficiently exhausted by medical school. This seems insane

This time in Strangerville, Meg and Eli cyber-gossip, Meg appears on Inside Edition, and a woman experiences her most embarrassing moment in a public wave pool. Story Wave Pool, by Dianne, Dana, and Jamie Production by Eli McCann & Meg Walter http://traffic.libsyn.