There are heated blankets and heating pads plugged into nearly every outlet in my house. The gas fireplace is constantly running. Sometimes I come home to find Skylar standing over the stove, warming his hands.

You'd think I was forcing him to live in the wilderness. He acts like we've made a home of the great frozen tundra. "Can you sit on my feet?" he'll ask me once a day. "I promise this isn't sexual," he unnecessarily reminds me.

He carries around the house a gigantic mug that says "Merry Christmas" on it.

He fills it with piping hot tea a dozen times a day. He rarely drinks it. I almost routinely wander the house each evening and collect all of the untouched cups of room-temperature tea he's forgotten about. "I was waiting for it to cool," he says before his voice trails off.

"You're always just waiting for it to cool. Why don't you set an alarm or something so you can remember to drink it?"

Our marriage may not survive the car wars. No matter the temperature, no matter the season, he turns the heater on the highest possible setting. He holds his hands over two vents, shivering. "It's so cold" he hisses as my face nearly melts off.

"Wear a sweater!" I yell at him as he huddles in front of the fire, complaining that it feels like we have the windows open. I check the thermostat. "It's 72 degrees in this house!" I scream, sounding an awful lot like everyone's father.

I spent a small fortune and the better part of two months remodeling a room in the house and turning it into a comfortable office so he could have a quiet place to study during medical school.

A few weeks later he ordered a $20 foldable tray meant for tv dinners. Now he sets it up every evening directly in front of the fireplace, his noise-cancelling headphones on, his feet nearly in the flames, and shivers while he studies.

"Duncan and I are so cold" he'll complain to me, the two of them snuggled together, both staring at me with puppy dog eyes like I'm purposefully torturing them.

"Guys," I say, like both are expecting a thoughtful response from me. "It's July."

Before going to bed every night Skylar will sit on the edge of the bathtub and run hot water over his feet. "It's the only way I'll be able to fall asleep."

Then he climbs into bed and fully wraps himself around me, taking rapid shallow breaths like a Titanic victim. I lie on my back, my eyes wide open, staring at the ceiling, suffocating, but sacrificing what I can for this person I love, like I'm the Giving Tree.

"You're not warming me up. Your body is too cold." he'll complain.

This time in Strangerville, Eli gets botox and he’s not afraid to talk about it. And a woman can’t help but get involved when she witnesses a car accident.

Intersections, by Hauley Farish Music: Crucible by Wildlight From: The Free Music Archive 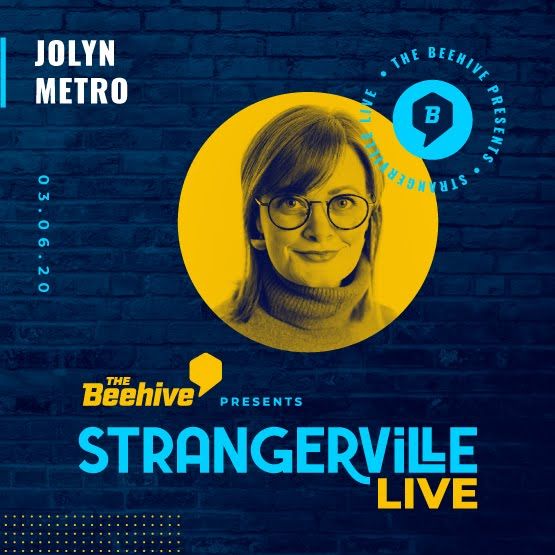 Two things: First of all, we've announced our next Strangerville Live! Come join us in Salt Lake City on March 6 at 8:00 PM. I'm hosting (possibly entirely through

This time in Strangerville, Eli gets botox and he’s not afraid to talk about it. And a woman can’t help but get involved when she witnesses a car accident. Story Intersections, by Hauley Farish Music: Crucible by Wildlight From: The Free Music