Well that supermodel dog last night woke us up at 2:00 AM through an insane amount of heaving. I don't even know how to describe it. I've never seen anything like it before. He was licking the air excessively and then gagging every few seconds. His tail was between his legs and he just looked completely miserable.

Mr. Not Great in Crisis Skylar flew out of bed and started yelling "HE'S SICK! HE'S REALLY REALLY SICK! THIS DOG IS NOT WELL!"

Why does this kind of stuff always happen in the middle of the night?

One of the most frustrating things about dog ailments is that they can't use their words to explain what's going on. Did his tummy hurt? Was something lodged in his throat? Did he eat something strange when we weren't looking? Does he prefer Liza Minnelli or Judy Garland? TRICK QUESTION HE SHOULD PREFER BOTH.

Sky and I both frantically started googling nonsensical strings of words:

"I don't want no bunny banana frog ok no way"

The internet confirmed what we already knew: this was either absolutely nothing or our dog was about to die any second or something somewhere in between for any possible reason.

I tapped Duncan's back several times like he was an old TV I was trying to get to refocus. I don't know whether this actually did anything, but he did vomit so much vomit out of his mouth right after I did this that PETA got an Amber Alert to its phone.

I thought maybe this would fix things, but then he just started the excessive licking and heaving and eye-pleading for death, this time with even more force.

"Hi, our dog is licking excessively and vomiting and we don't know if this is something very stupid or very serious or very in between for absolutely any possible reason."

The woman on the phone told us to watch him overnight and if he was still vomiting in the morning to take him to our regular vet.

At this point Duncan went to the back door and started whining so I took him to the backyard where he dove, face first, into the lawn and started CONSUMING our grass. It was like if you put a goat on a golf course, had it snort cocaine, and told it this was its last meal.

NOT THAT WE KNOW WHAT COCAINE OR GRASS OR GOLF IS.

Duncan is not typically a grass eater, but I'd heard that dogs sometimes eat grass when they have upset tummies because it helps them throw up. So I thought this was good and I shouldn't interrupt the feast. But also, it felt really weird to just . . . let him eat grass?

I stood on the edge of the yard, debating whether I should encourage or stop this. Ultimately I opted to do both, allowing it to go on for a while and then eventually pulling him away and taking him back inside. I told Sky about the grass eating. Sky scooped Duncan out of my arms, scolded me for stopping him, and lectured me something about "he knows what his body needs so let's let him eat as much grass as he wants."

By the time I finished shouting "that dog would eat an entire chocolate cake if we let him" Sky and Duncan were already out the door and in the backyard again. Three minutes later Sky came back in carrying Duncan and saying "yeah I had to stop him. He was eating a lot of grass and it freaked me out."

The licking then slowed down and Duncan started drinking water, which we thought was probably a good sign. Eventually we went back to bed where he lay curled up between us all night, occasionally whining.

By morning he seemed pretty fine, albeit tired. The part of the internet that told us this was absolutely nothing seems to have won. So far.

"How do you think we handled our first parenting emergency?" Skylar asked me when we woke up, smiling and nodding his head like we had just played a great game of tennis.

"Well, let's see. We called the hospital because our dog threw up. We had a fight about how much grass we should allow him to eat at 2:00 in the morning. And then after he ate all that grass, we put him back in bed. With us."

"Yeah. I think we're going to be good parents."

[P.S. please check out my article I published this week on my embarrassing teenage obsession with the first Utah reality TV stars, if for no other reason to see the incredible piece of art our graphic designer made for it.]

This time in Strangerville, Eli is not sharing his opinions anymore and Meg is FINE WITH THAT. Also, a story about how the benefits of technology probably outweigh the negatives. Segment: Is Technology Really All That Bad, by Eli McCann (music by Superoro) [https: 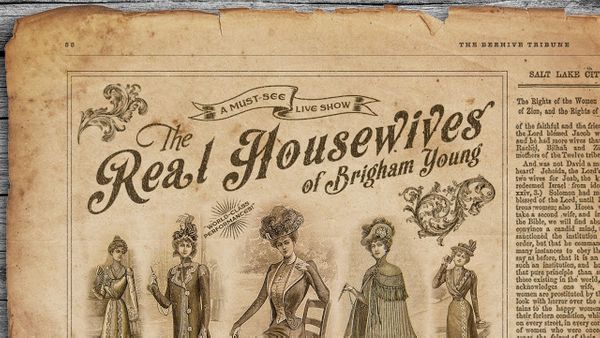 The hot young people hardly older than us were a televised testament that we too could be trusted to navigate complicated adulthood.