They shuttle you to the tippiest top of the toppiest mountain at negative eleventy in the morning for the Pioneer Day marathon. I was already in shock before the alarm went off because I had assumed that the Pioneer Day marathon and Pioneer Day parade would be on, oh, I don't know, Pioneer Day. But I discovered just a few days ago that instead they decided to do it a day early. On a weekday. Instead of the much more convenient Saturday when I thought this thing was happening.

Skylar had to drive me to the shuttle. He literally screamed when his alarm went off. Like a straight up high-pitched guttural screech, so loud that it advanced Climate Change at least a decade.

I had prepped him for all of this well in advance. "We have to leave the house at 3:20 AM. You need to get your brain to accept that now."

So by the time it happened he looked like he wasn't mad, just disappointed, which was fine.

Half an hour later I was lying at the mountain peak wondering why the hell they make us get to the starting line of this stupid race 90 full minutes before it starts.

This is the 8th or 9th time I've done this marathon. It's not a very popular one because the course is the stuff of nightmares. You spend the majority of the first 15 miles descending a mountain, which is much worse than you think. By the time you immerge from the canyon, every muscle in your legs could star in it's own telethon raising money for a cure.

It was at that point that I came across Skylar and Duncan, standing on the side of the road holding up a sign that said "You McCann Do It."

One thing I've learned in these long-distance races over the years is that they make me extremely emotional.

I'm a crier. I don't know when or how this happened to me. Up until about seven years ago, my emotions were made of steel. I was honestly worried for a long time that I was a psychopath because I was physically incapable of crying.

I got choked up this morning because my dog went potty and it made me remember potty training him as a puppy. That's a real thing that happened today. I cried because my dog took a shit.

Not to get SERIOUS. But I have a theory that The Great Change is a direct result of me coming out. I think for a long time everything was so bottled up and I was so private and intense that it had the effect of forcing everything to stay deep down. Then I told everyone I was a big fat homo and now I cry recounting to Skylar plots of TV shows THAT ARE COMEDIES.

So, yeah. I cry a lot now. But never as easily as I do deep into a long-distance race. So when I saw Sky with that absolutely stupid sign, it just opened the floodgates because I couldn't stop thinking about how fortunate I am to have him and how truly, honestly baffling it is to me that of everyone in the world, I'm the idiot he chooses to be with.

I really mean that. I have a working theory that I can't be talked out of that Skylar could have picked anyone in the entire world and they would have married him. Trust me. I dated this man. Once he chooses you, there's no way out.

The only thing that snapped me out of the painful and completely unhelpful sob-fest was when, a few minutes after I passed him, I realized he had yelled "you are the fastest one here!" at me, despite having just watched 80 other people go by first.

He never was very good at sports or math.

He also made another sign that said "Welcome Home Elder McCann."

When I asked him after the race "why?" he just shrugged his shoulders and said, "you know. The airport!"

I finished the stupid race. Sky and my parents greeted me at the finish line. I came in 10 minutes faster than I thought I would and that was honestly shocking to me because I really did not train for this very well.

On the walk back to the car I held onto Sky's shoulder with one hand to stabilize myself.

As I began explaining it to him, I started crying all over again.

Please enjoy this incredibly gripping story this week on Strangerville:

This time in Strangerville, have you ever had a brief but meaningful encounter with a stranger that left an impact? One man tells the story of his day at Stonehenge and how it changed the course of his life. Also, only 5-star hotels for Meg from here on. 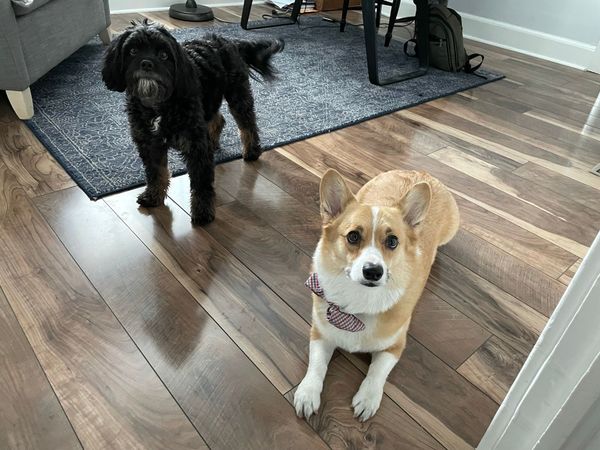 We're dogsitting a new dog so naturally Duncan is being very clingy. This animal I birthed does not care for change. (I would tell you the full graphic birthing story

This time in Strangerville, have you ever had a brief but meaningful encounter with a stranger that left an impact? One man tells the story of his day at Stonehenge and how it changed the course of his life. Also, only 5-star hotels for