Today I drove through snow to get to Ogden to see Andrei and Luda. Both of them have had an incredible impact on me and although I hadn't seen either of them for over two years, I have thought about them often. It took longer than usual to get there but we finally arrived at a mall where we were supposed to meet them. They were in Bath and Body Works together smelling candles and when I saw them standing there it didn't seem real. We hugged over and over again and Luda couldn't stop crying. After shopping for a little while longer we went to the Garrett's house for dinner. We all sat around the table and brother Garrett asked Andrei to say the prayer in Ukrainian. As he started to pray, the moment seemed so surreal and I had a very vivid flashback~
Three years ago at this time I was just getting ready to move from Rivne to Lutsk, two cities that are very similar to each other in many ways. I was apprehensive about the move as I had so quickly become attached to Rivne and all the wonderful people that lived there.
It was October 26th, 2004 when I first met Andrei. He was just a lost eighteen year old kid who stumbled into our English classes because of the encouragement from his friend, Roman, who had been attending. After class that night Sister Garrett asked if I would come with her to help teach these boys about the church. We talked and taught and answered their interesting questions until Sister Garrett asked them if we could end with a prayer. After we prayed, Andrei commented that we pray so weird and left after weakly committing to do some reading in the Book of Mormon. We continued to meet with these two boys often and so rarely felt that we were making any progress with them. Each time I would ask Andrei if he had prayed and each time he would uncomfortably say that he had but that he had received no answer. On November 4th, I wrote in my journal, "I met with Andrei. We talked about prayer and I asked him if he would pray tonight. He said, 'I'll try.' I told him that I hate that answer. It's either 'yes' or 'no.' So he said 'yes.' I hope he does."
In between meetings with Andrei, we had a lot of experiences with Luda, who was only 16 at the time. She would bring friends to church and English classes and tell them that the gospel was the most important thing in her life and she would ask them if they would please investigate it to see what kind of happiness it could bring them. We taught many people because of her and witnessed some remarkable conversions in the process. In each lesson she would sit in, she would testify over and over again how much potential the gospel has to bless families which was probably bitter-sweet for her coming from a part member family.
As time went on I became so frustrated with Andrei. He told me that he felt that he wasn't getting answers because he didn't really want to find out. On November 19th, I wrote "I don't know what to do with Roman and Andrei anymore. they hardly talk on discussions now so I can't tell what they are feeling." That night I went home very discouraged and I told my companion that I thought we shouldn't meet with Andrei anymore. But I couldn't sleep. I just felt so uneasy and after several hours I began to pray and I asked Heavenly Father if we needed to continue to meet with Andrei. An overwhelming feeling came over me that the work with Andrei was far from finished and I made a new commit that I would not give up on him although logically it seemed right.
I left Lutsk shortly after that night, wondering what would ever happen to Andrei. The night I boarded the train to Kyiv, Luda stopped by and handed me a note, part of which read, "I really know this church is true. A few years ago I really strongly felt this and I still feel it today. Regardless of all the obstacles, I know that Heavenly Father prepared the plan of salvation for us. In the end, we can be with him." Reading this letter as the train slowly pulled away from that city, I thought, "Everything is going to be all right in that town," sure that the Lord had just placed some of the most remarkable people I had ever met in it.
So there I was tonight sitting accross the table next to a teary-eyed Luda and across from a now praying Andrei, almost three years since the first day I met and prayed with him. I thought about how great it felt that day just a few months after that night to get a call informing me that he was going to be baptized. Once again I wondered as I watched him tonight what was ever going to happen to him after he returns to Ukraine in a couple of days but as I heard him utter the words of the prayer, the prayer he denounced just three years previously, I thought once again, "Everything really is going to be all right." 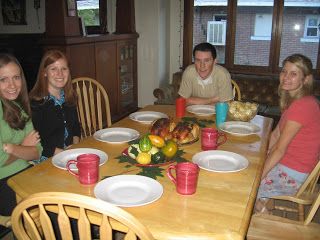 Due credit must be given and I cannot claim that anyone pictured here invented Fakesgiving but I will say that each of us, and especially the picture taker, Kalli, perfected 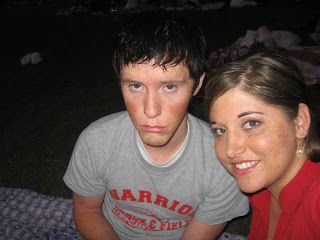 So last night I went to Kalli's and Heather Twistysocks' place to try to get some homework done because I couldn't be in my house any longer and, just as