I finally broke down and took one of those personality tests because the world has now come to a point that if you don't know what "color" you are, you can't have a normal conversation. I have been told multiple times lately that I'm a "red" but it hasn't meant much to me as I've never taken an active part in finding out what a "red" is. So I took the test last night so that a computer could tell me who I am because that's the way we have to do it now as opposed to driving into the mountains to do sincere soul searching like we used to back in the eighties (of course I was only 6 when the eighties were ending but I'm sure that's how we did it in the eighties). Apparently my friends and the computer are on the same page because I was told once again, electronically this time, that I am definitely "red". Well I read the description and may or may not be offended at this point as the "red" personality seemed to have everything to do with being bossy, impatient, irritable, and sometimes just downright scary; the concern was that my friends all tell me that my personality is "red" which I think is a nice code word for all the negative things I just explained that "red" describes. I'm now convinced that the whole color code system is in place just so people can attack one another's personalities without using harsh words. That's why when you hear someone talking about a person that they have some sort of a conflict with, today we don't say, "she's selfish, arrogant and obnoxious!" We say, "she's a very 'red' personality." We don't say, "Tommy's irresponsible, lazy, and indecisive!" We say with humorous chuckle (as if the chuckle itself removes the critical responsibility from us), "Tommy is just so yellow, isn't he?" It's just so tough to live in a world where you have to Google colors to find out what someone really thinks about you. What will they think of next? 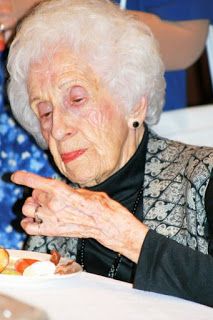 I went to see Great Grandma Whittle the other day and I'm always amazed with how active she is at such a ripe old age. Next may she will be

In the interest of giving my friends a break from providing my 24 hour free therapy service, I bring you this blog.  Its intent, to house my thoughts, especially the strange ones, and bring balance to the world.  It also serves as a sad