I feel pretty confident in most day-to-day situations; this is probably a result of becoming desensitized through a life full of embarrassing and uncomfortable experiences. One glaring exception to my maintaining confidence, I've come to find recently, is whenever I'm put in a situation where I have to discuss cell phones with people at cell phone stores.

To give some background, I decided a few months ago that it was probably time to trade in my old phone for one that works. My friends all around me have had the phones for a while that also function as 12 other electronics and common house-hold appliances. I swear I saw one friend ride his phone to work one day. Mine on the other hand, at least when I first bought it back in 1919, did what phones are supposed to do: it made and received phone calls with 30% accuracy. So while Suzy Q down the street was using her phone to make a latte, and Jackie P up the street was using hers to scan the Earth for volcanic activity, I was climbing to the top of the highest building in order to get reception that would allow me to call my parents to try to find out if they still love me even though I'm in nearing 60 and I'm not married with 12 kids yet.

Getting a new phone was not a jealousy issue as I'm quite uncomfortable with the fact that phones now could very well have the ability to take over the world if the Earth tilts just right. I just wanted one that would stop dropping people out of my phone or randomly switching names and phone numbers which resulted in one slightly embarrassing text message last week which was sent to the wrong person. Actually it was a whole text conversation which I later found out was very confusing to the person on the receiving end. This was much less tragic than an extremely embarrassing text I sent a few weeks ago to an entirely wrong person; that one wasn't the fault of the phone however, but was human error. And I would be lying if I said that an obscenity didn't escape my tongue within one second of sending the text.

So a couple of months ago I broke down and went to the cell phone store with every intention of buying a new one. It was high time anyway as the Panguitch Historical Society of Utah has been begging me to donate my old phone to their 1920's collection at their local museum. I brought my two older sisters with me and explained very CLEARLY that I needed their help because I didn't know what I was doing. Sure enough, as only sisters can do, as soon as the salesperson started asking me questions they got lost in some conversation with each other (probably about hair products) and then the next thing I knew, I was completely on my own. I heard the girl say things like "data plan" and "microconfigeration of the cepticide" and "makes the best lattes" and all I could do was smile and say "I'm going to think about this for a while and come back" while slowly taking steps backward toward the door. It took all the way until we got back to the car for my sisters to notice we had left the store empty-handed.

So on Monday I took Krishelle with me again (I figured this would be easier if I only brought one sister) and coached her very well before we left, explaining that I needed her undivided attention the entire time in the store. She came through and pretty much handled the transaction like she was my mom. I was ok with it though; she somehow got me a discount.

Now I have a problem. I have this great phone which looks really nice but I don't know how to use it. I've missed several calls because I either can't figure out that someone is calling or I don't know how to answer it. Also, it has this out-of-control feature where you tell it what to do and it just does it ("call home," "walk the dog," "blow up Mongolia," etc.). Two nights ago I rolled over on the phone at about 2:00AM and heard the robot woman voice say, "calling Diana." I started screaming at the phone "NO! STAY! STOP! DON'T CALL ANYONE! TURN OFF! SELF-DESTRUCT!" When none of those commands worked I started pushing buttons until it stopped calling; somehow in the process I sent a text to my friend Jason that said, "Tr!,'-d." He never did respond.

Over the course of the next few days my pocket called 4 people and left messages on their voice mails.

On a side note, we stopped at Bath and Body Works on Monday before leaving the mall where I experimented with about 12 different "try me" cans of lotions and I think I may have found a combination of over-priced name-brand products that could permanently cure my foot disease. A huge sigh of relief for everyone. Fingers crossed! 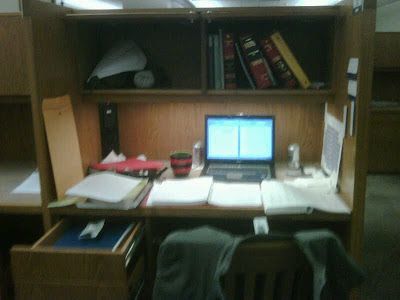 It was the best of times, it was the worst of times. Last week was the craziest week of my life! And this is coming from someone who had an 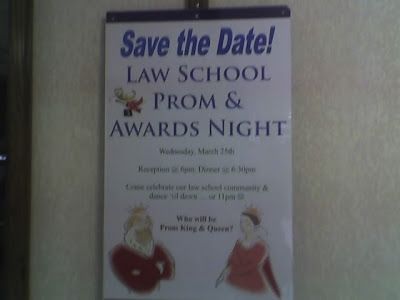 Now you have proof. This is an actual poster hanging up in the law building. And yes, it does say "Who will be Prom King & Queen" at the bottom.