Hey strangers. The haggard and terrified Eli of one week ago reports to you now from the edge of the world, buried deep in the Pacific, one small breeze away from devastating hurricane.

We arrived on Tuesday night in Palau, exactly 745 hours after leaving Salt Lake City, and were greeted by a couple of people from the court. They drove us through the dark islands connected by long bridges, through the jungle and to our apartment. The entire way I tried desperately to enjoy my first view of Palau while crying silently to myself because of a sad experience at the bag carousel at the airport only moments before.

I checked three bags. Only two came around.

That means I was missing one, for those who were searching for your calculators.

Remarkably, the soft-cased guitar survived the journey with not a scratch. But the giant bag with LITERALLY all my clothes except for the ones I was wearing at the time was never to be seen. I watched the same four bags that nobody seemed to want go around and around and around, hoping that they would somehow turn into mine.


Well, they didn't. And I was escorted over to a little desk with a woman who told me they would totally find it and how hard could that be because it's probably just somewhere between Palau and Salt Lake City? Unless it got stuck on a plane to Siberia. Or Topeka. Or unless someone stole it. Or unless the tags got ripped off and China Air donated it to the Communist Party.

I know. I'm the idiot who packed all his clothes in one bag instead of spreading them out. I practically asked for this to happen. But seriously, can you think of a less tacky time to throw that in my face? I didn't point fingers at you when you when you told me you had herpies. Although I definitely could have.

Fortunately Daniel is here and all 200,000 items of clothing that he shipped, packed, and wore, made it to Palau and even smelled good. Unfortunately Daniel is technically a giant (this has been scientifically proven). At 6 foot 6 and with size 16 shoes, his clothes aren't exactly a perfect fit. But it's better (and by "better" I mean "more legal") than going around naked. So here I sit in a shirt that goes all the way to my knees.

I mean, I hoped to be able to run around this island naked for a year. But I wanted that to be by choice, not necessity.

I have called the airport around 5 times a day since getting here and each time I'm routed to a different person who asks me for a description of my bag as though the airport is hearing about the problem just now for the first time.

Last night when I called I was given a very long explanation for what the airline had done to try to track my bag to no avail. When the explanation concluded I asked for clarification, "so you have no idea where in the world my things are?" Seeming to not understand what outcome I am hoping for, the agent triumphantly answered, "Correct sir! We have absolutely no idea what happened to your bag!"

In the meantime, our boxes arrived. All 23 were shipped by USPS. And all 23 looked like they had been attacked by a hatchet and then sat on by an elephant. Chunks were taken out of the sides of the boxes and one large blue plastic bowl was shattered into a million pieces. The post office wasn't kidding when I tried to ship my tv and just before they sent it off I asked whether it would be safe and they responded, "oh, it will totally get destroyed in transit." I thought they were being sarcastic at the time, but I had them switch the shipping to express and I insured it, just in case.

Gosh, the government is good at doing things.

But none of this can stop me from recognizing how beautiful this place is. My apartment sits on the side of a very steep hill on a small island and the large balcony overlooks mangroves, oceans, and other islands. It's heavenly.

About 12 hours after landing in Palau, I was already in my office getting oriented on the work here. It should be an interesting and challenging year trying to figure out the best ways to be valuable.

But first, I need to find clothes. 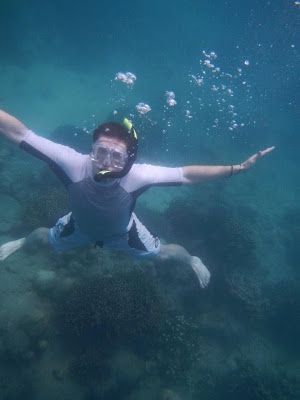 Mere moments after I informed you of my China Air lost bag naked wanderer catastrophe of last week, I received a phone call informing me that my bag was found

I'm sitting in an airport in Taipei now with Daniel. This is our second layover of two. Our first was in San Francisco where my dear friend Elsa picked us up and drove us across the Golden Gate bridge for some dinner and one