One of the strangest parts about living in a tiny tropical island nation for me is the slow pace of life. I mean, I know I didn't move here from Times Square. I came from Salt Lake City. Life isn't incredibly fast-paced there either. But there was stuff. I had stuff going on. Things happened. I had a schedule. Sometimes I had deadlines. I raced from things to other things.

In Palau, nobody is in a hurry to get anywhere or do anything. I swear to you if you called for an ambulance in Palau, this is what would happen:

1. Nobody would answer the phone.

That's it. Just one. No other steps to the phone-an-ambulance situation. It would end right at nobody answering the phone.

Are there people on the other end hearing the phone ring? Maybe. Are they busy? Definitely not. No. Not at all busy. So why didn't they answer the phone? Because it's hot. And they weren't close to the phone. And it's hot.

This not-being-in-a-hurry thing affects absolutely ever facet of island living. For example: there is basically one road in Palau. That road is almost always packed with cars. There is a middle turning lane that is usually wide open. So, whenever we're feeling extra efficient, we always just drive down the middle lane until we're ready to get back into traffic. Sometimes this is like 2 miles of driving past the non-moving cars. And everyone watches us go by. And they smile and wave. And then they let us right back into the right lane when we're ready to join everyone else. And nobody is mad about it.

And why should they be?

Nobody is in a hurry to get anywhere.

I cannot emphasize this enough. I tried by using italics and underlining it. But I don't feel like that emphasized it enough.

Last month the power company forgot to send me my power bill. I asked for it a number of times before finally just walking into the power company and finding a person who looked to be in charge. He dug the bill out for me and handed it over.

Guys. I was like 3 and a half weeks passed the due date on the bill. And a full 2 weeks passed what was listed as the "disconnection" date.

I live in a country that is so laid back that the power company doesn't even bother turning off my power when I stop paying my bill.

Ok. So far the only examples I've given you to explain how slowly things move here make it sound like it's paradise to live in Palau. Right now you're all like, "So Eli lives in a place where you never have to wait in traffic or pay your power bill and yet he complains about it?" I can feel you guys ganging up on me. It's not fair. I can't take you on all at once. That's why I'm going to tell you this story.

Two days ago I tried to buy milk. The person in line in front of me at the store turned her purse upside down and dropped sixty dollars of change in front of the register. SIXTY. DOLLARS. OF. CHANGE. How do I know it was SIXTY DOLLARS? Because I stood there watching them count. Until they got to twenty dollars. Then I started helping. Until we, altogether, got to SIXTY dollars.

I wish that you had been working at this store that day. Because that is NOT how they counted those coins. It was like this:

Guys. ALL I wanted was to buy some freaking milk. It took 18 minutes. I timed it. I timed it because I knew it was going to take a long time because it always does and I wanted to give you a specific amount of minutes when I told you the story. So you would know. So you would know that Eli isn't complaining that he had to wait in a three minute line because there were a bunch of people ahead of him.

The milk was warm before I even walked out of the store.

But Palauans? You just can't stay mad at them. Because when it was my turn to check out, the cashier gave me a big betelnut-tooth-stained smile, giggled through a joke I didn't understand, and then said that she saw me out running the other day and was worried that I was going to over-heat. And I just wanted to take her home with me, sit out on the front porch in rocking-chairs, and talk about the weather all evening.

And that's why nobody is in a hurry here.

As many of you have figured out by now, my time in Palau has been sort of a roller coaster for me in a lot of ways. This experience has been so much more difficult than I ever expected it to be. I've talked 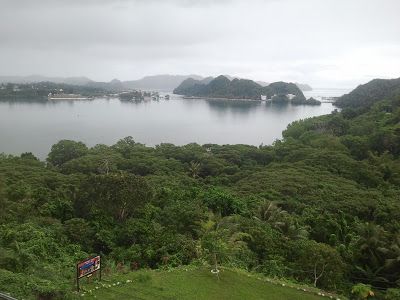 Happy weekend, Strangers. Today I give you another set of pictures and distractions. Have a safe weekend and please be careful on those roads. Oh, and since it's been a